The four end-use sectors in the United States—residential, commercial, industrial, and transportation—consume a mix of fossil fuels (petroleum, natural gas, and coal), as well as renewable energy sources and electricity, to meet their energy needs. To compare and aggregate data from these different energy sources, the U.S. Energy Information Administration (EIA) measures consumption in a common energy unit, British thermal units (Btu), which describes the heat content of the fuels. EIA uses thermal conversion factors to convert the physical units that are generally measured and reported (such as barrels of petroleum or cubic feet of natural gas) into heat content values. 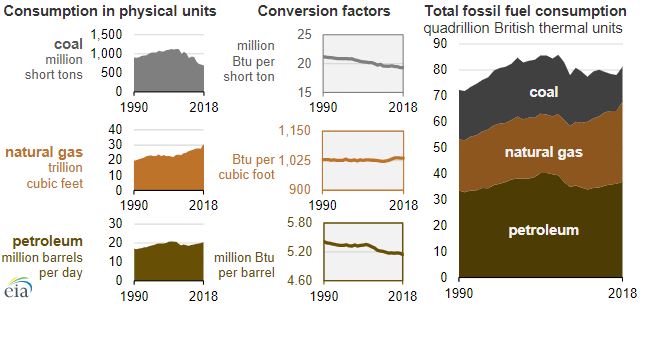 For fossil fuels, the thermal conversion factors are based on the thermal energy released by burning or processing the fuels, also called their heat content. A decrease in heat content means that more physical units of a fuel would need to be consumed for the same useful heat output, increasing the total physical units but not the heat units. The aggregate heat contents of petroleum, natural gas, and coal vary based on the mix of component products being consumed.

EIA bases its estimates of the heat content of U.S. natural gas on data reported in the EIA-176 and EIA-923 surveys, and these estimates have been relatively stable since 1990. Methane, the primary component of natural gas, has a heat content of 1,010 Btu per cubic foot. Other gases such as ethane and other compounds, which may be left in the natural gas stream that is delivered to customers, have higher heat content values. Highly consistent specifications for natural gas accepted by pipelines into an integrated U.S. pipeline system have kept heat content consistent. 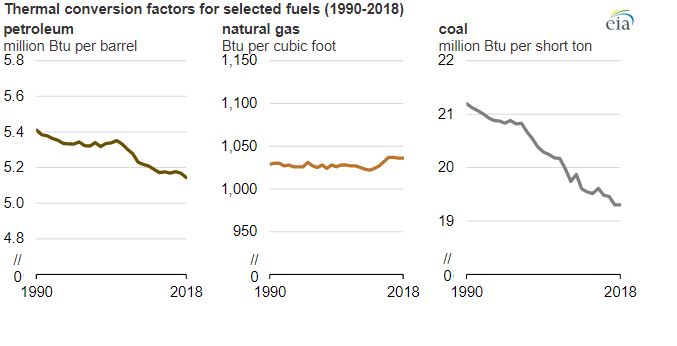 Similarly, EIA bases its estimates of coal’s heat content on data reported on the EIA-3 and EIA-923 surveys. The total coal thermal conversion factor depends on the relative mix of coal types consumed that year. Anthracite and bituminous coals have higher heat contents than lignite and subbituminous coals. The share of U.S. coal consumption from subbituminous coal has increased over time, bringing down coal’s aggregate heat content.
Source: EIA