Greek real GDP grew 8.3% in 2021, in line with Fitch’s forecasts, and Fitch expects the post-pandemic recovery to continue this year, underpinned by a further recovery in tourism and accelerating deployment of NextGenerationEU funds. Nevertheless, Fitch cut its 2022 growth forecast to 3.5% from 4.1%. Fitch also cut its 2023 forecast to 3.2% due to higher prices, lower confidence, and weaker growth in key trading partners following Russia’s invasion of Ukraine.

Survey data point to sharp declines in business and consumer confidence in March and April. Consumer price inflation has risen sharply, mainly on higher energy prices, but also base effects from deflation in spring 2021. Additionally, Russia supplies around 40% of Greece’s natural gas imports and 11% of primary energy consumption. The ECB calculates that Greek gross value added could decline by 0.8% if gas supply fell by 10%, leading to rationing. In the Bank of Greece’s recent adverse scenario, which includes prolonged energy-supply and supply-chain disruptions, 2022 GDP growth would be 2pp below the central bank’s pre-war baseline, and 1pp below its new baseline (3.8%), while CPI inflation would average 7%.

Public finances in 2021 improved more than we expected. The general government deficit fell to 7.4% of GDP (2020: 10.2%), lower than our 9.6% estimate. However, we expect a slower deficit decline in 2022–2023 than previously forecast, due to the more subdued macroeconomic backdrop and the government measures to soften the impact of high energy prices – the government allocated an additional EUR2.0 billion (around 1% of forecast GDP) to this last month. We now expect the government deficit to decline to 4.8% this year, and 3.1% in 2023. Our 2023 forecast assumes some energy-related budgetary support persists beyond this year. This is consistent with the latest measures announced on 6 May, some of which will last for 12 months from July. 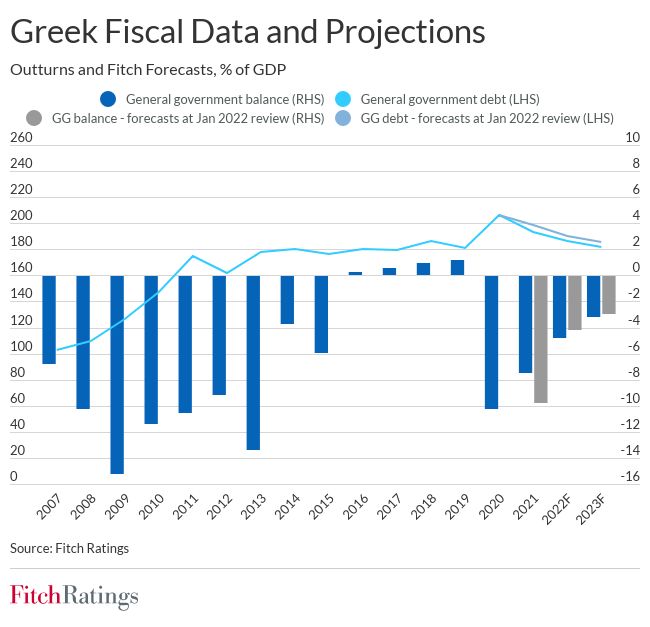 Government debt/GDP fell to 193.3% at end-2021, slightly below our estimate of 195.0%. Our fiscal projections imply that the debt ratio will decline to around 182% by 2023, despite slower deficit reduction, with still-strong nominal growth dynamics implying a positive growth-interest differential. They assume the Greek state’s cash buffer position declines by around 1.8% of GDP this year.

Government debt will remain elevated for a long time – our 2023 projection is around 3.3x the ‘BB’ category median – but mitigating factors should support public debt sustainability. Greece’s liquid asset buffer will remain sizeable, at around 15% of GDP at year-end. Government bond yields have risen sharply, but the low marketable share of debt (around 24% for central government debt), and an average maturity of 20.5 years mitigate the impact on debt-servicing costs. If bond yields rose further to 4% (from 3.6% today), we estimate that the 2023 interest-revenue ratio would be 5.9%, versus the projected ‘BB’ median of 9.0%. The concessional status of most Greek debt means amortisation schedules are manageable, helped also by April’s repayment of outstanding IMF loans, two years ahead of schedule. 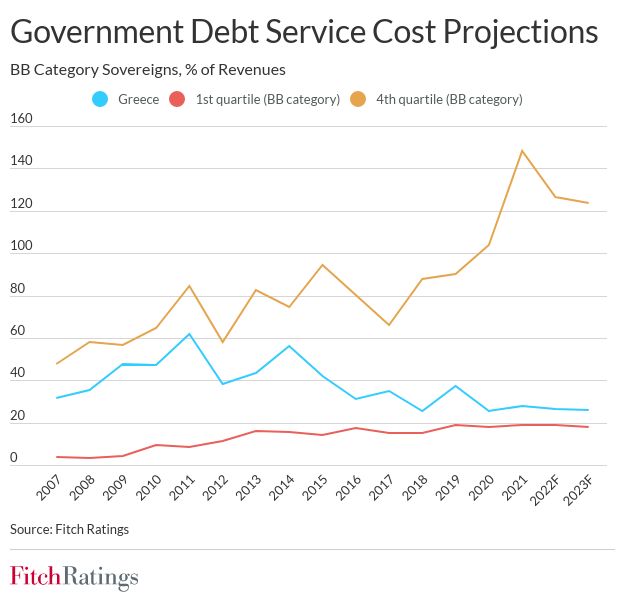 The ECB’s December announcement that pandemic emergency purchase programme reinvestments can be adjusted in periods of market stress supports debt sustainability. The ECB has indicated that in the reinvestment period, Greek government bonds will be eligible collateral for refinancing operations by Greek banks.

Confidence in a firm downward path for the government debt/GDP ratio and continued asset-quality improvement by systemically important banks could lead to an upgrade of Greece’s ratings.
Source: Fitch Ratings

Back to the future? Cargo giant Cargill turns to sails to cut carbon