The lack of requests for the European Stability Mechanism’s (ESM) coronavirus-related credit lines may partly reflect perceptions among eurozone member states that it is a lender of last resort whose loans would be subject to strict conditionality, Fitch Ratings says. In the medium term, if this perception among its shareholders hampered ESM reform it could weaken our assessment of its policy importance, which is a key driver underpinning the ESM’s ‘AAA’/Stable rating.

As part of the EU’s response to the pandemic, the ESM has offered Enhanced Conditions Credit Lines (ECCLs) for Pandemic Crisis Support (PCS) to eurozone members worth up to 2% of a borrower’s 2019 GDP (EUR240 billion for the bloc). PCS ECCLs have limited conditionality, with the only requirement being that they are used to address the impact of the coronavirus.

The ESM would finance these loans through new market debt issuance and pass on its funding costs plus a small margin to its borrowers. Fitch calculates that, despite the tightening in eurozone sovereign yield spreads since PCS ECCLs were announced in May, they remain attractive purely from a pricing perspective for at least seven countries, who could borrow up to EUR68 billion. The largest interest savings would be for Italy, of up to EUR2.9 billion (0.2% of GDP) over the life of a 10-year loan (the maximum average ECCL maturity). 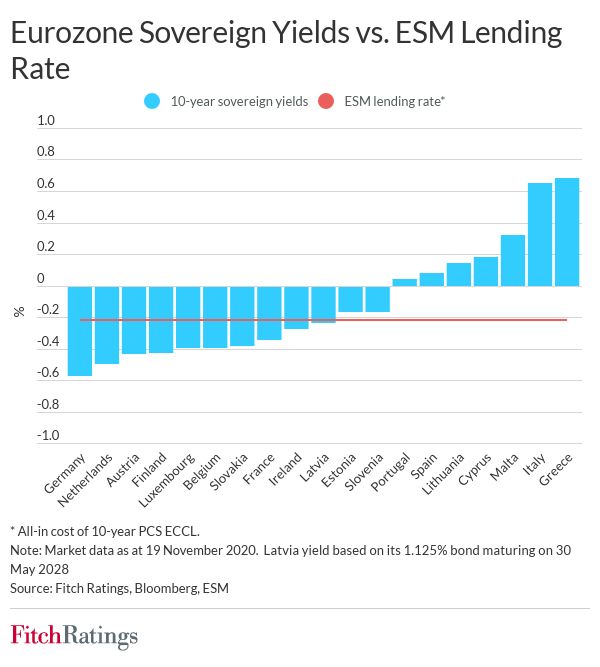 Nevertheless, no eurozone country has requested ESM funding as part of its coronavirus response so far. This may reflect a perceived stigma around borrowing from the ESM. Some countries may still see its role as to lend under strict conditionality to eurozone sovereigns that have lost market access, reflecting its roots in the eurozone crisis. It also reflects the strong liquidity enjoyed by eurozone sovereigns. Market funding costs are lower than pre-pandemic as ECB policy, including its EUR1.35 trillion Pandemic Emergency Purchase Programme, has pushed down yields.

This contrasts with demand for European Union (AAA/Stable) pandemic funding. Loans worth EUR88 billion have been approved under the EU’s EUR100 billion SURE programme, to fund short-term job support schemes. In addition, Fitch understands that several countries have started work on programmes to access the EU’s EUR750 billion Next Generation EU (NGEU) coronavirus recovery fund, of which EUR390 billion will be in grants, which could make it more attractive than ECCLs despite greater conditionality.

The ESM will offer PCS ECCLs until end-2022, during which time the relative attraction of different European funding instruments may shift. For example, a marked delay in activating the NGEU could increase borrower appetite for PCS ECCLs, as could a deterioration in sovereign borrowing conditions.

On reforms, Fitch’s assumes that the ESM’s position in the EZ’s institutional framework will be enhanced as it becomes the backstop fund of the bloc’s Single Resolution Fund (SRF), potentially extending loans for bank resolutions if the SRF’s own resources were depleted and taking a bigger role alongside the European Commission in tackling future crises. These reforms were agreed by eurozone finance ministers pre-pandemic and would strengthen the ESM’s public mandate, as we noted when we affirmed its rating in July.

However, implementation has been on hold during the pandemic. If the reform process, which requires an amendment of the ESM Treaty to be approved and ratified by all eurozone countries, did not proceed, this could weaken our assessment of its policy importance, all things equal. The ESM’s ‘low’ risk business profile primarily reflects excellent governance and an assumption of the continued importance of its public mandate, primarily because of its role as the eurozone’s crisis resolution fund, and leads to a three-notch uplift from our ‘aa-’ solvency assessment.
Source: Fitch Ratings

2020-11-21
hellenicshippingnews..
Previous: Investors rush to buy equities, dump gold in vaccine euphoria
Next: G20 determined to use all tools to contain pandemic, save jobs, incomes