The EU’s new gas market correction mechanism could have an impact on financial and energy markets in the future, the European Securities and Markets Authority (ESMA) and regulatory body ACER said in separate reports Jan. 23.

However, ESMA and ACER both said they had not yet identified any “significant” impacts that could be “unequivocally and directly” attributed to the mechanism since it was adopted last month.

ESMA and ACER were tasked with producing preliminary reports on the impacts of the new mechanism, which is set to come into effect on Feb. 15, by a Jan. 23 deadline.

While stressing that they had not identified significant impacts — either positive or negative — from the new mechanism since it was adopted, ESMA and ACER both said this did not mean it “might not have any impact on financial and energy markets in the future.”

To be triggered, the mechanism requires the TTF month-ahead price to exceed Eur180/MWh for three working days and the month-ahead TTF price to be Eur35/MWh higher than a global LNG reference price at the same time.

Platts, part of S&P Global Commodity Insights, assessed the benchmark Dutch TTF month-ahead price at an all-time high of Eur319.98/MWh on Aug. 26.
Prices have weakened since on the back of healthy storage and demand curtailments with Platts assessing the TTF month-ahead price on Jan. 20 at Eur67.58/MWh.

There have been concerns about the impact of the new mechanism expressed by exchange operators ICE and EEX, as well as EU trader association EFET, with ICE saying it would have to consider its options for continuing to host TTF trading.

Both ESMA and ACER said they had not identified “significant” impacts so far that resulted from the adoption of the new regulation, but that this should not be interpreted as the mechanism not having any effects on financial markets in the future.

“By curbing the key price discovery function of regulated markets, the mechanism will not come without consequences on market participants’ trading behavior and may have an effect on the ability of all market participants to effectively manage their risks,” ESMA said.

ESMA said it was also likely that market participants would adapt to the mechanism by redirecting their trading activity to contracts, venues and execution types not affected by the mechanism. 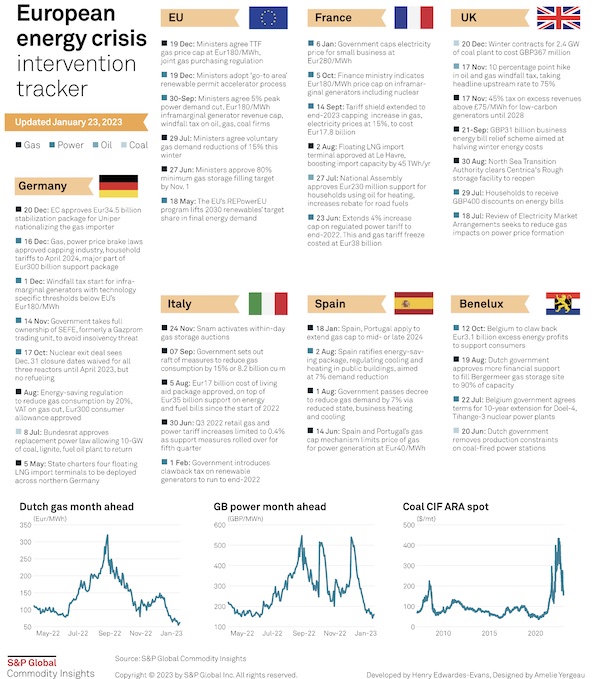 “Such adaptations could be achieved by various means, notably by shifting trading to OTC or to non-EU venues,” ESMA said.

“Moreover, market participants could shift trading to contracts with maturities not subject to the regulation or — at least for the time being — on virtual trading points different from the TTF,” it said.

ACER echoed the same views, saying the mechanism could potentially lead to the relocation of trading volumes from EU gas exchanges to other marketplaces such as the UK NBP or Chicago Mercantile Exchange (CME).

ACER also said the mechanism could have a potential impact on security of energy supply if the price levels put in place via activation of the mechanism were to lower the attractiveness of EU markets for global LNG supply.

“The mechanism could potentially lower levels of market-based gas flows between the EU’s different market areas, which would lead to a less integrated internal gas market,” it said.

ESMA said that the mechanism was also expected to impact central counterparties (CCPs) and the clearing ecosystem.

“The use of less reliable price sources for the CCP’s margin calculations and default management may affect the CCP’s ability to manage risks,” it said.

ESMA said it was “entirely possible” that some of the potential effects in the trading and clearing environment might only unfold when the activation of the mechanism is imminent.

“While this behavior would appear rational on an individual basis, it could trigger significant and abrupt changes of the broader market environment, which could impact the orderly functioning of markets, and ultimately financial stability.”

ESMA said it would carry out a more detailed assessment, including longer time series covering the period after the adoption of the mechanism, and more granular indicators by March 1.

Both ESMA and ACER are required to produce final reports on March 1.
Source: Platts

A pricey omission: not charging ships for their pollution costs the UK dearly