EU: Imports of U.S. soybeans increase by over 280%

President Juncker has now put in place a bi-monthly reporting mechanism on the evolution of trade in soybeans from the U.S. to the EU. This is the first concrete follow-up to theEU-U.S. Joint Statement agreed in Washington between Commission President Juncker and U.S. President Trump.

‘The European Union can import more soybeans from the U.S. and this is happening as we speak,’ President Juncker said today. ‘This is a win-win situation for European and American citizens.’

Commissioner for Agriculture, Phil Hogan, said: ‘The European Union and the United States have been longstanding partners and there is room to further strengthen our trade relationship. We expressed our willingness to import more soybeans from the United States and this is already happening. European and American farmers have much to gain by working together.’ 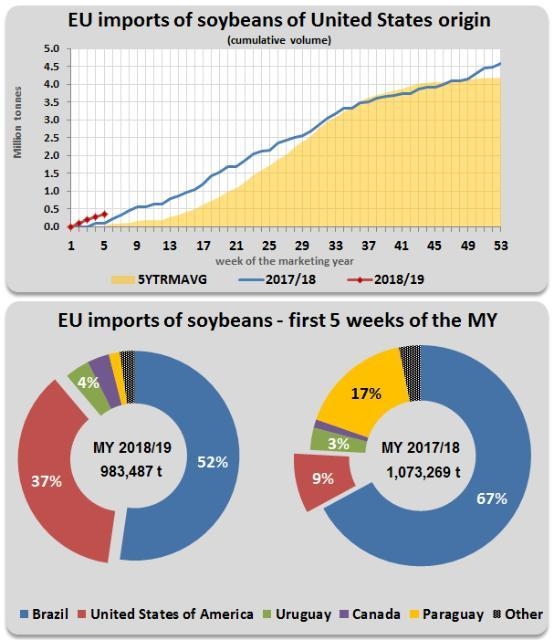 In their Joint Statement of 25 July, President Juncker and President Trump agreed that while future cooperation on trade will not include agriculture as such, the EU and U.S. would work to increase trade in soybeans. The current figures show that imports of U.S. soybeans to the EU have been increasing:

The EU needs soya in Europe as a source of protein to feed our animals, including chicken, pigs and cattle, as well as for milk production. The EU currently imports about 30 million tonnes per year because it cannot produce sufficient quantities. U.S. prices for both soybeans and soymeal are currently the most competitive on the market and therefore a very attractive feed option for European importers and users.
Source: European Commission