Ships that are sold for recycling at the end of their lifetime contain dangerous substances such as asbestos and mercury as well as toxic chemicals like oil, fuel and ballast water that constitute a risk both to human health and the environment if they are not managed and disposed of properly.

Exports of hazardous waste to non-OECD countries in EU-flagged ships being sent for recycling are banned under the Basel Convention on transboundary shipments of such waste, which has been transposed into the EU Ship Recycling Regulation (EUSRR) that requires ships to be recycled at EU-compliant yards on an approved list.

But this has not prevented a number of shipowners from circumventing the so-called Basel Ban by selling ships to cash buyers who then rename these vessels and switch them to flags of convenience.

By using cash buyers as middlemen, shipowners can obtain higher steel prices for scrap tonnage while also theoretically avoiding legal, financial and other risks when selling their old ships for dismantling.

This means formerly EU-flagged ships have ended up at yards not on the EU-approved list where they may be dismantled in a manner that poses the risk of toxic spills and other types of pollution to coastal ecosystems, as well as hazards to the health of workers.

Countering this trend, Singapore-based Sea Sentinels has taken responsibility for supervision of a number of successful sustainable ship recycling projects at South Asian and other yards that have entailed ensuring safe disposal of hazardous waste in documented compliance with regulations.

Its chief executive Rakesh Bhargava believes the EU’s proposed amendment to the Waste Shipment Regulation (WSR) would, if approved, represent “a significant step forward” as it would strongly incentivise continued improvements at these yards to gain EUSRR compliance.

The proposal would impose stricter rules on exports of hazardous waste to non-OECD countries intended to ensure that facilities receiving this waste have been audited and can manage it sustainably.

Importantly, this amendment distinguishes between EU-flagged ships on which the decision to recycle is taken inside or outside EU territory – and basically allows for those sold for scrap outside the bloc to be recycled at non-OECD facilities provided these are on the list of EU-compliant yards.

EU policymakers are now set to discuss the proposal this spring, with a vote due by year-end on the WSR amendment that would also result in changes to waste shipment rules under the EUSRR if it is ratified. 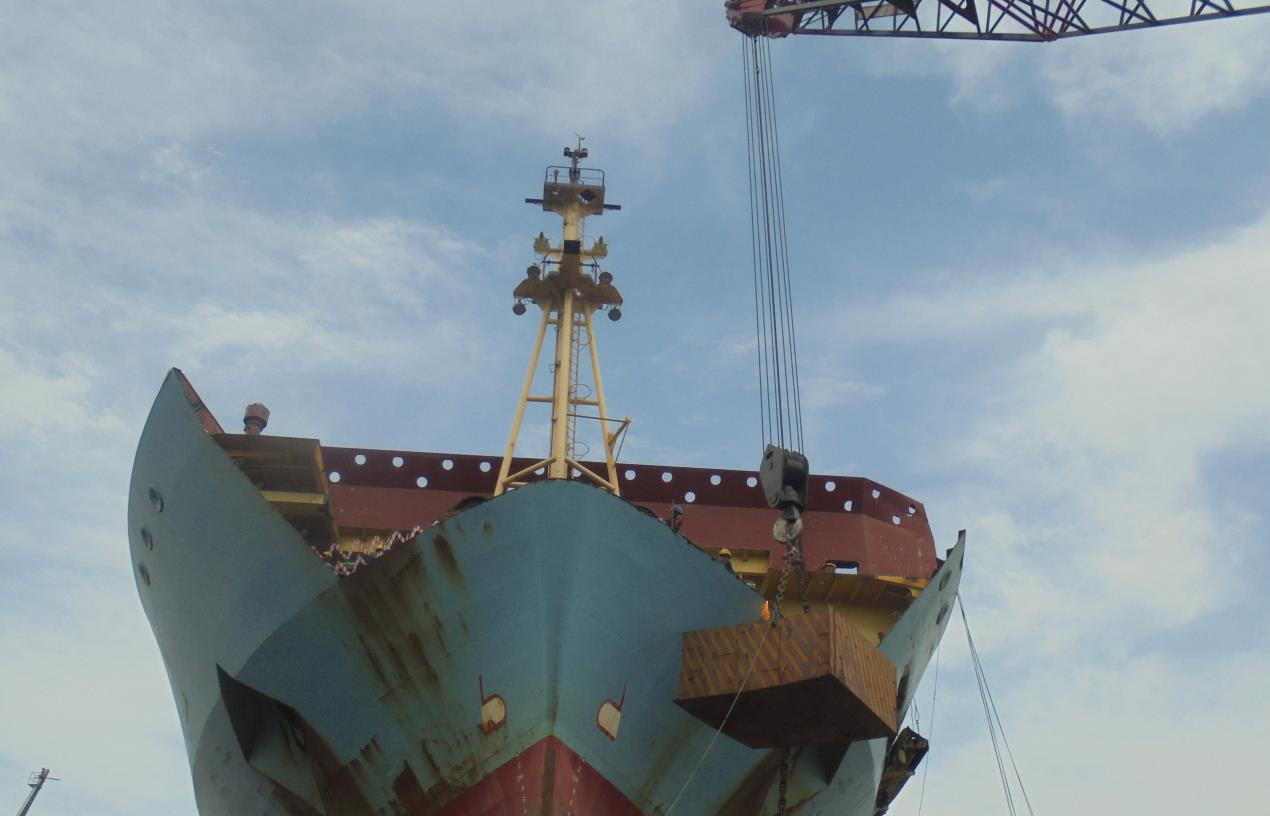 Efficient disposal of hazardous waste through a monitored collection procedure is important in the ship recycling process. Photo: Sea Sentinels

The European Community Shipowners’ Association (ECSA) is lobbying strongly in favour of the amendment that it believes would resolve a legal anomaly whereby non-OECD yards are currently unable to receive EU-flagged ships for recycling – even if they are fully EU-compliant – due to the Basel Ban.

Danish Shipping’s executive director for climate, environment and security, Maria Skipper Schwenn, has characterised the present situation as “a legal mess creating obstacles to progress on sustainability in this industry”, especially given the lack of global regulation as the IMO’s Hong Kong Convention (HKC) on safe and environmentally sound ship recycling has still not entered into force.

Bhargava says: “The EU proposal would bring much-needed legal clarity to what has been a long-standing murky issue on export of hazardous waste to shipbreaking yards in non-OECD countries.

“A number of non-OECD yards, especially in Alang, India, have made significant progress towards EU compliance by upgrading their facilities in line with the required health, safety and environmental standards.

“It is important that these are able to compete on a level playing field with European yards given that around 70% of ship tonnage recycled worldwide is already dismantled at South Asian yards.

“Furthermore, there is a lack of capacity for recycling of larger ocean-going ships at yards on the EU-approved list so it is imperative that South Asian yards continue to have an incentive to gain compliance for inclusion on the list.”

This is backed up by Bimco’s Secretary General David Loosley who states in a report on the EU list: “The capacity required for the large EU-flagged fleet simply isn’t there, which is especially evident when it comes to recycling Panamax-size and larger ships in accordance with the EU regulation.”

The current EU list of 41 recycling facilities comprises mainly European yards, most of which are limited in terms of length and draft of the vessels they can handle and are also primarily engaged in more profitable offshore/military decommissioning or repair and conversion work.

Several Turkish yards on the list offer only limited additional capacity as they are busy with recycling non-EU-flagged cruise ships, according to Bimco.

In addition, Bimco says “prices for steel at European yards are not competitive and commercially unviable”.

The ECSA states in a position paper on the WSR proposal that yards on the EU list “cover only a fraction of the capacity needed to recycle all end-of-life EU-flagged vessels worldwide”.

It is calling for the adoption of the amendment to promote progress on recycling in third countries, level up standards and improve working and environmental conditions in these countries – a key objective of the EUSRR – that could also lead to them ratifying the HKC.

Bhargava says that, due to the lack of EU-compliant recycling capability, owners of larger EU-flagged vessels are often left with no alternative than to have these reflagged so they can be sent to South Asian yards that have the required capacity.

On-site supervision and monitoring of the recycling process by an independent third party with the requisite expertise are therefore essential to enforce regulatory requirements and ensure documented compliance for the shipowner, regardless of location, according to Bhargava.

Sea Sentinels provides supervision on the ground with an expert team monitoring every step of the recycling process to achieve compliance with both the EUSRR and HKC, as well as a mandatory inventory of hazardous materials in line with the Basel Convention.

As a result, the company boasts a track record of zero accidents and zero pollution on numerous sustainable recycling projects carried out at yards in India and Turkey.

“From an environmental perspective, a lot of the focus in shipping is currently on reducing greenhouse gas emissions from operating ships. But equally important is the need to manage hazardous waste disposal for end-of-life vessels to prevent pollution to coastal waters and ecosystems,” Bhargava says.

“As well as posing a risk to the environment, irresponsible waste disposal practices can result in reputational risk to the business of the shipowner.