The euro-area economy grew faster at the start of the year than previously estimated as domestic demand bolstered output.

Gross domestic product in the currency bloc rose 0.6 percent in three months through March, the European Union’s statistics office said Thursday, revising it from 0.5 percent. The expansion was driven exclusively by spending and investment. Trade didn’t contribute to growth. 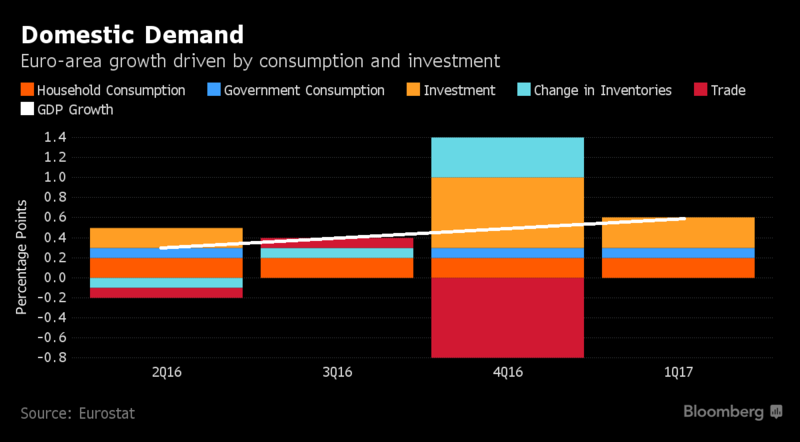 The data come as the European Central Bank wraps up its two-day Governing Council meeting in Tallinn, where officials discussed the future path of monetary policy. While a significant change in tone is not expected, investors will be listening carefully to the words President Mario Draghi will choose to describe the state of the recovery.

“The revision is good news, but not good enough to prompt changes in the policy stance due to the inflation outlook,” said Frederic Pretet, inflation and rates strategist at Scotiabank. “Having said that, the euro zone has started the year with a lot of momentum and that’s likely to continue in the second quarter based on the data we’ve seen.”

Reports have painted an optimistic picture for the euro zone, with manufacturing and services expanding at the fastest pace in six years in May, supported by job creation and business confidence. While Draghi noted in recent weeks that the upswing is becoming increasingly robust, he also argued that stimulus is still necessary to prop up inflation.

At his press conference following the ECB’s policy announcement at 1:45 p.m. Frankfurt time, Draghi is set to present updated economic forecasts. Draft projections show consumer-price growth will be cut to roughly around 1.5 percent each year in 2017, 2018 and 2019, according to euro-area officials familiar with the matter. Predictions for economic growth are likely to be revised up by about a tenth of a percentage point, the people said.

In the first quarter, household consumption rose 0.3 percent from the previous three months, contributing 0.2 percentage point to growth. Government spending was up 0.4 percent, adding 0.1 point to GDP. Investment surged 1.3 percent for a 0.3 point contribution. The economy expanded 1.9 percent from a year.
Source: Bloomberg

Teekay Offshore Partners Announces Completion of Its Acquisition by Brookfield, Changes to Board of Directors and Plan to Rebrand as Altera Infrastructure