The reasons to favor the euro are becoming increasingly hard to ignore.

The shared currency lost more than 5 percent in value against the dollar through April and May, making it “quite attractive” for Russell Investments, which oversees about $300 billion. Fading political risks surrounding Italy’s euro-skeptic coalition government and the prospect of the European Central Bank raising interest rates as early as next year also argue in favor of holding the currency, according to the Seattle-based fund. 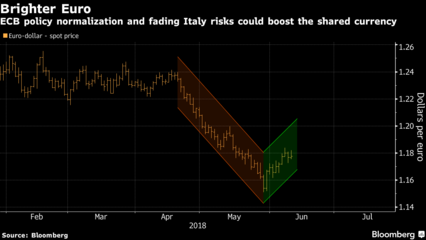 “The euro is quite attractive for a couple of reasons,” Gerard Fitzpatrick, the chief investment officer for Europe, Middle East and Africa at Russell, said in an interview with Bloomberg Television. “One is on the valuation side…and also where the potential for rising interest rates would be relative to other economies. We would be overweight the euro at the moment.”

BNP Paribas recommends going long euro against the dollar, targeting $1.2300 in three months, about 4 percent higher than its current level of about $1.1800. JPMorgan Chase & Co. strategists, who earlier this month downgraded their euro forecasts, said that the “bullish trajectory is maintained” due to ECB policy. They predict the euro will rise to $1.23 by mid-2019.

ANZ recommends buying the shared currency against the Australian dollar.

“Some calm on the political front together with a stoic ECB continuing to signal that it is moving toward tightening means that the euro is looking more positive,” ANZ analysts Daniel Been and Giulia Specchia wrote in a note to clients.

Money markets are now pricing a 10-basis point interest-rate increase in the ECB’s deposit rate in September 2019 after officials signaled that their meeting on Thursday will be pivotal for reaching a decision on when to end their asset-purchase program.
Source: Bloomberg