Euro weakness is no blessing in disguise for the eurozone 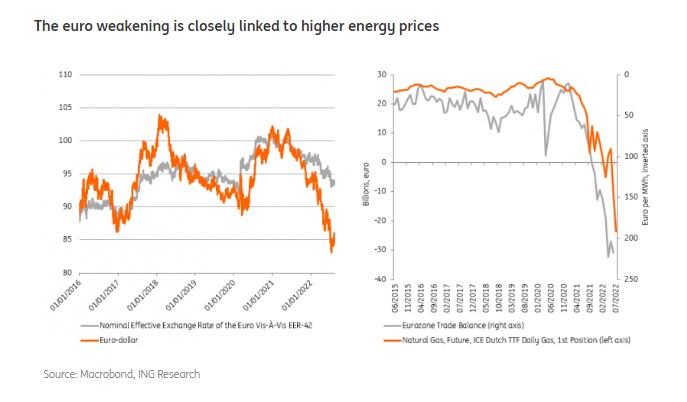 Competitiveness is improving, but businesses aren’t noticing it

Euro-dollar reached parity for the first time since 2002 – a milestone that is largely symbolic. However, the weakening of the euro, in general, deserves attention. The euro has been falling against the dollar since mid-2021, which seems to be largely related to diverging central bank expectations and a sudden decline in the eurozone’s trade balance. The latter is mainly related to the energy crisis, which has turned a solid trade surplus into a large trade deficit. The high energy prices paid in international markets have played an important role in the weakening of the currency.

Because the energy element is so important in the slide of the euro, the euro has weakened most significantly against the dollar. Against other important trade partners, the eurozone has seen its currency weaken less. While the euro has lost 16.2% vis-à-vis the US dollar since 1 January 2021, the trade-weighted exchange rate has only depreciated by 6.9%. The euro’s slide has resulted in a lot of imported inflation because we pay for global commodities in dollars. At the same time, gains in competitiveness have been modest. This is far from the best of both worlds.

The euro weakening is closely linked to higher energy prices

The competitiveness improvement does require a deeper look, though, as relative inflation between trade partners plays a role. Taking this into account, the real effective exchange rate (REER) for a country is considered to be a key indicator measuring competitiveness. This is an exchange rate which is weighted by local cost developments. In this case, we use unit labour costs. As chart 3 shows, the REER for the eurozone has been sliding, which boosts the competitive position of eurozone companies. This means that despite a limited drop in the nominal effective exchange rate, businesses do seem to be profiting from relatively better price competitiveness. So while the main impact of the weakening euro is definitely negative through higher imported inflation, there is at least some improvement in export competitiveness to be seen, which could cushion the recessionary effects in the domestic market. 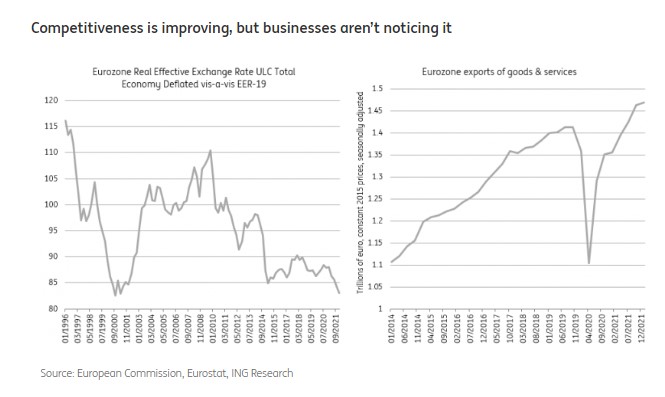 The problem is that businesses are far from feeling this though. The Economic Sentiment Indicator has a subindex which reveals how businesses perceive their competitiveness to have changed in their home markets and abroad. This indicates that competitiveness has dropped significantly within the EU and outside. While exports have recovered to the pre-pandemic trend in recent quarters, it looks like the weaker euro has not given an extra push. The question is whether this relates to price competitiveness or whether weakening global demand is causing this. Regardless, it does not look like businesses are profiting from the improved REER at this point, highlighting the fact that the eurozone is currently mainly feeling the burden from the weak euro and is reaping little benefit from it.

How has relative competitiveness within the eurozone evolved since the pandemic started?

When looking at the developments in the real effective exchange rate based on unit labour costs against other eurozone economies in recent years, we see interesting differences in performance. Germany, the Netherlands and Belgium have seen their competitiveness deteriorate, while Italy, France and Greece have seen strong improvements. Spanish competitiveness has been stable over recent years, while Portugal has experienced a sizable deterioration. The export powerhouses of the past decade have seen their competitive position slip a little compared to other eurozone countries. This is mainly due to stronger wage growth while productivity growth did not improve in tandem. Overall, this development is a small step towards making the monetary union more coherent and reducing the risk of a new euro crisis triggered by differences in competitiveness. 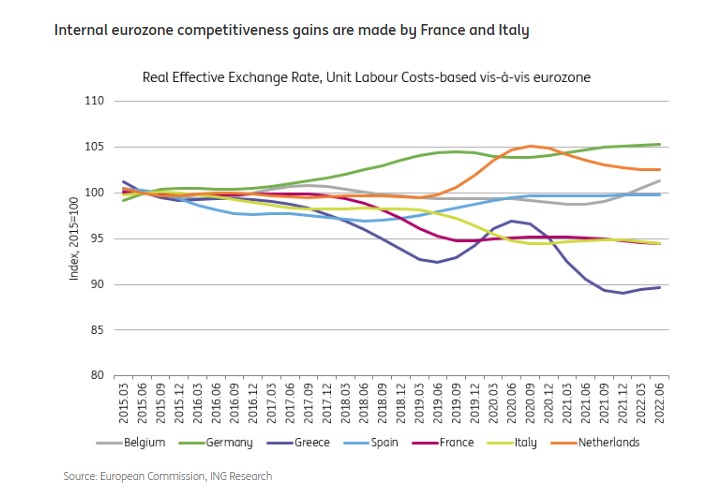 A shift in relative competitiveness had already started prior to the pandemic. However, some of the large moves at the start of the pandemic were likely related to how furlough schemes are included in the statistics and so are not necessarily an accurate reflection of underlying competitiveness developments. This seems to be the case for the Netherlands and Greece for example, but in the Dutch case, we still notice a break from the pre-pandemic trend as cost competitiveness ended up at a weaker level in the second quarter.

Since energy prices have become a dominant factor and labour cost competitiveness is muddied by government support, a look at a different measure of cost competitiveness is useful. Taking the GDP deflator, a broad price index across the economy, we see that a roughly similar picture emerges. Also here, the Netherlands and Germany have seen cost competitiveness deteriorate compared to other eurozone economies, while Italy and France have seen improvements. Compared to a broader basket of trade partners, the weaker euro dominates but still, we see that Germany and the Netherlands have experienced smaller gains compared to France and Italy.

Competitiveness gains have been modest and smallest in the north