Europe is increasingly being subject to ‘blank sailing’ as more shipping companies choose not to call at the region’s ports to focus on the more profitable Asia-to-North America route, a transport executive at Spain’s chemicals trade group FEIQUE said on Thursday.

Jesus Soriano, head of logistics at FEIQUE, said healthy demand in the US post-pandemic had caused a sharp increase in trade from Asia to the Americas while global supply chains woes increased, pushing up prices for maritime trade.

Blank sailing, also known as void sailing, is a term used when a shipping line or carrier decides to skip a particular port or an entire voyage of a scheduled sailing route.

Keeping that in mind, shipping companies decided to increasingly offer their freight services to those aiming to trade between Asia – the global manufacturing hub – to North America, the large global consumer of goods.

This has put pressure on many petrochemicals markets in Europe, which have had to endure higher freight rates as well as higher energy prices to run their plants.

“The Keynesian policies in the US during the pandemic – direct subsidies to consumers – caused demand for shipping to increase as demand for goods from Asia rose,” Soriano said.

“That healthy activity on the Asia-US shipping route caused shortages in other routes, and this is when blank sailing comes into place: many ships do not stop in Europe anymore.”

Regarding high shipping rates, which have more than quintupled in the past two years, Soriano said it is unlikely they would come down again.

A standard 40-feet container in the Asia-to-Europe shipping route cost before the pandemic around $1,700/container.

THE CHINA ENIGMA
Soriano made an interesting reflection about China’s position in global trade and its political system.

He said that with the available and likely limited data released by the Chinese government regarding trade flows, the rest of the world must play a guessing game over the state of the country’s economy.

“China is a dark box where we do not really know what is happening. There is a permanent uncertainty. China is not a country that can be treated like a normal democratic system, although in economic terms we tend to precisely do that,” said Soriano.

“Alas, it is not a normal country and every set of statistics coming out of China has to be taken with a pinch of salt.”

FEIQUE’s Soriano was speaking to the annual congress of Spain’s trade group for the paints and coatings sector Asefapi. 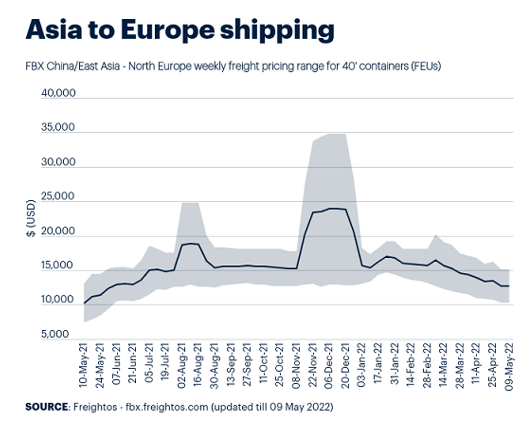