Europe pivots away from Russian gas: how will the global market rebalance?

The crisis sparked by Russia’s invasion of Ukraine has caused a massive shift in the global gas market. Change is happening at pace – and most of it will be irreversible.

Our latest Global gas strategic planning outlook provides a view of how the market will re-shape, exploring the risks and opportunities for market players. Contact us via the form on this page to find out more about the report, or read on for an overview of three key themes:

1. Europe – there is no coming back on Russian gas

The invasion has forced European businesses and governments to rethink Russia’s role as a key energy supplier. The EU is now firmly on the path of diversifying away from Russian gas, and it’s hard to conceive a change in this strategy – even if the war ends soon.

But timing remains a key uncertainty. Europe imported about 170 bcm of Russian gas in 2021 (140 bcm into the EU). We estimate it will import only 120 bcm this year, thanks to record LNG imports and lower domestic demand. However, further reductions would require terminating existing long-term contracts with take-or-pay closes, some of which (65 bcma) run until 2035. It’s unclear whether that will be legally possible. There is also the risk that Russia cuts supplies unilaterally, as they did for Poland and Bulgaria.

Our base case assumes that Russian contracts will remain in place until their end date. Yet, our view is still a major downgrade to the pre-war view – Russian supplies will reduce to 80 bcm by 2030, about 90 bcm lower than our previous expectations. Europe’s diversification will provide renewed momentum to reduce carbon emissions – more electrification, particularly of space heating, energy efficiency measures and faster ramp-up of green hydrogen result in our demand being 35 bcm lower by 2030 compared to the pre-war view.

However, domestic supply and close by import options, albeit attractive on paper, are limited. They might only be able to slow the reduction in legacy supply, including from Norway and Algeria.

As Europe tries to diversify away from Russian gas, LNG suppliers are set to be the biggest winners, particularly those from the US.

Project readiness, timing to market, competitive pricing and political ties, all point towards a second wave of US LNG. We anticipate more than 50 mmtpa will be sanctioned by the end of next year. And current contracting momentum shows the risk is firmly on the upside, particularly if European utilities will be committing to long term contracts. The recently signed Engie deal with 1.75 mmtpa for 15 years is a sign of more to come.

But much of this new LNG, including from projects that have taken FIDs in previous years, is likely to come only post-2026. LNG supply is expected to grow by 50 mmtpa in each of 2027 and 2028. In contrast, it will only average 13 mmtpa in the 2023 – 2026 period, limiting imports growth potential for both Europe and Asia.

3. Prices will come down from the recent highs, but will remain elevated through much of the decade

Europe will have to compete with Asia for the marginal LNG molecule to satisfy demand – just as it is right now. Prices will come down compared to current levels as and when the war in Ukraine eventually de-escalates, reducing the risk premium associated with Russian supply disruption. However, competition between Europe and Asia for limited LNG will be intense until a new supply wave arrives after 2026. Prices will inevitably remain elevated until then.

As markets rebalance in the second half of the decade, prices will soften. But our view features structurally higher prices than our pre-war view to accommodate an increased pull of global LNG supply to meet demand, particularly from the US. 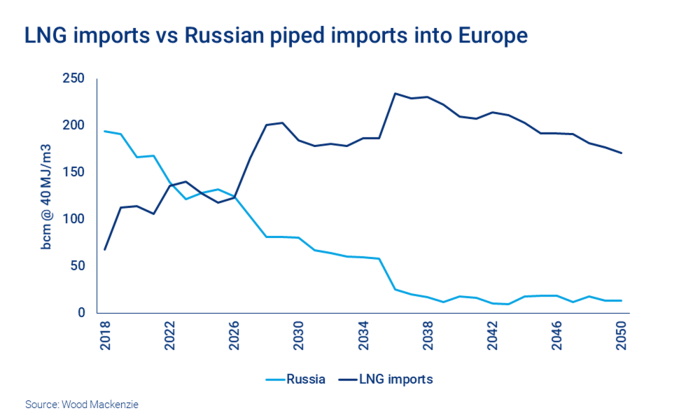 For a long time, Europe has been dubbed the “sink” of the global LNG market, absorbing excess LNG supply at times of insufficient demand growth from Asia. Those days are over. As Europe looks to diversify away from Russia, LNG is becoming the marginal supplier to Europe. And depending on how quickly it will wean itself off Russian gas, Europe could well remain the premium LNG market – until a new wave of LNG supply kicks in post-2026.

Take a closer look at the outlook for global gas

Our Global gas strategic planning outlook explores Europe’s diversification away from Russian gas and the opportunities and risks it presents – as well as what net zero goals mean for the long-term future of gas and LNG. To find out more about the report, contact us using the form at the top of the page.
Source: Wood Mackenzie

Back to the future? Cargo giant Cargill turns to sails to cut carbon