The 4.3 million mt/year capacity Hammerfest LNG facility, operated by Norway’s state-controlled Equinor, was shut in September 2020 after a fire at the plant.

The plant resumed exports in June and all but one of the cargoes supplied since have landed at ports across Europe as European hub prices continue to trade at a premium to other markets.

Since the restart of the Hammerfest LNG plant — the only large-scale LNG export facility in Europe — a total of 33 cargoes have been shipped, according to S&P Global data.

Only one was delivered outside of Europe, with a cargo supplied to Argentina in July. 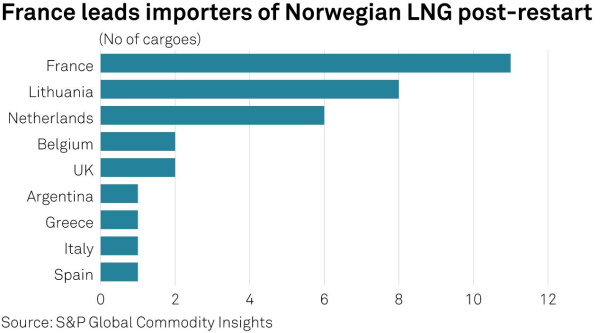 In the years before the fire, cargoes would regularly be shipped to non-European markets including Argentina, Brazil, China, India, and Japan, among others.

The biggest market for Norwegian LNG since June has been France, with a total of 11 cargoes supplied to its LNG import terminals at Dunkirk, Montoir and Fos Cavaou.

Eight cargoes were delivered to Lithuania and six to the Netherlands, followed by Belgium and the UK (two cargoes), and one each to Greece, Italy, and Spain.

Lithuania in particular was a key buyer of LNG from Norway before the fire — state company Ignitis has a ten-year supply deal with Equinor agreed in 2014.

As a result of the outage, Lithuania had to make alternative arrangements for LNG deliveries, with the vast majority of its cargoes delivered from the US.

Deliveries from the US into the Klaipeda terminal in Lithuania have also continued despite Norway resuming its exports and Lithuania taking six Norwegian cargoes.

According to S&P Global data, eight cargoes were supplied to Lithuania from the US terminals of Sabine Pass, Cameron, Corpus Christi, and Calcasieu Pass in the period June-November 2022.

Poland, however, has not resumed LNG imports from Norway despite being a regular buyer before the fire, the data showed.

Instead, it has mostly relied on spot LNG imports from the US and deliveries from Qatar under its long-term contract.
Source: Platts