Liquefied natural gas (LNG) import capacity in the European Union (EU) and the United Kingdom (UK) will expand by 34%, or 6.8 billion cubic feet per day (Bcf/d), by 2024 compared with 2021, according to the International Group of Liquefied Natural Gas Importers (GIIGNL) and trade press data. Expansions of import, or regasification, capacity will total 5.3 Bcf/d by the end of next year and grow further by an additional 1.5 Bcf/d by the end of 2024.

LNG regasification capacity in the EU-27 and the UK remained relatively stable and expanded modestly in the last 10 years, by 2.8 Bcf/d (16%), from 17.5 Bcf/d in 2012 to 20.2 Bcf/d at the end of 2021, according to data from GIIGNL. Since Russia’s full-scale invasion of Ukraine in February 2022 and the reduction in natural gas pipeline imports from Russia that followed, European countries have reactivated development of previously dormant regasification projects and have started development of new projects. 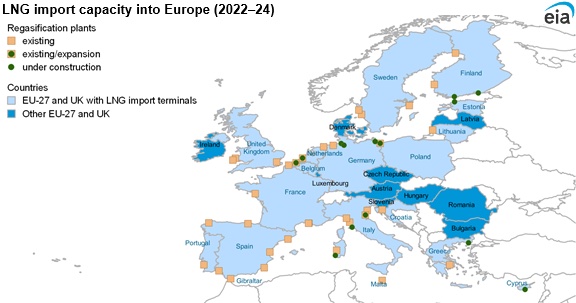 Data source: The International Group of Liquefied Natural Gas Importers (GIIGNL) and trade press
Note: Map displays existing and under construction LNG import capacity in the European Union and UK as of November 2022. Capacity under construction is expected to come online in 2023–24. LNG = liquefied natural gas.

So far this year, approximately 1.7 Bcf/d of the new and expanded LNG regasification capacity has been added in the Netherlands, Poland, Finland, Italy, and Germany. The new EemsEnergy terminal in the Netherlands (0.8 Bcf/d capacity) consists of two FSRU vessels and received its first import cargo in September 2022. A new FSRU terminal at Wilhelmshaven Port in Germany (0.7 Bcf/d capacity) has been completed in November 2022.

Regasification terminals currently under construction in seven EU countries could add an additional 3.5 Bcf/d of new capacity by the end of 2023:

Germany is developing three new FSRU terminals, which will cumulatively add 1.4 Bcf/d of regasification capacity at Lubmin, Brunsbuttel, and Wilhelmshaven. Two terminals (at Lubmin and Brunsbuttel) are expected to start operations this winter, and the second terminal at Wilhelmshaven is expected online in 2023.

Poland will expand capacity at the existing LNG regasification terminal at Świnoujście by 0.2 Bcf/d to reach a total capacity of 0.8 Bcf/d by December 2023.

France will add 0.4 Bcf/d of regasification capacity using an FSRU vessel called Cape Anne at Le Havre port, which is expected to come online in fall 2023.

Finland and Estonia are jointly developing an FSRU terminal in the Finnish port of Inkoo, which will add 0.5 Bcf/d capacity and is expected to come online this winter.

Italy is developing an FSRU terminal near the port of Piombino, which will add 0.5 Bcf/d of capacity and will likely come online in spring 2023.

Greece will bring online an FSRU vessel at Alexandroupolis port by the end of 2023, with 0.5 Bcf/d of regasification capacity.
Source: EIA