Government budgets were cautiously tightened for 2022

The war in Ukraine has been another game changer for fiscal policy. First, the pandemic led to unprecedented government support schemes and a more general rethinking of government investment going forward. Now, the war in Ukraine has led to a broad rethinking of European defence spending and yet another push for an even faster green transition and energy independence. Also, we expect more government support schemes in the coming weeks and months to offset the adverse effects from high energy prices for consumers but also corporates. To get a good handle of fiscal policy from here on, it’s important to look at where we were before the watershed moment for European government spending started.

The pandemic has caused debt levels to run up dramatically as the strong fiscal response and sharp GDP declines added to longer-term debt concerns. For 2022, many countries still run budget deficits larger than 3%, keeping policy accommodative. This is in line with the activated general escape clause in the Stability and Growth Pact, which allows countries to not adhere to the 3% rule to stave off the negative economic impact from unexpected adverse economic events, in this case the pandemic. 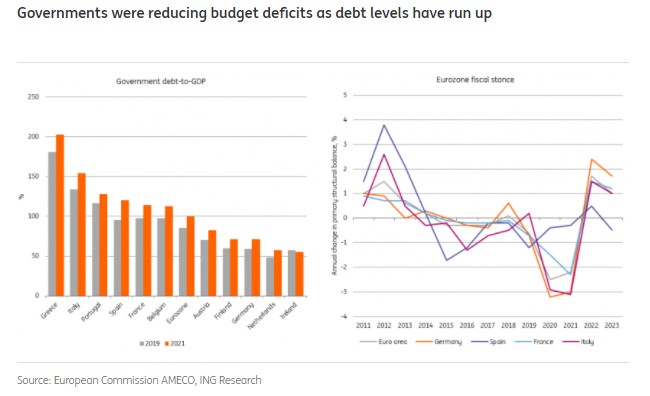 Despite the general escape clause, compared to the huge stimulus seen in 2021, the fiscal stance has tightened significantly in 2022. Pandemic support has largely faded from budgets, making the fiscal stance now about as tight as seen at the peak of the euro crisis. This is mainly cutting extraordinary spending though, which has to some degree been made redundant by an economy recovering more quickly than expected. For countries receiving sizable amounts from the EU recovery fund, this is counterbalanced by the significant inflows from the European Recovery Fund.

So at the national level, governments had started 2022 moving away from very expansionary policy towards normalisation as the pandemic had moved into a less impactful phase for the economy. The new geopolitical reality is now adding to fiscal spending needs though, likely reversing course for eurozone governments.

The war will change spending through three main channels

1. Defence spending is set to see a significant revival. Germany led the way when Chancellor Scholz announced a plan including 100bn euro from the 2022 budget for the military and to reach 2% of GDP in annual defence spending in the years to come. The latter is something that many eurozone countries fall short of and as most are NATO countries, they are therefore not fulfilling their commitment. The EU summit in Versailles agreed on substantially increased defence expenditure and investment. The chart below shows a rough calculation of what additional defence spending would mean for deficits, taking 2020 military spending data and matching them with 2022 government budgets. It shows that boosting military spending to 2% of GDP would lead eurozone budget deficits on average to surpass 4% of GDP as it is currently at just 1.5% of GDP; at least when all other expenditures remain unchanged. 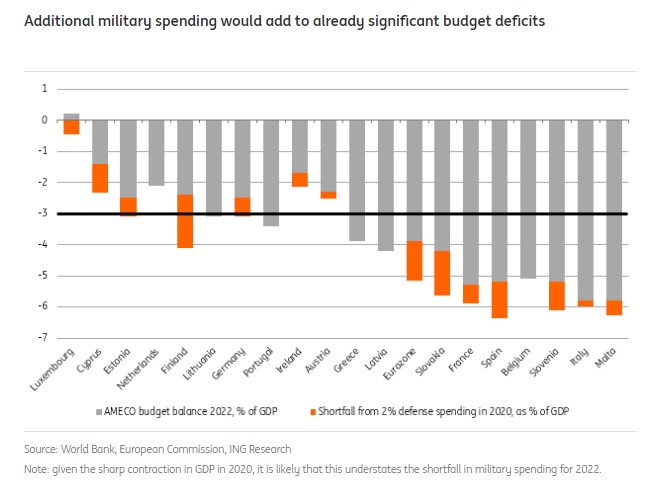 2. Energy dependency reduction is set to be a focal point of government policy in the short and medium term. The Commission’s REPowerEU plan is at the heart of this and has drafted the main pillars for government action, which we have addressed in more detail here. Short-term plans include shifts away from energy dependence from Russia, which is hard to achieve without increasing spending. Looking at the medium term, plans for the green transition are now going to be done sooner to help achieve energy independence goals. These plans include sizable investments in renewables, but also investing in gas and electricity infrastructure among others. It is hard to put numbers on these spending categories but it will be significant. Think of Europe’s weak bargaining position with new suppliers and the need to increase and speed up investments in times of labour shortages and commodity price inflation.

3. Fiscal support for households is being ramped up to counter the negative purchasing power effects of higher energy prices. This already happened at the end of last year to a modest degree when natural gas prices first spiked, but the current situation is causing governments to add new rounds of stimulus. The impact of this is far more modest than pandemic support obviously and is set to remain much smaller also in case of prolonged high energy prices. In case the economic fallout turns out to be larger than currently expected, automatic stabilizers will also cause spending to be up. Also, high energy prices will not only affect households but will also undermine European companies’ competitiveness, up to production disruptions. As a consequence, we wouldn’t exclude eurozone governments to decide on support schemes for companies in the coming months about which the European Commission has already confirmed that EU state aid rules will not hinder this.

All in all, this means that while fiscal spending for 2020 and 2021 was characterized by extraordinary fiscal stimulus to battle the negative impact on the economy from the pandemic, we are now facing a crisis that is set to result in more spending for the short and medium term on energy dependency and defence. There is some overlap in the EU recovery and resilience facility, through which substantial green transition investments have been agreed. Still, the specific focus on urgent energy independence makes the green transition plans helpful but not enough when looking at EU plans.

Is there room for more spending or will this come with budget cuts?

As said before, there is limited space to absorb the extra spending without either debt running up, spending cuts or increased taxation. With debt levels already high and deficits on average still above 3% of GDP in the eurozone, governments have limited space.

The general escape clause from the Stability and Growth Pact (SGP) remains in place for 2022, meaning that governments do not need to adhere to the fiscal rules for now. No country will be put in the so-called Excessive Deficit Procedure for running fiscal deficits higher than 3% of GDP, debt ratios of more than 60% of GDP or for the lack of reducing the debt ratios. For next year, the question is whether the escape clause will still be effective, something which will only be assessed with the next European Commission macro-economic forecasts, to be released in May. At that time, more clarity about the economic impact of the war should help gauge whether the general escape clause should remain in place in 2023.

Fiscal policy will remain accommodative in the years ahead but not splurgingly accommodative. The age of austerity is over, but prudence is not out the door. We expect some rebalancing of government spending to happen, but not actually leading to tightened policy stances in the medium-term. And how accommodative fiscal policy can then become depends on whether defence and energy independence spending is funded centrally or not, whether there will be substantial SGP reform and whether the ECB continues to be an important player in the bond market.

Our best guess at this point is that a SURE type lending programme will be introduced. This fudge allows governments to structurally invest at low rates. The fact that this does add to national debt continues to force governments to reform and remain prudent in other spending. This still demands significant SGP reform, but with low interest rates locked in, EU leaders can afford to kick the can down the road with that issue for some time to come.
Source: ING