Nippon Steel & Sumitomo Metal Corporation (NSSMC) has agreed to a strategic partnership for the supply of Oil Country Tubular Goods (OCTG) with Sumitomo Corporation and BP Exploration (Epsilon) Limited of Oman (BP Oman) which is under the umbrella of BP p.l.c. of London. The ceremony was held in Oman on July 25th, 2018.

The ceremony was attended by Mr. Yousef Al Ojaili (President of BP Oman) and others. As a representative for NSSMC, Mr. Morioki (General Manager, Head of Dubai office) attended. 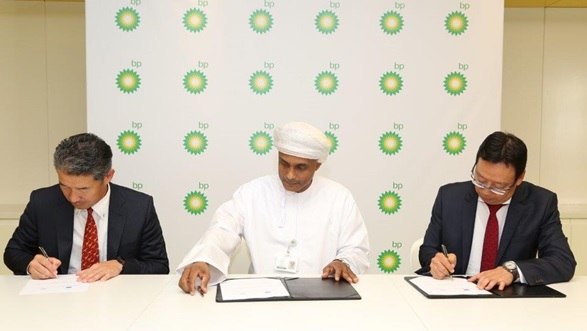 * The Khazzan tight gas field is one of highlighted projects within the BP Group, aimed for exploration, located in the Block 61 in the Ad Dhahirah Governorate of Oman. Exploration has resulted in a doubling of the gas production volume from the level of the initial plan. Additional investment has also been decided to further boost production volume.
Source: Nippon Steel

2020-08-05
hellenicshippingnews..
Previous: Russian refineries may keep lower runs in August
Next: China only fulfils 5% of Sino-U.S. energy trade deal in first half of 2020