While shipping is a carbon efficient mode of transportation, concerns have been raised about the greenhouse gas emissions associated with the industry. The industry combusts regularly close to 8% of oil produced annually and in 2012 made up 2.4% of global emissions.

These emissions are mainly a result of the bunker (fuel) used to propel the vessels. As such, the International Maritime Organization (IMO) is playing an increasingly important role of regulating the greenhouse gas emissions from the industry. Some emission reduction targets include:

From the vessel operation side, revenue is generated by transporting cargo within the allotted time schedule. The major contributor to operating costs is bunkers, which typically makes up 50-80 % of a vessel’s operating costs. Using the Maritime Optima route estimator and simple back-of-the-envelope bunker calculations, we can illustrate the bunker costs for performing a voyage given VLSFO and IFO380 prices in Singapore 2021-06-22. 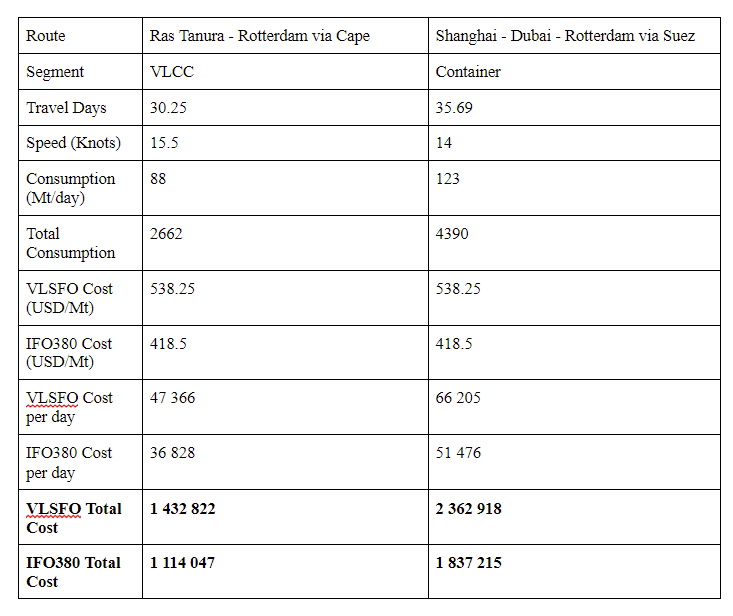 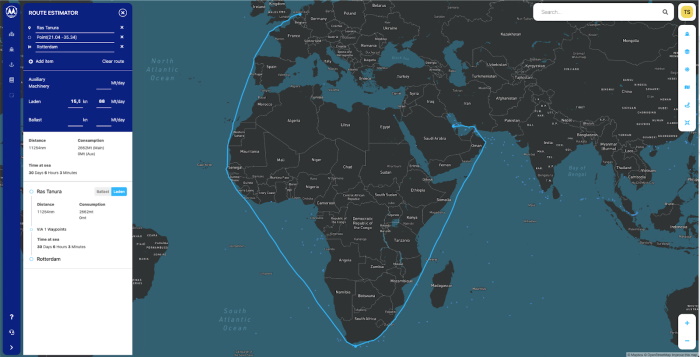 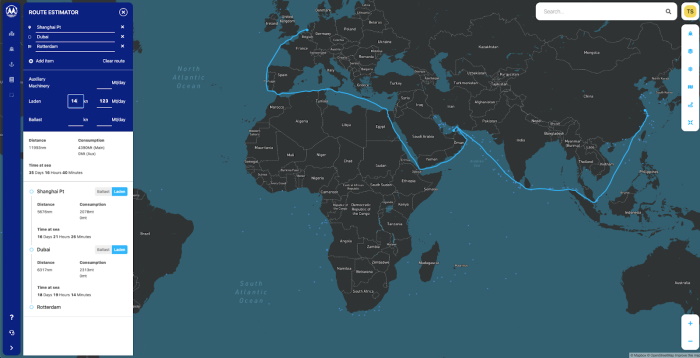 Therefore, operators always want to minimize fuel spending both in short and long term, given the constraint of transporting their cargo on time.

In a short-term perspective, bunker costs will be controlled by the tuning of the speed and consumption, negotiate favourable bunker clauses in the charterparties, bunker hedging or trying to optimise bunker purchase and volumes. Operators have so far not addressed the timing of purchase as a means to reduce bunker costs. However, access to reliable real-time bunker trading data from many ports simultaneously might make timing of bunker procurement more interesting as a variable to be optimized.

In a longer-term perspective new technology and software, new engine types and new types of fuel will be evaluated.

Oil markets have been seen as something close to perfect competition, impenetrable and prone to exogenous shocks, political, economic or other. In order to address the timing issue accurate prices are necessary. However, an accurate view of prices is not entirely easy to obtain due to the nature of how bunkers are sold and purchased. The most obvious point is that physical bunkers are not traded on an exchange, but locally in ports. It follows that the liquidity of transactions is less than desired and outside of the main hubs, such as Rotterdam and Singapore, price fluctuations in bunkers compared to oil prices can be substantial at times. Price variations for the different products can also be affected differently due to local supply and demand. Though it is important to note that the link to oil prices is invariably present through time.

A prerequisite for such predictions would be transparent historical bunker prices for the multitude of different ports providing bunker to vessels. Further, due to the increasing regulatory restrictions on particle emissions such as NOx, COx and CO2 in ports, vessel operators also need access to accurate price information for the different grades of bunker fuel such as IFO180, IFO380, MGO, ULSFO, and VLSFO.

To this end, Bunkerex Ltd. provides prices based on real stems adjusted for volume, availability, and credit. This is why we at Maritime Optima AS are proud to have partnered with BunkerEx. Their bunker price information enriches our product and forms the baseline for further data driven price predictions which will be implemented in our product.

After loading the BunkerEx data into a Pandas DataFrame, this is what the data will look like. 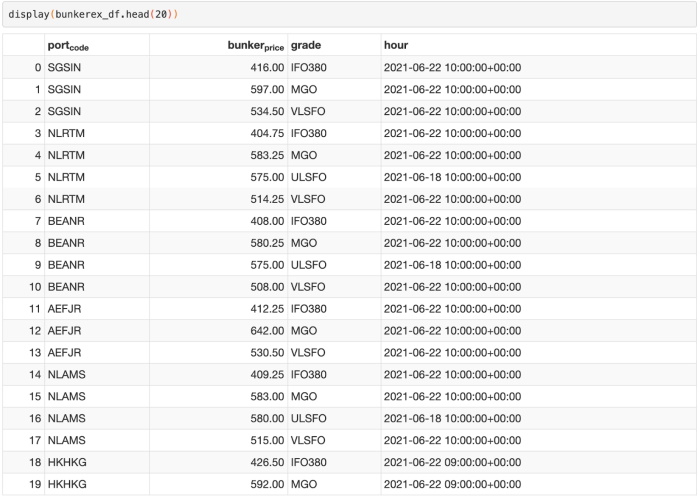 In order to further analyze the bunker price data, our main aim will be to create index prices. These prices will be aggregated on an hourly basis, and will serve to identify trends among the different ports and grades. To adjust for structural price variances, only data for the previous 6 months will be used in our analysis.

As bunker prices are not reported for port and grade on an hourly basis, missing values will have to be imputed. To visualize the number of missing values, we can utilize the excellent packagemissingno. We will use MGO bunker prices in the port of Singapore for our example analysis in this blog post. 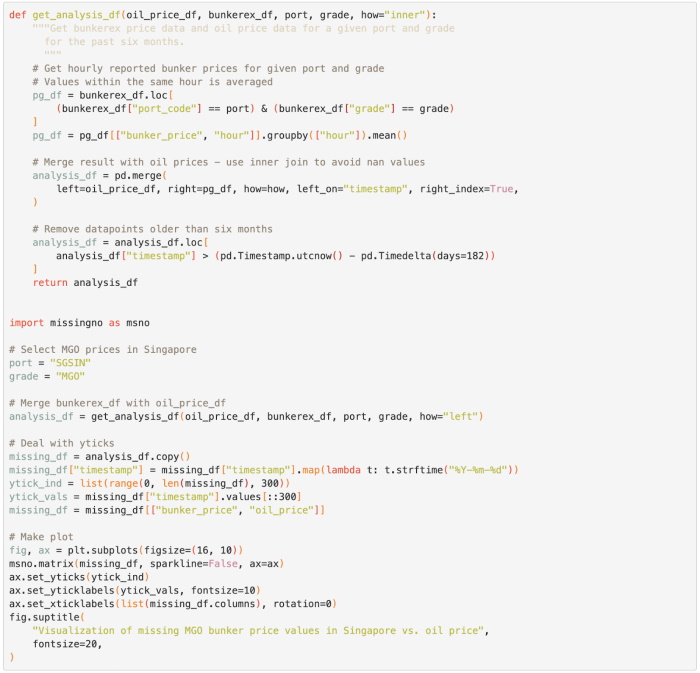 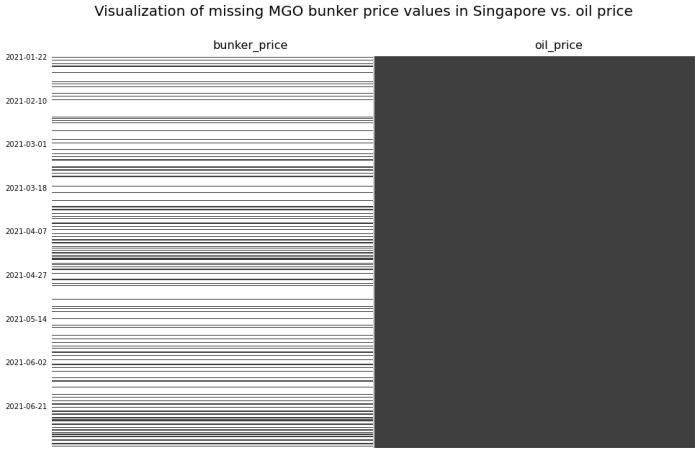 Rather than using a simple moving average or forward fill, we will take advantage of the highly correlated oil price to impute the missing values. Creating a scatter plot of oil prices and MGO bunker prices in the port of Singapore yields the following plot. The Pearson correlation coefficient is also provided. 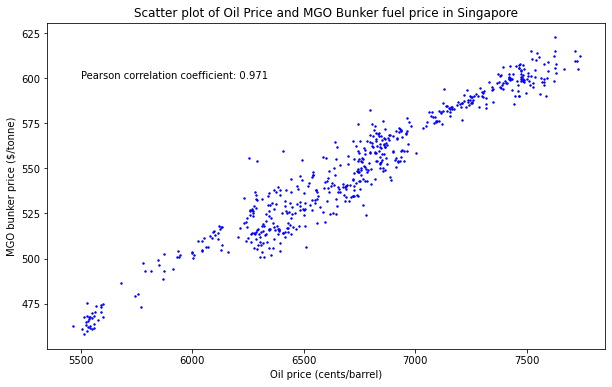 Given this information, we can utilize a simple linear regression model to estimate the missing bunker prices from above. More formally, given the data pairs and we want to find estimates for that minimizes the error in the relationship

The best fit weights and will be the values that minimizes the least square minimization problem:

This approach relies on several strong assumptions such as linearity, constant variance, and independence of errors. The best fit of simple linear regression may be affected when the underlying assumptions are broken. In particular, least squares estimates for linear regression models are highly sensitive to outliers. As the assumptions regarding independence of errors are not likely to hold for bunker prices of different grades and in different ports. Ordinary least squares estimates are likely to yield poor imputation estimates.

Luckily, approaches such as robust regression are available, which aim to not be overly affected by violations of assumptions by the underlying data-generating process. One such approach is a robust hybrid of lasso and ridge regression called the Huber regression.

Ridge regression minimizes the loss function given by

which extends the squared error loss function by introducing a penalty on the size of the weights with being a complexity parameter controlling the amount of shrinkage.

Huber regression, further extends ridge regression by making use of the Huber loss and thus aims to minimize the loss function given by

Huber regression differs from ridge regression in the way that it applies a linear loss to samples that are classified as outliers. A sample is classified as an inlier if the absolute error of the sample is less than some threshold. Errors smaller than get squared while larger errors increase the criterion only linearly. Huber recommends an value of 1.35 as it retains 95% statistical efficiency for normally distributed data.

After having fitted the data, let us plot the inlier, outliers and the best fit curve. 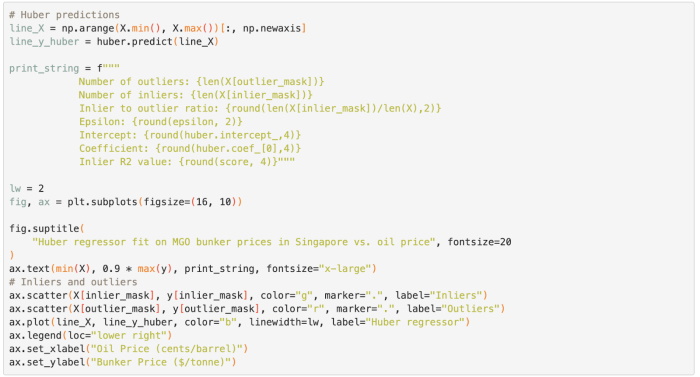 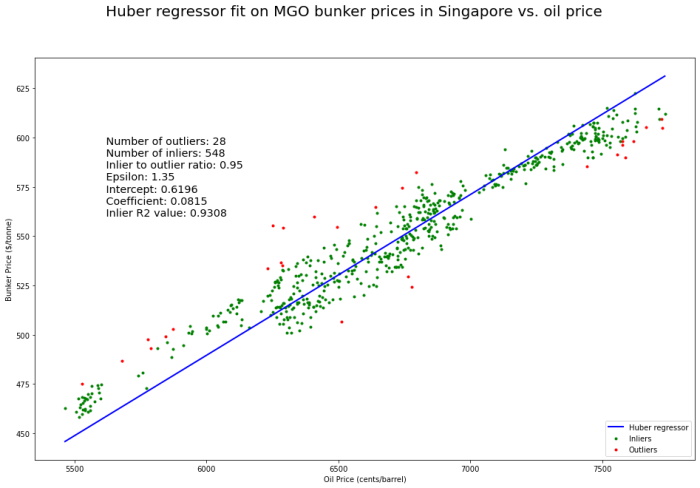 Finally, we can plot the original Bunkerex MGO bunker prices in Singapore along with the outlier decision boundary and Huber estimates. 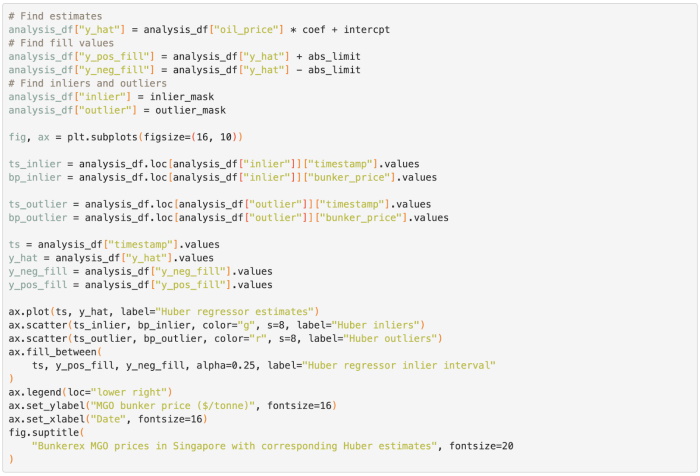 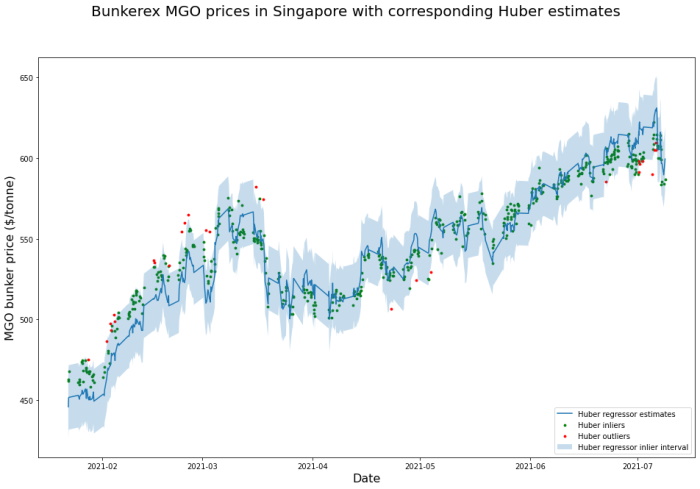 BunkerEx provides transparent historical bunker prices for many different ports and grades. In order to provide meaningful bunker price predictions in the future, it is helpful to estimate historical prices. In this blog post we have seen how one can make use of robust regressors to estimate hourly bunker index prices. This will be a helpful starting point for future work with bunker optimizing along a route, bunker forecasting and pre calculation
Source: Maritime Optima