Geopolitical tensions between the US and Iran continued to send shockwaves through the commodity markets Monday, with oil prices breaking above the key $70/b level and gold and precious metals surging to multi-year highs as their role as safe havens comes to the fore.

While there are heightened risks of retaliatory attacks around oil facilities in Saudi Arabia’sEastern Province, the uncertainty around how and when Iran will likely retaliate as threatened and where the conflict will go is spread across oil and other commodities, including LNG. 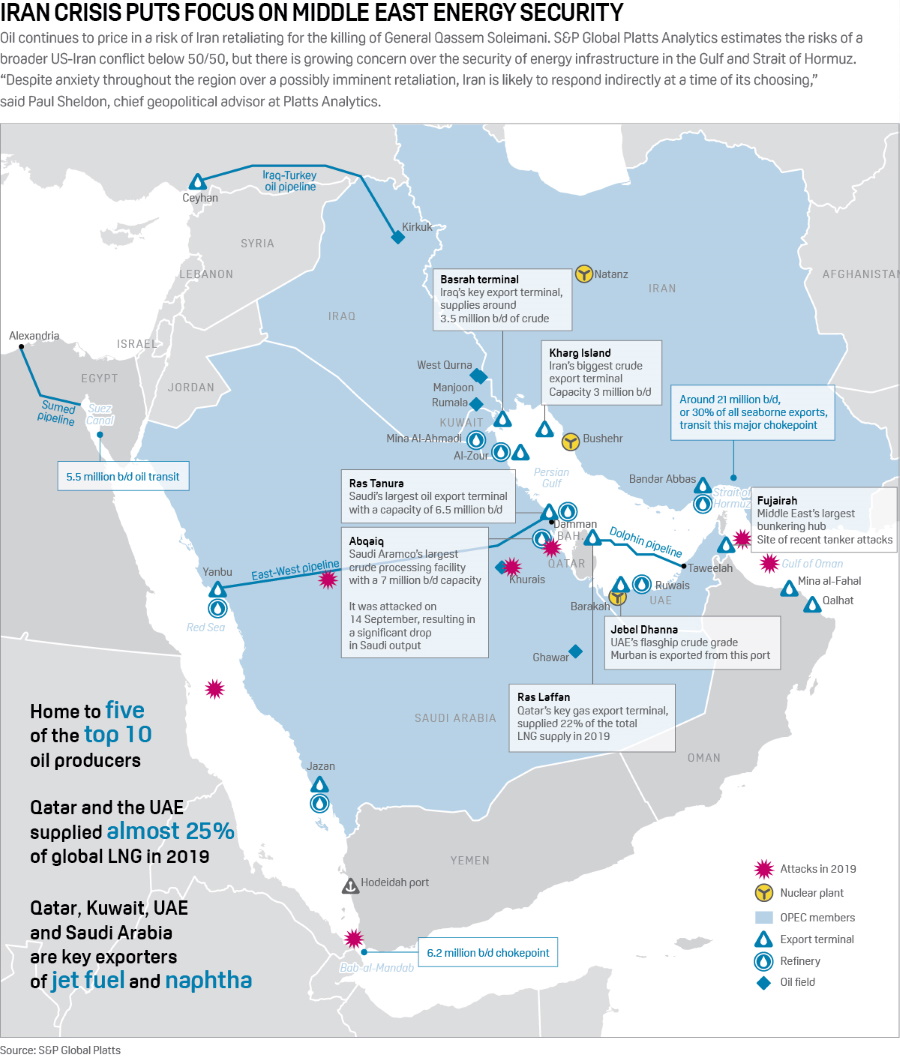 “Barring massive interruptions of oil supply from the aftermath of the US airstrike last Friday, Brent prices are likely to stay elevated but is unlikely to be above $70/b on a sustainable basis or for too long. We continue to believe see chances of a full-scale conflict in the Middle Eastleading to massive interruptions of oil supply as below 50/50 though things may change,” S&P Global Platts Analytics said.

S&P Global Ratings said its base-case assumption that any military action by either side would not lead to a fully-fledged direct military confrontation.

“We continue to believe that any escalation will remain contained given that a direct conflict would be economically, socially, and politically destabilizing for the entire region, including US-Gulf allies,” S&P Global Ratings said in a note.

“[But] if a protracted and wider conflict emerges, assuming export routes remain functional, the fiscal benefit of potentially higher oil prices for Gulf sovereigns will likely be offset by the adverse effect on capital outflows and weaker economic growth.”
PRICES

** Front-month Brent briefly broke above $70/b in early European trade Monday to hit $71.75/b, up $2.15 from Friday’s settle, The benchmark futures contract rose 3.5% on Friday in the initial market reaction to the US attack, the highest since September 16, 2019, the first trading day after attacks on Saudi Arabia’s pivotal Abqaiq processing facility and Khurais oil field. That attack caused the benchmark contact surge over $10 to $71.95/b.

** The immediate spot LNG price reaction from the killing of Soleimani has been muted. The S&P Global Platts JKM price assessment for February was assessed at $5.35/MMBtu on Monday, up only slightly from Friday’s $5.26/MMBtu.

** Gold has jumped on safe-haven demand, pricing near a seven-year high at around $1,575/oz.

** The rest of the precious complex pulled higher; palladium broke above $2,000/oz.

** Spot VLCC freight rates for shipping crude from the Persian Gulf to the Far East were littlechanged at Worldscale 121 Friday as Asian markets continued to assess the potential impact of the USattacks on the cost of shipping.

** Rising natural gas prices Friday fed through to European coal and carbon prices as the market factored in the possibility of rising coal-fired power generation.

** EU Allowance futures for December 2020 delivery rose 2.4% to Eur24.98/mt Friday, but the gains were shorter-lived, the contract falling back Monday to a low of Eur24.49/mt as bearish demand reasserted itself.
TRADE FLOWS
Oil

** Asia’s rigorous efforts to diversify crude supply sources beyond the Middle Eastern market over the past few years, in conjunction with sufficient oil reserves, would help insulate regional refiners against any potential reduction in the Persian Gulf term supply.

** Despite the reports of oil field staff withdrawals in Iraq over concern of retaliation from Iranian backed militants, all upstream operations and exports in Iraq are continuing normally, according to local sources.

** Iran’s oil exports are already hurting from US sanctions, which have caused its production fall to the lowest in over three decades. Iran produced an average of 2.43 million b/d last year from3.57 million b/d and 3.79 million b/d in 2018 and 2017, respectively, according to S&P Global Plattsestimates.

** Saudi Arabia, which is currently producing at 9.75 million b/d, has 1.5 million b/d of sparecapacity. History has yet to test whether Saudi output above 10.5 million b/d can be sustained for longer than a couple of months. S&P Global Platts Analytics estimates global spare capacity at 2.3 million b/d.
Gas, metals, and shipping

** Qatar and the UAE — both of which export LNG via the key Strait of Hormuz shipping channel — supplied an estimated 81 million mt of LNG to world markets in 2019, according to S&P Global Platts Analytics data.

** Any disruption to Qatar’s mainstay LNG exports would likely have a major impact on the global gas market, despite the current glut.

** Shipping companies, including owners and operators of tankers and LNG carriers, are on high alert following escalated tensions in the Middle East, with risks of freight rates rising sharply, higher war insurance premiums and other risk mitigation efforts being implemented.

** Singapore-based shipbrokers said risk management teams have been in meetings since the attacks took place and owners and charterers are concerned as the situation is much more serious thanthe tanker attacks of 2019.
INFRASTRUCTURE
Oil

** Upstream workers at international oil and services companies began evacuating some US staff Friday from Iraq on concerns of retaliation by Iraqi-based Iran-backed militants, according to local sources.

** Iraq’s Oil Ministry said that its oil fields were operating normally and that no other nationalities were departing the country.

** In addition to potential attacks on Iraqi oil fields operated by Western oil majors such as BP, ExxonMobil, Chevron, and Eni, the focus of potential retaliation is on the Middle East’s two key shipping waterways; the Bab-el-Mandeb Strait at the southern tip of the Red Sea and through the Strait of Hormuz.

** US producers are unlikely to boost spending and drilling despite the recent price rise, with2020 capital budgets projected to drop 7% to 10%.

** Fujairah is among the world’s top bunkering hubs and lies outside the Strait of Hormuz. Bunker sales volumes at the Port of Fujairah were about 1.9 million mt in the first quarter last year, before dipping on geopolitical tensions that began last summer with tanker disputes in the region. As an integrated hub, Fujairah is seeking to be more than just a bunkering and oil storage center but also a place where companies trade products.
Strait of Hormuz

** The UK is beefing up security around the Strait of Hormuz, the key chokepoint for oil and gas ships traversing the Persian Gulf. Iran had in the past threatened to close the waterway in case of war in the region.

** The Strait of Hormuz is the world’s most important oil chokepoint because of the large volumes of oil that flow through it. In 2018, its daily oil flow averaged 21 million b/d, or the equivalent of about 21% of global petroleum liquids consumption, according to the US Energy Information Agency.

** The US Fifth Fleet is responsible for about 2.5 million square miles of area including the Arabian Gulf, Gulf of Oman, North Arabian Sea, Gulf of Aden, and the Red Sea, according to its website. The policed area spans 20 countries and includes three critical choke points at the Strait of Hormuz, the Suez Canal and the Strait of Bab-el-Mandeb at the southern tip of Yemen.

** A number of tanker incidents in the Middle East buffeted oil prices last year. The UK-flagged Stena Impero, which had been detained by Iran for over two months after being seized in the Persian Gulf, was released in September.

** Ship operators in the Middle East have been on high alert, and insurance rates jumped after tanker attacks in the Gulf of Oman in May and June last year. The US has blamed Iran for previous attacks, although Iran has denied responsibility.
Red Sea

** Most exports of petroleum and natural gas from the Persian Gulf that transit the Suez Canal,or the SUMED pipeline, pass through both the Bab-el-Mandeb and the Strait of Hormuz.

** In 2018, an estimated 6.2 million b/d of crude oil, condensate, and refined petroleum products flowed through the Bab-el-Mandeb Strait toward Europe, the US, and Asia, according to the EIA.
Source: Platts