Miners are seeking to take advantage of a jump in the prices of many rare earth elements, needed for permanent magnets used in low-carbon technologies as well as myriad other applications such as weapons systems.

The rally has been driven by surging demand for electric vehicles as well as concerns that Beijing may restrict sales.

Below are some rare earth projects being developed around the world outside China, which accounts for about 90% of output, as Western nations seek to diversify supply. 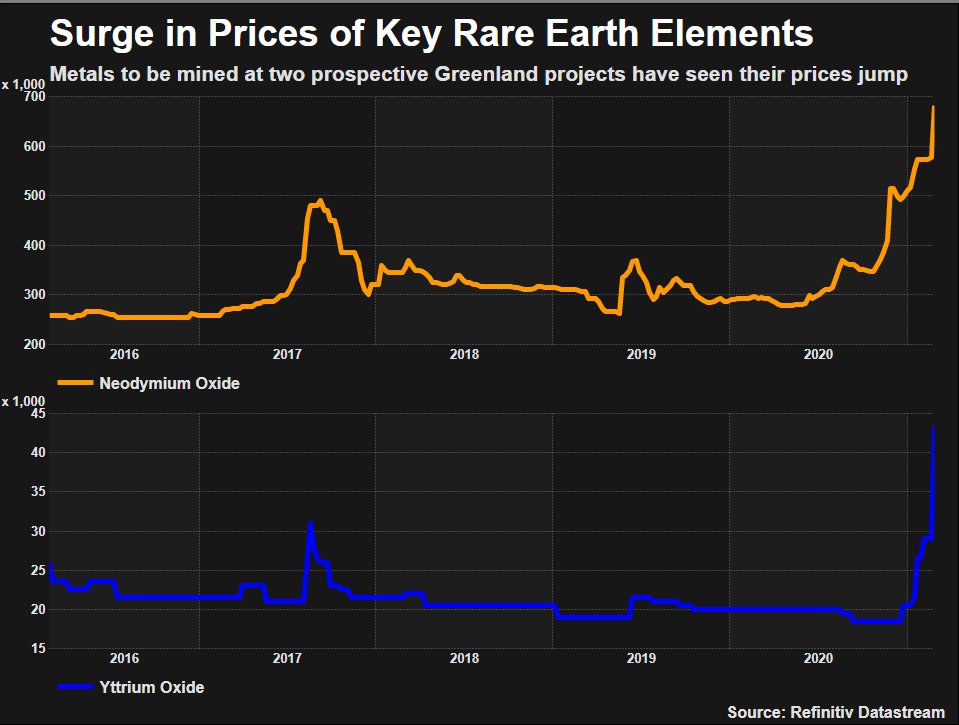 Norra Karr – Leading Edge Materials Corp is seeking government approval for a mine that it says will have a 20-year life, producing 5,000 tonnes a year of rare earth oxides. Key metals are dysprosium, used in magnets, and terbium, for computer monitors.

Nolans – Arafura Resources is seeking funding to build a A$1.03 billion mine with a 33-year life. Aiming for 7,540 tonnes a year of cerium oxide and 3,920 tonnes of neodymium-praseodymium oxide.

Browns Range – Northern Minerals has a pilot plant producing dysprosium to assess feasibility of commercial development of a mine.

Lofdal – Namibia Critical Minerals has a joint venture with state-run Japan Oil, Gas and Metals National Corp to develop a mine from a deposit rich in yttrium and also with dysprosium and terbium. It has applied for a mining licence.

Longonjo – Pensana expects to start construction this year on a mine to produce 4,500 tonnes a year of neodymium-praseodymium oxides. It also plans to build a separation processing plant in the UK.

Ngualla – Peak Resources has environmetal approvals in place and has applied for a special mining licence to build a $365 million mine with a life of 26 years. It is targeting 2,810 tonnes a year of neodymium-praseodymium oxides.

Steenkampskraal – a privately held company, says it plans to raise finance this year to restart an underground mine that previously produced thorium. It aims to launch in 2022, producing 2,700 tonnes per year of rare earth oxides, particularly neodymium.

Elk Creek – NioCorp Developments Ltd is seeking financing to build a mine in Nebraska with a 36-year life that will primarily produce niobium, used in jet engines and rockets.

Bokan Mountain – UCore Rare Metals Inc is developing a mine in Alaska, part of an Alaska Strategic Metals Complex, which is due to launch in 2023.

Round Top – Texas Mineral Resources Corp and privately held USA Rare Earth usare.com are developing the project in the western corner of Texas and hope to have it operational by 2023.

Strange Lake – Privately-held Torngat Metals plans to begin production in 2023 from a mine with a 25-year life, and build a separation plant in Canada with output of 11,000 tonnes a year of rare earth oxides. Its main metal is dysprosium.

Nechalacho – Vital Metals plans to launch production this year from a starter pit and plans to ramp up to output of 5,000 tonnes of contained rare earth oxides by 2025.
Source: Reuters (Reporting by Eric Onstad in London, additional reporting by Ernest Scheyder in Houston)