Global prices of refined sugar in the London No. 5 front month futures contract have fallen by around 8% to $304.40/mt since the start of the year, further dampening support for Thai cash premiums. Thai 45i cash premiums in containers for prompt shipment are hovering around $12/mt, down from a year-to-date high of $20/mt on April 15. 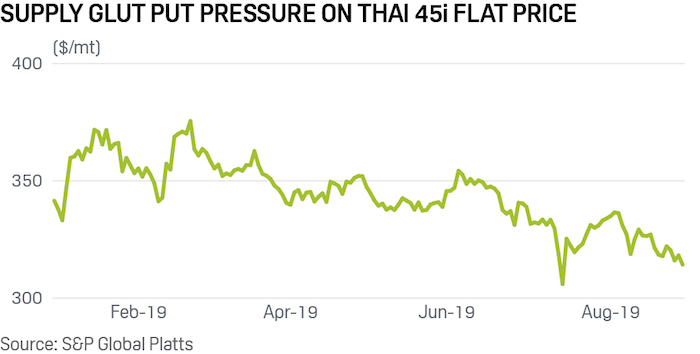 China’s increasing enforcement of stricter controls over the cross-border movement of sugar from Taiwan, Myanmar and Cambodia has had the flow-on effect of weakening demand for Thai sugar, as it reduces purchases for Thai sugar for re-shipment.

Major buyers of Thai sugar Myanmar and Cambodia posted a huge drop in refined sugar imports to 120,046 mt and 284,387 mt respectively over January-June, down 66% and 32% year on year, according to Thai Sugar Millers Corporation orTSTC data. 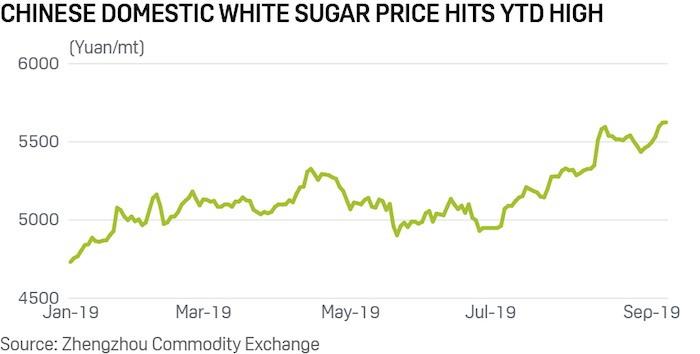 Cross-border flows of sugar into China have been reduced as customs authorities clamp down on customs evasion.

The major cross-border flow of Thai refined sugar takes place in international waters between Taiwan and China, while the flow from Myanmar and Cambodia is smaller scale and via truck.

Earlier this year, Chinese customs seized a few vessels containing bulk refined sugar that were slated to be heading to Taiwan but were accused of being destined to China without necessary customs clearance, market sources said.

Market sources have said that Thai sugar vessels have been known to dock at bonded warehouses in Taiwan and have their cargo shipped to China aboard other vessels, or repackaged into bags and loaded onto barges for transfer to other vessels in international waters.

“In the past, we could see 10 cargoes moving towards Taiwan every quarter, but now probably it is only two to three,” one trader familiar with the matter told Platts.

DOMESTIC CHINA PRICES FIRM
Domestic refined sugar prices in China are expected to remain firm on the back of the stricter control of cross-border flows into the country, trade sources said.

Moreover, domestic mills in China’s major sugar producing regions such as Guangxi and Yunnan are grappling with low inventories this year due to dry weather and a destructive armyworm reducing cane production.

Several trade sources noted that the higher domestic price has triggered optimism that China might step up import buying.

The current lack of buying interest from destination buyers was reflected in the London No. 5 August expiry price hitting the lowest year-to-date close for the contract at $295/mt on July 16, with a large delivery of 793,530 mt of Thai-origin.

Market participants said receivers were expected to face difficulty finding homes for such a large volume, which sent a bearish signal to the Thai refined sugar market.

Thai sugar mills were also heard reducing their stocks of old crop by encouraging trading houses to nominate vessels for shipment to destination markets rather than carrying over the sugar to the end of the year. 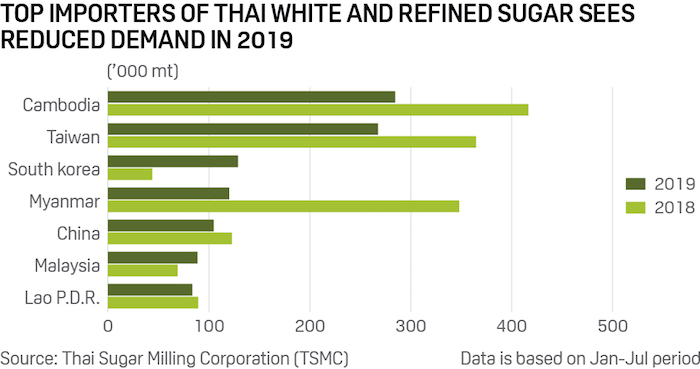 Several trade houses with warehouse facilities outside of Asia have begun to move Thai white and refined sugar over July-September, with shipment data showing Thai sugar cargoes moving towards the Middle East and Africa.

“Most of the cargoes moving to Africa are to be stored temporarily while waiting for opportunities to sell,” a Singapore-based trader said.

As such, the flow to Africa was not necessarily to an end-user market, but rather to simply take advantage of the cheaper storage.

COMPETITION COULD EMERGE FROM INDIA
Trade flows for Indian low quality white or LQW has slowed in recent months as most Indian refineries have exhausted their export quota allocations for the 2018-19 marketing year.

However, Indian mills could soon be under pressure to sell excess sugar given the large ending stocks in the 2018-19 season and clear cane arrears owned to farmers, and possibly cut prices to be more competitive in the international market, trade sources said.

“Thai-origin sugar is always the first priority for Chinese buyers due to the quality — but who knows, we might see Chinese buyers coming to buy Indian LQW if the price works out,” a market analyst said.
Source: Platts