50bp in May with a QT start

Fed Governor Lael Brainard’s comments on Tuesday gave us fair warning for what to expect in the minutes to the March FOMC meeting that have just been released. Brainard, who continues to await confirmation as vice chair of the Federal Reserve, is often viewed as being on the more dovish wing of FOMC members. For her to endorse “a series of interest rate increases” plus the promise to “reduce the balance sheet at a rapid pace as soon as our May meeting” underscores the Fed’s desire to “catch up” to regain control of inflation and inflation expectations.

In the end though the FOMC minutes don’t appear to go any further than what Lael Brainard outlined. They show one or more 50bp rate hikes “could be appropriate” at upcoming meetings (“many” would likely have voted 50bp in March had it not been for the Russian invasion of Ukraine). Note many in the market (ourselves included) expect three consecutive 50bp hikes from the Federal Reserve. 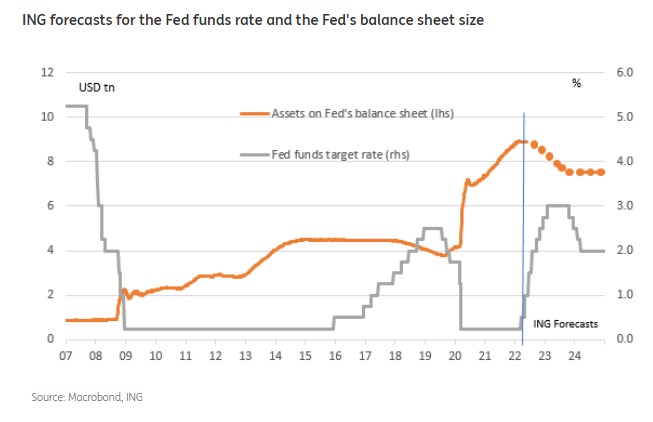 QT to be ratcheted up to $95bn/month by September

With regards to the Fed’s $9tn balance sheet, the minutes showed “all participants” felt the need to announce the “commencement of balance sheet runoff at a coming meeting”. Given the doubling of the size of the balance sheet since the last round of Quantitative Tightening in 2017-19, this would be done at a “faster pace” than then. “Participants generally agreed that monthly caps of about $60 billion for Treasury securities and about $35 billion for agency MBS would likely be appropriate” versus the peak total $50bn run-off seen last time around. This would be a “phased in” roll off cap of maturing assets that could last 3+months depending on market conditions. In months where there isn’t enough Treasuries or MBS maturing, Treasury bills could be redeemed to make up for any shortfall.

This looks set to be formally announced at the next FOMC meeting, as outlined by Brainard – “participants agreed they had made substantial progress on the plan and that the Committee was well placed to begin the process of reducing the size of the balance sheet as early as after the conclusion of its upcoming meeting in May.” We expect it to be initially announced as perhaps $30bn for May with regular increases until $95bn per month is hit in September.

Given the large market reaction to Brainard’s comments yesterday and her perceived “dovishness” within the FOMC, the minutes are likely to be a little comforting in that we haven’t seen a ratcheting up of the hawkishness.

In terms of how it ties in with our forecasts, given the shift in official commentary and with inflation pressures visible throughout the economy, we believe the Fed will deliver half-point interest rate increases at the May, June and July policy meetings. With QT doing some of the policy tightening, we expect the Fed to revert back to 25bp hikes from September onwards. We look for the Fed funds ceiling rate to get to 3% in early 2023. 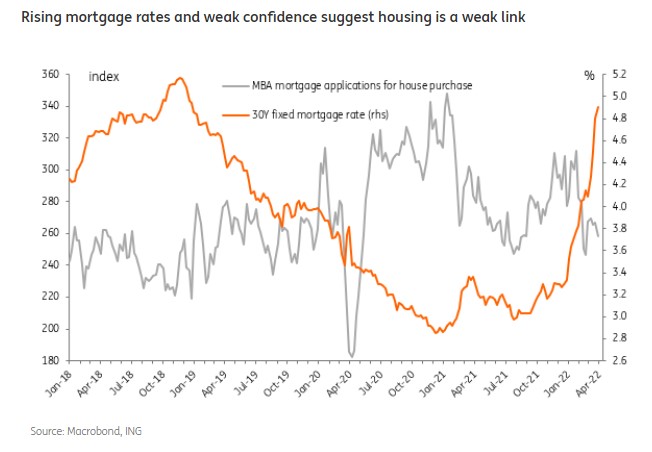 More recession talk and housing could be key

With the Fed signalling the prospect of rapid-fire interest rate increases to get policy restrictive, it heightens the chances of a policy miss-step that could be enough to topple the economy into a recession. That is certainly the fear of some in the market with many citing the brief 2-10Y Treasury yield curve inversion. Recession is a rising risk and we see perhaps a 30% chance of that happening in the next 12-18 months.

One area that is vulnerable and could be the catalyst for a downturn in economic activity is the housing market. Prices have risen 30% nationally since the start of the pandemic due to massive fiscal and monetary stimulus boosting demand and a lack of inventory for sale. Mortgage rates are surging though in response to higher market interest rates, as seen in the chart below, and this is already pointing to a downturn in demand for mortgages for home purchases. At the same time, consumer confidence is at levels on par with the global financial crisis in 2008, highlighting how the squeeze on household spending power is hurting.

With building permits and housing starts having accelerated we could conceivably swing from excess demand to excess supply over the next year, which could depress both housing activity and prices and feed back negatively into consumer activity. 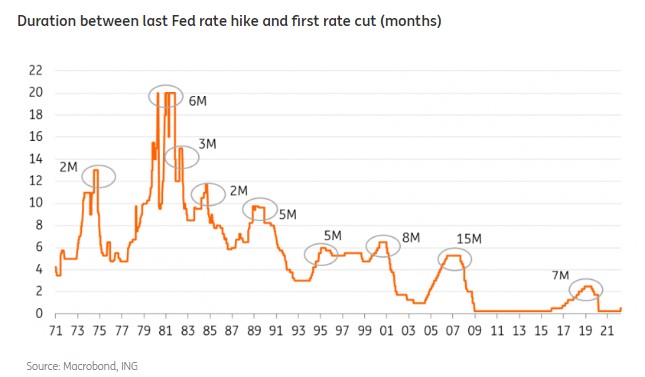 The Fed won’t leave it long before cutting rates again

Financial markets are already pricing in rate cuts in 2024, but we suspect that they could come sooner. The average period of time between the last Fed hike in a cycle and the first rate cut has only been 7-8 months over the past 50 years. A rate hike peak in the first quarter of 2023 would typically suggest rate cuts in the fourth quarter of 2023 and that is what we are forecasting as seen in the top chart. It suggests that the Fed’s aspiration of shrinking the balance sheet may come to a halt late next year too.
Source: ING