Taper is coming soon
As universally expected, the Fed funds target rate range has been left at 0-0.25% with the monthly QE asset purchases kept at a total of $120bn split $80bn Treasury securities and $40bn agency MBS. The press conference and accompanying material show quite a big shift in thinking at the Fed though, particularly on the path of interest rates.

Firstly, in terms of the taper the statement acknowledges the ongoing progress regarding its maximum employment and price stability goals. If that progress continues “as broadly expected, the Committee judges that a moderation in the pace of asset purchases may soon be warranted”.

Assets on the Fed’s balance sheet vs. interest rates 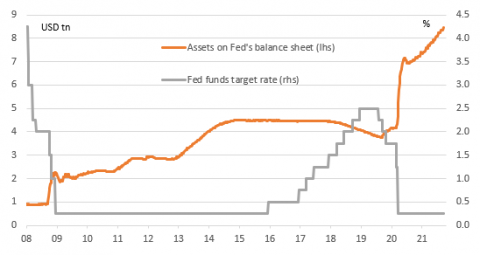 The Fed haven’t given us a detailed outline of the tapering path and we probably won’t get that until the actual announcement – Powell merely states it ending around mid 2022 “may be appropriate”. A Bloomberg survey published this week showed a majority of analysts expect a November announcement with a December start point, which we agree with. The consensus is for it to be a straight-line path of $15bn of tapering each month ($10bn Treasuries and $5bn Agency MBS) so it takes eight months (July). We think it could start at this rate, but wouldn’t be surprised to see an acceleration towards the end and it concluding in six (May 2022).

Source: Federal Reserve, ING
Fed inching towards 2022 lift-off
As for what happens afterwards, the updated Fed forecasts shows a growing desire to raise rates sooner and more aggressively. GDP growth has been revised down in the near-term (see table above), presumably on the speed bump caused by the recent Covid resurgence, but the Fed have revised up 2022 and 2023 growth to compensate. Inflation has been revised substantially higher yet again, but is still described as “largely transitory”.

However, the key story is the dot plot for interest rates. The FOMC is now split 9-9 on whether rates will be raised next year (3 expect a 50bp rate hike, 6 expect 25bp with nine looking for no change). They have also raised their forecast for 2023 with the median now at 1% for end year mid-point versus 0.6% in July. Note too that there is only one FOMC member who doesn’t expect a rate rise by the end of 2023, a massive change from just six months ago. The forecasts have been extended to include 2024, for which they are projecting the policy rate coming in at 1.8% – well ahead of market expectations – with the long-term rate at 2.5%. 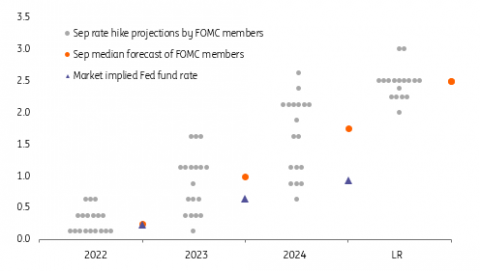 September 2022 rate lift-off looking more likely
We continue to think that inflation will be more persistent than the Fed does with ongoing supply chain constraints, worker shortages and other production bottlenecks unlikely to ease meaningfully before the end of this year and possibly not until well into next. This is keeping costs elevated with the Fed’s own Beige Book already warning that “several Districts indicated that businesses anticipate significant hikes in their selling prices in the months ahead”, suggesting corporate pricing power is back.

With the latest Covid wave showing signs of abating we also expect a re-acceleration of activity through 4Q, which we think will lead to even more Fed members backing a 2022 rate hike in the December forecast update.

We would certainly agree and are forecasting the first move in September 2022 with a follow up hike in December. By moving earlier this will mean a lower terminal Fed funds rate – we see it peaking at 1.5% versus the 2.5% figure projected by the Federal Reserve.

Treasuries: The Fed’s dots have moved, but the back end is asking some tough questions
The impact effect of the FOMC outcome has been a mild ratchet higher on front end rates and a mild nudge lower in longer tenor rates. But there is also some volatility evident as the market digests that while nothing has actually changed, the timing of the first hike is now sooner and a more complete taper announcement is more probable from the November meeting. Risk assets seem quite unbothered about the Fed’s intentions, which is helping to mute any material bond market reaction. Even though risk assets have had a tough September to date, culminating in another layer of worry coming from China’s Evergrande, it has not caused the Fed to shy away from nodding approval towards the net improvement in the US economy.

The impact effect on rates is break lower in the 10yr yield, which even though driven by a fall in inflation expectations, does not gel with the more constructive macro outlook coming from the Fed. It seems that the long end is playing with the notion that the Fed is on a path towards a policy mistake if they were to tighten too soon. At the same time, the belly of the curve is still cheap to the wings, which is in fact maintaining a net bearish tilt, although flattening on the 2/5yr segment is muting this. The pull lower in longer tenor rates is coming from an easing lower in inflation breakevens. Real yields have not budged, but if there is to be a follow-through reversal upside test in market rates ahead it will likely come from real yields testing higher.

In the end, the 10yr is holding in the 1.3% area. It’s been at or about that level for a number of weeks now. It’s showing a mild vulnerability to the downside in yield as an impact outcome. A break lower here would not be very helpful, as it would be seen as pushing against the Fed. Remember, should the Fed want to hike rates at some point (and they will), the ideal starting point is a steep curve, or at the very least a decent gap between the funds rate and long end rates, as that’s what provides the room to push official rates higher. A taper will help, as it will stop the Fed buying of bonds, removing one of the bullish impulses that has helped to force market yields down.

The Fed has also doubled the counterparty cap on the reverse repo facility from USD80bn to USD160bn. The volumes going into the facility hit a new high yesterday, and this move is a signal of direction of travel, ie, an indication that liquidity going into the facility are more likely to rise ahead. The debt ceiling remains an obstacle as it prevents the Treasury from coming in to mop up liquidity. It’s also an indication that there is a lot of liquidity swashing around still. From a purely technical perspective, the sooner the taper comes the better.

FX: Looks like dollar bulls need more from the Fed
In a slightly surprising reaction in FX markets, the dollar initially sold off despite a set of Dot Plots expressing much greater confidence from the Fed in its tightening cycle. News that the median expectation for the first hike has been brought further forward to 2022 and that the median expectation for 2024 is 1.8% (way above anything priced in the OIS market) would normally be taken as a dollar positive.

But this does seem a hawkish shift from the Fed – especially since it was not so long ago that the Fed was telling us that rates would not be raised until 2024 on the back of their new average inflation targeting regime.

This hawkish shift from the Fed does suggest the market will become more sensitive to stronger US activity/higher inflation data. We suspect the dollar does regain the ground lost today – primarily against those currencies backed by central banks with a more relaxed attitude to inflation, i.e. EUR, SEK, CHF and also PLN. Better withstanding any dollar rebound will be those currencies backed by pro-active central bank tightening and on the right side of the terms of trade ledger when it comes to the commodity story. Here NOK and RUB should continue to outperform.

In the background, the Evergrande story is still playing out – also seen as positive dollar story. Until that is resolved, we suspect the market will still be minded to buy the dollars on dips.
Source: ING

2021-09-23
hellenicshippingnews...
Previous: APM Terminals Elizabeth honored by Bi-State Motor Carriers as terminal of the year
Next: What is the Evergrande debt crisis and why does it matter for the global economy?