The taper is on!
The Federal Reserve has formally acknowledged the economy is well on the road to recovery and announced the “taper”. Monthly asset purchases will slow from $120bn to $105bn later this month with purchases reduced $15bn each and every month until the program is concluded in May (on this timetable). The composition is a $10bn reduction each month in Treasury purchases and $5bn per month in agency mortgage-backed securities.

There is an element of flexibility in that they are “prepared to adjust the pace of purchases if warranted by changes in the economic outlook”. Nonetheless, monetary policy remains ultra-accommodative and in no way can this be described as policy tightening, with the guidance indicating the Fed’s balance sheet will reach $9tn next year. Note also that the Fed’s balance sheet has expanded from the equivalent of 18% of GDP to an astonishing 36% of US GDP through the pandemic.

Assets on the Federal Reserve balance sheet (US$ tn & % of GDP)

Within the statement the Fed acknowledge the strengthening economy, but they continue to insist that “elevated” inflation is largely the result of “factors that are expected to be transitory”. They believe that “an easing of supply constraints are expected to support continued gains in economic activity and employment as well as a reduction in inflation”. We are all hoping this, but so far there is little evidence of it materialising in a meaningful way.

They continue to state that the FOMC “expects it will be appropriate to maintain this target range until labor market conditions have reached levels consistent with the Committee’s assessments of maximum employment and inflation has risen to 2 percent and is on track to moderately exceed 2 percent for some time.”

This is a very gradual start to policy normalisation with the Fed at pains to suggest rate hikes remain a long way off. However, the economy is bouncing back and inflation risks are rising, again leading us to conclude that policy tightening is not that far away.

Soft patch is over – growth and inflation are moving higher

The US’s 3Q Delta wave related soft patch has ended with early indications for 4Q suggesting consumer activity is rebounding sharply and businesses are keen to put money to work. Air passenger numbers and restaurant dining visits are rising once again while hotel occupancy is back up to 64% with today’s ISM services index confirming the recovery by hitting a new all-time high in October.

At the same time inflation pressures are intensifying. All parts of the US economy are experiencing rising costs while business surveys suggest a growing ability to pass those costs onto customers. The fact that the employment cost index surged 1.3% quarter-on-quarter is a clear warning sign of the depth and breadth of the inflation threat. On top of this, surging housing costs, energy and second-hand car prices make it highly likely that US headline consumer price inflation will head above 6% throughout the winter with core inflation peaking above 5%.

Given this backdrop, the Fed’s assertion that “longer term inflation expectations remain well anchored at 2 percent”, look less and less credible when we glance at the survey evidence – see chart below.

Inflation expectations not looking quite so anchored… 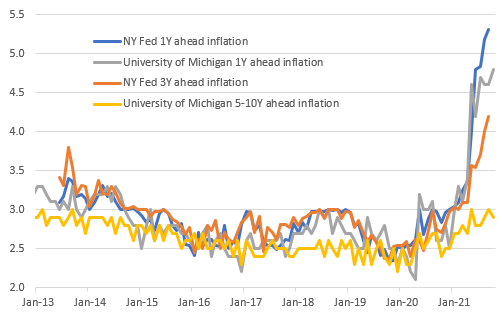 Rate risks increasingly to the upside
Given our growth and inflation projections we see a strong chance of QE being concluded earlier than outlined today, possibly in 1Q 2022. We don’t think interest rate increases will be far behind with two hikes forecast in the second half of 2022 – once in September and once in December. Given the evident intensification of inflation pressures we see the risks as being skewed more towards the Fed reversing course on its views and hiking three times rather than by a more gradual one or even zero 2022 rate hike scenario that remains the consensus forecast amongst economists.

The Fed morphs from liquidity creation to contraction in due course
Federal Reserve holding of securities has practically doubled to almost $8tn as a consequence of the pandemic-inspired bond buying. Now that the Fed will slow down purchases, and ultimately stop buying altogether, the balance sheet holdings freeze.

That will bring to an end the liquidity additions that accompany the bond buying. With almost USD1.5tr getting shipped back to the Fed on the overnight reverse repo facility, there is clearly little need for liquidity support. That is the clear technical rationale for ending the bond buying program. It also implies that the Fed can start to manage this liquidity excess out of the system.

At the same time there is an ongoing imbalance between liquidity and floating collateral in the system, and this is unlikely to change until the debt ceiling is suspended (or raised), which is unlikely before December. The pressure of the debt ceiling makes it difficult for the Treasury to re-build its bills issuance profile. It is likely that the Treasury will choose to do so as soon as they can, even as they have announced a reduction in longer term issuance as we morph into a post-pandemic phase.

The biggest take-away from the taper is a phase shift from reserves addition to reserves contraction, or at the very least a relative reduction in reserves. That will make liquidity feel more tight, placing upward pressure on market rates. But we really need to see a debt ceiling suspension before there is a real impact on repo.

FX: Tapering offers supportive narrative to the dollar
The reaction in the FX market after the FOMC statement was quite muted, as an initial drop in the dollar was almost immediately reversed. Arguably, this FOMC meeting may have been the biggest challenge for dollar bulls given how markets had already fully priced in the tapering announcement and some cautiousness on the inflation side could have hit the greenback.

After having “survived” the announcement, we think the dollar can draw benefits from the Fed tapering/tightening story on a quite consistent basis. The recent dollar correction was at least partly due to the hawkish re-pricing across other major central banks, but in many cases (like the ECB) the current tightening expectations appear too aggressive compared to central bank communication and the respective currencies are facing downside risks from a dovish re-pricing. On the contrary, the OIS market is currently pricing in a policy rate of 1.45% in three years, below the 1.80% median Dot Plot. Any revisions to the Dot Plots should, if anything, be to the upside from now on, and we think the dollar has a wider than other G10 currencies to receive a lift from rising rate expectations.

The low-yielders, like the EUR and the JPY, should be the main victims of Fed-induced dollar strength. We see the risks are skewed towards 1.15 in EUR/USD and 115.00 in USD/JPY this November, although seasonality factors may see the dollar slightly weaker in December.
Source: ING