Fitch Ratings has raised its oil and gas price assumptions for 2022-2024 reflecting significantly increased risks of supply disruptions of Russian hydrocarbons following the conflict in Ukraine, and the intention of Europe and some non-European countries to reduce their dependency on Russian fuel, increasing demand for supplies elsewhere and exacerbating market tightness. Fitch’s long-term price assumptions are unchanged, reflecting the impact of the energy transition on demand and the marginal cost of production.

The increased oil price assumptions for both Brent and West Texas Intermediate (WTI) benchmarks recognise significantly heightened supply disruption risks and the possibility that several million barrels of oil per day (mbpd) could be removed from the market as a result of sanctions or counter-measures if the Russia-Ukraine conflict continues to escalate. In 2019 (a typical pre-pandemic year), Russia produced 11.5mbpd of oil (12% of global production, according to BP’s ‘Statistical Review of World Energy’), and exported 9.2mbpd of crude oil and oil products. Europe purchased about 57% of Russia’s exports. Other large customers included China (18%) and the US (6%).

Global demand and oil consumption have almost returned to pre-pandemic levels, while increases in OPEC+ supply have been in line with the previously agreed schedule, with another increase of 400,000bpd due in April.

There are several sources of additional crude supplies that could eventually alleviate market tightness over time. Saudi Arabia and the UAE have spare capacity of about 2mbpd and 1mbpd, respectively, although there is no commitment from these countries to increase production to compensate for potential losses of Russian oil. Furthermore, there are reportedly discussions to relax sanctions against Iran (which could add 1.5mbpd of crude supply to the market in the short and medium term) and Venezuela (with little clarity over potential additional volumes due to significant underinvestment in the country’s oil infrastructure). Some Russian supplies could be redirected to countries with lower risk of sanctions, freeing up volumes of non-Russian oil for those countries that introduced sanctions. 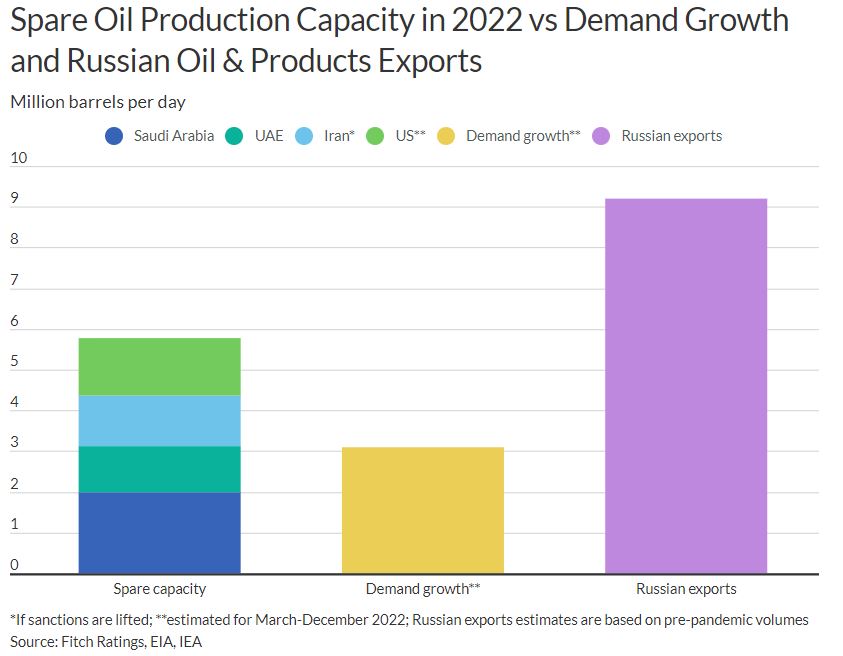 Russian Urals oil is currently trading with a significant discount to Brent (about USD20), mostly due to self-restrictions by oil buyers over concerns of further sanctions on the Russian energy sector (only the US, UK and Canada have decided to ban or phase out Russian oil exports so far) and disrupted access to trade finance. At the same time Brent’s three-year forward contracts are in steep backwardation with a spread of more than USD20 to spot prices, reflecting market expectations of rebalancing in the medium term. 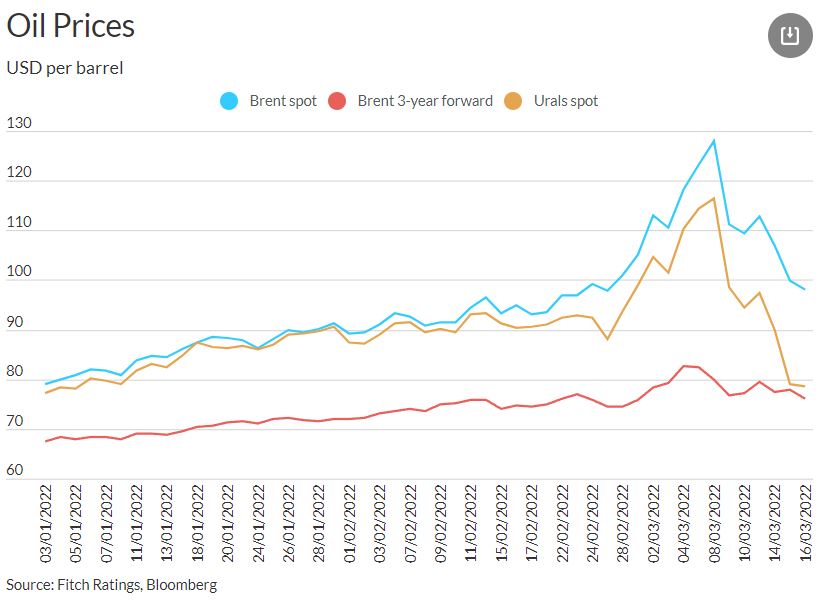 The increased Title Transfer Facility (TTF) gas price assumptions reflect very tight supply in the European market due to a combination of reduced exports from Russia-controlled Gazprom, low inventories and the EU’s intention to cut its fuel dependency on Russia, focusing on additional liquefied natural gas supplies (and energy savings and wind and solar front loading) in the short term, which should support higher prices in the European gas market in the medium term.

The higher Henry Hub assumptions reflect more favourable demand conditions in the US and globally, while supply is still catching up.
Source: Fitch Ratings