In some recent cases, hot slag/sparks have dropped into cargo holds and set fire to packaging or tarpaulins covering the cargo below. In addition to the direct fire damage, further damage to cargo has occurred due to water damage from subsequent firefighting operations.

In another instance, where there was a mixed stow in one hold, bulk cargo in an adjacent hold decomposed due to heat transfer where temporary lashing points were being fitted to a transverse bulkhead for securing of general cargo. 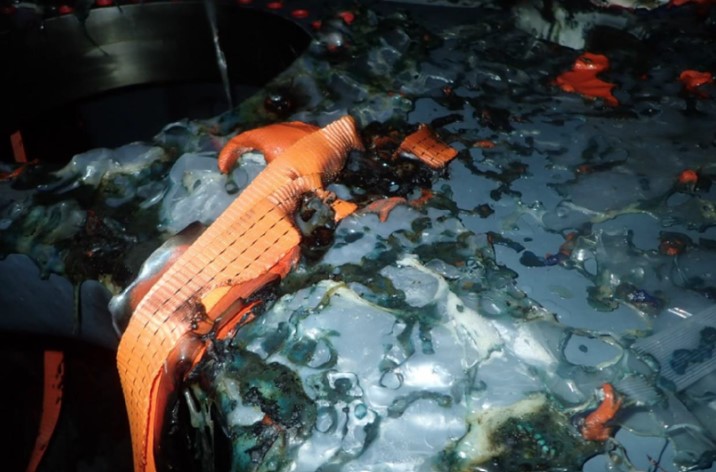 In some cases, no fire watch had been arranged due to a lack of awareness that heat/sparks/slag can propagate through steel plating separating the point of work and cargo hold. In others, although a fire watch had been placed, it was not positioned correctly and/or there was too much reliance on fire retardant tape/blankets which were either poorly placed with no coverage at some points due to gaps or proved inadequate to deal with the high temperatures involved.

It is recommended that:
• Toolbox talks and hot work permits must be specific to the task at hand and recognise the risk of heat transfer/sparks/molten slag in all adjacent areas (above, below and to all sides), including cargo holds.

• The vessel must seek permission from the port and have an approved hot work permit issued by the port to undertake fitting or removal of lashings.

• Where the work is carried out by stevedores this must be closely supervised by crew and hot work permits still need to be issued by the vessel and port.

• Where protective coverings are used to protect cargo, they must be effectively placed and sufficiently robust – heavy duty welding blankets are readily available and should be used. More than one layer may be required. If possible hot work should only be made when holds are free of cargo.

• Fire watches must be in place and need to be correctly located to see all possible hot zones. Watching for smoke from the hold entrance is not sufficient since the fire will already be well set at this stage.

• If the fire watch discovers the fire at an early stage, use of clean agent fire extinguishers is preferred, to prevent cargo damage from other extinguishing mediums. This type of extinguisher is not generally available onboard, and it is suggested some are purchased and retained for this type of operation. Ensure they are designed for use on class A fires.

• If the fire is discovered at a later stage, consider use of fixed CO2 system rather than water hoses, to prevent consequential damage.
Source: West of England