Shipping is often regarded as a relatively fragmented business, with over 94,000 vessels split between almost 24,000 owners. However, the level of consolidation varies greatly between sectors, while the recent increases in M&A and restructuring activity have driven some change. This month’s Fleet Analysis takes a look at consolidation amongst shipowners in a selection of shipping sectors. 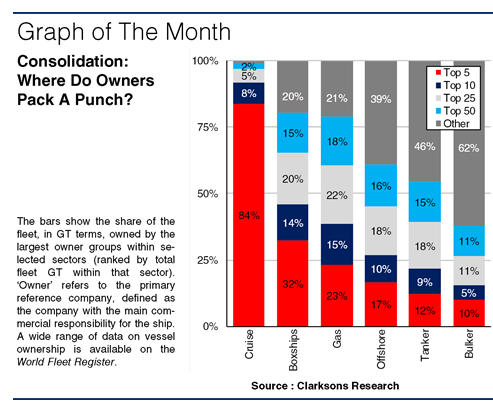 Some of the more consolidated sectors, led by cruise ships, are shown on the left of the graph. As of 1st February 2018 the ‘top five’ owner groups (ranked by the size of their fleet within the sector, in GT terms) owned 84% of cruise tonnage. With each group controlling a number of companies, strong brand loyalty, as well as the huge cost of vessels, make it difficult for new owners to enter the market.

The containership sector has also typically been a more consolidated part of shipping, with 46% of fleet tonnage accounted for by the ‘top ten’ owner groups as of 1st February. This share has risen from 37% at the start of 2010, driven in part by significant M&A activity, such as the acquisition of Hamburg Sud, UASC and CSAV by larger liner companies. Consolidation is even more pronounced when focussing on operation, with the top ten boxship operators deploying 80% of tonnage. Elsewhere, in the gas carrier sector, the ‘top ten’ owner groups accounted for 38% of fleet tonnage at the start of February. However, this was a decline from 49% at the beginning of 2007. Fleet ownership is now divided more evenly between energy majors, who were previously dominant, and independent shipowners, who have increased their share.

A Range Of Combinations
In other sectors, consolidation is less pronounced. The ‘top ten’ offshore owner groups accounted for 27% of fleet tonnage as of 1st February 2018. The diversity of vessel types across the offshore fleet means that many owners specialise in a small number of sub-sectors, limiting the extent of consolidation across the fleet as a whole, although recent M&A activity has driven some change. Meanwhile, at the start of February the ‘top ten’ tanker owner groups accounted for 21% of fleet tonnage. Although this was a lower share than elsewhere, consolidation varies across the sector, for example due to high capital costs in the larger crude tanker sizes.

All Chopped Up
The bulkcarrier sector remains the least consolidated of the major vessel types, with the ‘top ten’ owner groups representing 15% of fleet tonnage at the start of February. Smaller owners have typically accounted for a higher share of the bulker fleet than in other sectors, and as of 1st February, there were almost 1,500 owner groups with just 1-5 vessels.

Shipping as a whole remains a relatively fragmented industry, with smaller owners accounting for a large share of vessels. Equally, owner groups with fleets of more than 50 vessels account for 47% of total tonnage, and M&A activity could continue to drive consolidation. However, with some sectors dominated by a small number of groups and others remaining more fragmented, consolidation across the world fleet still varies hugely.
Source: Clarkson Research Services Limited