Flex LNG Ltd. Says Challenging First Half Market Conditions Had a Negative Impact on Financial Results, To List on NYSE In June

Øystein M Kalleklev, CEO comments:
“First half of 2019 has been challenging due to the disruption in the LNG trade caused by a unseasonably mild winter, a glut of LNG hitting the market as well as shift in trading patterns favouring shorter hauls to Europe. We in Flex LNG have deliberately elected to sail against the current to be able to position us for the shift in currents expected to take place in the second half of the year. With tighter market and significant contango in the gas market we are upbeat about the outlook for owners of uncommitted two stroke LNG carriers. Furthermore we continue to strengthen the organization with insourcing of ship management with the aim of delivering the highest standard in terms of customer experience. Additionally, our US listing will give us access to a larger and deeper capital market which is advantageous in such a capital intensive shipping segment as LNG transportation.” 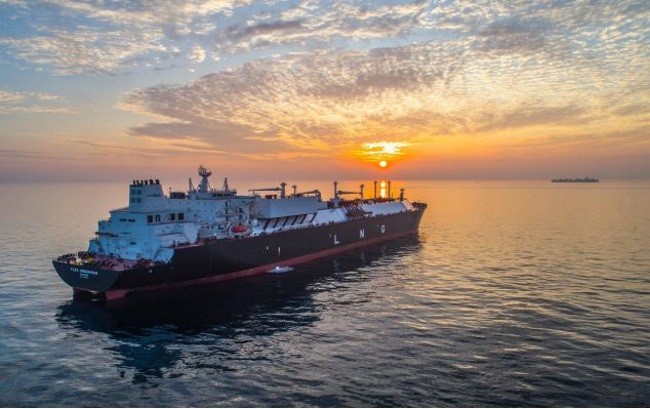 Business Update
In May, the Company announced that it had publicly filed a registration statement on Form 20-F with the SEC relating to the proposed listing of its ordinary shares on the NYSE. The Company’s registration statement on Form 20-F was declared effective by the SEC on May 30, 2019. No new securities will be issued in connection with the listing, and trading of the shares on the NYSE is expected to commence in June 2019. Following the listing, the Company’s ordinary shares will be listed for trading on both the NYSE and the Oslo Stock Exchange under the ticker “FLNG”.

In April, the Company signed a $250 million secured term loan facility for the financing of Flex Constellation and Flex Courageous. The facility is expected to be drawn upon delivery of the vessels from the shipyard, scheduled for June and August 2019, respectively. In April, the Company also entered into a $300 million sale and charter-back transaction with Hyundai Glovis for the vessels Flex Enterprise and Flex Endeavour. The transaction is expected to close in the third quarter 2019. Both the $250 million term loan and the transaction with Hyundai Glovis remain subject to satisfaction of customary closing conditions.

The Company currently has four vessels on the water and nine additional newbuildings under construction, which are set for delivery between 2019 and 2021. With such scale, Flex LNG has the ability to be present in all three major basins providing for enhanced customer relationships, increased vessel utilization and shorter distance to load ports. The Company’s vessels currently in operation and under construction are expected to meet charterer’s preferences for the substantially improved unit transportation cost of larger and more fuel efficient vessels. The Company’s fleet presents a diversified portfolio of two stroke vessels with both MEGI and XD-F propulsion systems. Seven of the vessels are also equipped with Full Re-liquefaction System (“FRS”) or Partial Re-liquefaction Systems (“PRS”) with associated improvements in boil off rate.

Finance update
In April, the Company signed a $250 million secured term loan facility from a syndicate of banks for the financing of the two newbuildings Flex Constellation and Flex Courageous. The financing is expected to be drawn upon delivery of the vessels from the shipyard, which is currently scheduled for June and August 2019, respectively. For further information please see Note 12: Subsequent events.

In April, the Company announced that it has entered into a sale and charter-back transaction with Hyundai Glovis for the vessels Flex Endeavour and Flex Enterprise. Under the agreement, the Company will sell the vessels for a gross consideration of $420 million, with a net consideration of $300 million adjusted for a non-amortizing and non-interest bearing seller’s credit of $120 million in total. The vessels will be chartered back from Hyundai Glovis, on a time charter basis, for a period of 10 years. For further information please see Note 12: Subsequent events.

The Flex Endeavour and Flex Enterprise are currently financed under the $315 million secured term loan facility, and upon closing of the transaction with Hyundai Glovis, the Company will prepay the two tranches relating to the vessels, totalling approximately $194 million. The transaction is thus expected to have a positive cash effect of approximately $100 million, net of fees and prepayment of related debt.

LNG Market Outlook
During the first quarter 2019, spot LNG freight rates plummeted from the record levels seen in the previous quarter. Asia winter demand came in lower than expected due to an unseasonably mild weather in northern Asia, coupled with Japanese nuclear power plants restarting as well as an oversupplied LNG market due to start-up of new LNG production. Asian LNG prices moved lower, trading closer to or at par with key US and European LNG markers, preventing arbitrage opportunities between the markets. Despite significant growth in liquefaction and exported volumes, sailing distances and utilization where challenged by muted trade in the quarter.

Preliminary tracking data from KPLER point towards a 15% increase year-on-year for global LNG exports in the first quarter 2019. The combined exports from Australia, Russia and USA reached 32.6 million tonnes, representing a year-on-year growth of close to 30%. In the same period, the three largest importers Japan, China and South Korea imported 47.25 million tonnes of LNG, representing a slight decline of ~3% compared to first quarter 2018 primarily due to lower heating demand.

Demand is expected to grow firmly as China in particular continues to focus on energy efficiency and improvements in air quality in key metropolitan areas. Economic policies in the country are to an increasing degree focused on environmental advances rather than pure economical growth. Chinese LNG imports grew 41% in 2018 to ~53 Mtpa. US LNG tariffs have so far primarily affected the Chinese sourcing of LNG, not the country’s growing import volumes, up 28% compared to the first quarter 2018.

Outlook for LNG shipping demand, albeit showing slow growth in the first quarter 2019, remains sound due to new liquefaction capacity coming on-line in the western hemisphere, coupled with robust demand growth in the eastern parts of the world. Traditionally market analysts have estimated shipping demand to increase by 1.3 LNG carriers per new million ton of liquefaction capacity per annum. Recent liquefaction growth in USA and Russia yield a higher multiple as the distance from supply to key markets are considerable longer implying tonne miles growth.

Flex LNG expects the market for energy efficient modern LNG carriers to improve going forward, as mere seasonal effects fade, and the markets stabilize. The long term projections for the industry are well supported, and Flex LNG is very well positioned to capitalize on the global shift for cleaner energy.