About 70 laden VLCCs remain stationary for at least 4 weeks, prove that the contango “play” in the crude tanker market is very much at play. In its latest weekly report, shipbroker Gibson said that “in recent weeks reports about floating storage have featured in the international press. In the 2nd half of April Reuters reported that oil held in tanker floating storage reached at least 160 million barrels, including 60 VLCCs, up massively from levels witnessed just a couple of months ago. There is nothing new about floating storage, which we classify as vessels laden and stationary for at least a four week period. Back in 2015/16 up to 50 VLCCs were involved in crude floating storage, in part due to a contango play and partly due to Iranian sanctions. A storage flotilla was even more impressive in the 2nd half of 2009/early 2010, with tankers being used to store both crude and products. Back then, the number of vessels tied up in storage (from VLCCs down to LR1/Panamaxes) peaked at 131 units, with VLCC numbers being as high as 56 vessels at one point”. 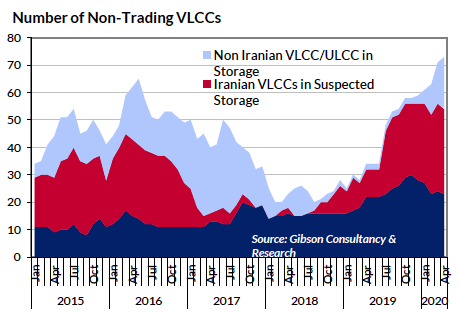 According to Gibson, “conditions for floating storage are favourable once again due to a massive imbalance between oil supply and demand. Currently, Gibson counts just over 70 laden VLCCs that have been stationary for at least four weeks. 20 of these tankers have international crude on board, 31 are Iranian (NITC) tankers, whilst the remaining VLCCs are involved in products storage, mainly dirty petroleum products around the Singapore area. In addition to these numbers, we also count 15 converted VLCCs (now FSOs) in permanent crude and products storage located around Indonesia and Malaysia. The number of VLCCs in international crude storage, which was almost nonexistent at the end of last year, increased notably in March and April. In contrast, the number of tankers involved in Iranian floating storage and products floating storage has barely changed in recent months”. 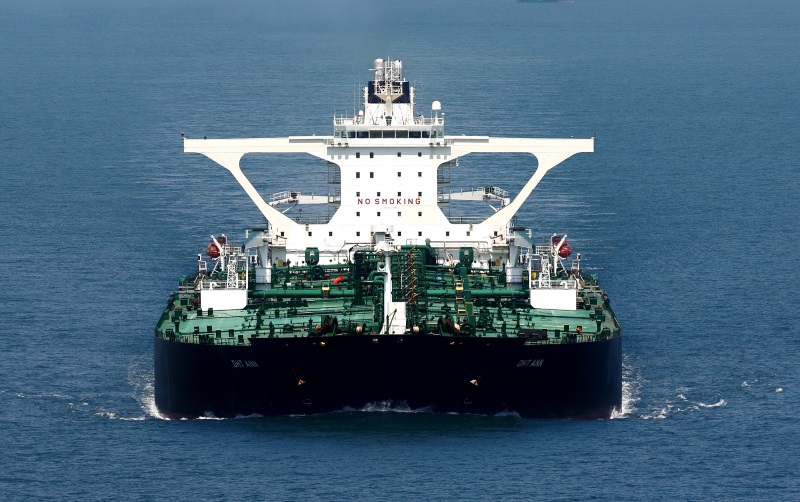 “What is interesting to note though is an increase in a number of laden VLCCs being stationary between 1 and 4 weeks. AIS data shows that at present, around 20 VLCCs fall into this category, double the level seen in early April. Many of these tankers represent unexpected discharge delays due to quarantine measures; however, at least some could be forced to store for an extended period due to logistical bottlenecks, such as ullage issues”, the shipbroker said.

Gibson added that “apart from forced storage, there remains a potential for a contango play. This view is supported by significant increases in time charter activity, most notably when the contango widened significantly in March and April. Over the past two months around 80 VLCC time charter fixtures were reported, compared to just 13 over the corresponding period last year. A 3 month spread in Brent futures peaked on 21 April at around $9.75/bbl, supporting 3 month storage at $204,000/day on a VLCC before any profit margin for the trader is accounted for. Now the contango structure has softened substantially, as evidence started to build that May loading program out of the Middle East and Russia will be notably lower, whilst news about easing quarantine restrictions also offered some support to oil prices. At the time of writing, the 3 months spread stood at $2.23/bbl, supporting 3 month VLCC storage at $38,000/day. Although the contango is much weaker, so are VLCC spot rates. TD3C closed Friday at around WS58 for a modern vessel, equivalent to $54,000/day, but a lower rate could be achieved on a less competitive tanker, making a contango play potentially viable”.

“However, crude futures are volatile and the pricing structure could change dramatically in the weeks ahead. When it comes to floating storage, the picture will continue to evolve. It remains to be seen how many tankers fixed for time charter business recently will actually be tied up in storage for an extended period of time. Similarly, with the spot market being at much lower levels, new opportunities to lock into a contango play could also emerge. Watch this space”, Gibson concluded.
Nikos Roussanoglou, Hellenic Shipping News Worldwide