The Port of Los Angeles moved more cargo in 2018 than any time in its 111-year history, racking up 9,458,749 Twenty-Foot Equivalent Units (TEUs), 1.2 percent more than 2017’s record-breaking year. It is the third consecutive year of record volumes for the nation’s #1 gateway for containerized trade and the most cargo moved annually by a Western Hemisphere port.

“Los Angeles is open for business and engaged with the world — and now, we have another record year at the Port of Los Angeles to show for it,” said Mayor Eric Garcetti. “Our Port helps make L.A. a global hub for commerce, and it continues to drive our economy forward by creating jobs and expanding opportunity across the City.”

“2018 was marked by a robust economy coupled with tariff-induced surges of cargo headed to U.S. retail and manufacturing sectors,” said Port of Los Angeles Executive Director Gene Seroka. “These extraordinary volumes highlight the need for continued stakeholder collaboration on methods to maximize supply chain efficiency. Through a number of initiatives, we are focused on both physical and digital infrastructure enhancements that continue to ensure the reliable, safe and efficient conveyance of cargo through our gateway.” 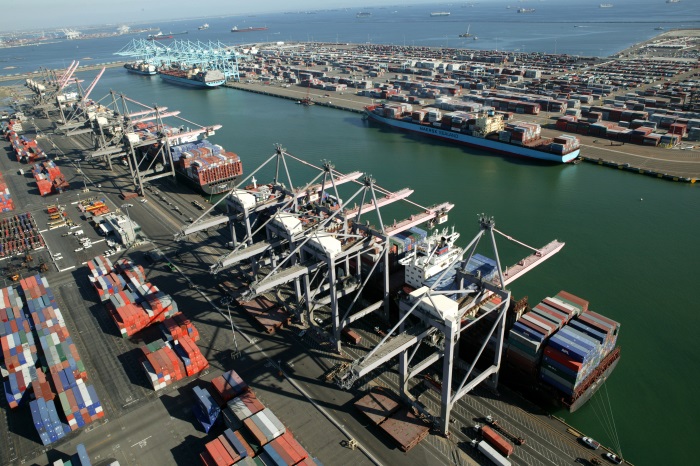 In December, the Port processed 903,258 TEUs, the busiest December in the Port’s 111-year history and a 15.9 percent jump compared to the previous year. It was the sixth consecutive month of volumes exceeding 800,000 TEUs.

“The ILWU is proud to be the backbone of San Pedro Bay port complex,” said Mark Mendoza, President of the International Longshore and Warehouse Union, Local 13. “Day and night, the men and women of the ILWU will continue to work the docks to keep this port complex the number one trade gateway in the United States.”

“The Port of Los Angeles continues to be a national leader in cargo volume and innovation,” said John McLaurin, President of the Pacific Merchant Shipping Association (PMSA). “These record volumes are a reflection of the dedication and hard work of the Port and all of the supply chain partners.”