For Some Wounded U.S. Drillers, the Oil Rout Never Ended

More than a year after exiting bankruptcy, SandRidge Energy Inc. is stuck in stock-market purgatory.

The oil and gas explorer has seen its stock sink 37 percent since October 2016, despite a restructuring that wiped out $4 billion in debt. Activist investor Carl Icahn is threatening a proxy fight, and last week SandRidge rejected a merger that would have valued the once $11 billion company at just $589 million.

For drillers trying to return from the fiscal brink, it’s a familiar plight. Even with global crude prices climbing, bankruptcy survivors such as SandRidge and Ultra Petroleum Corp. have found a second act’s not so easy. The companies have endured stock crashes, executive purges and shareholder revolts as investors learn the U.S. shale boom can’t save every player. SandRidge has fallen 33 percent this year, while Ultra has lost 54 percent of its value.

“The bottom line is a lot of these companies didn’t have very good assets to begin with,” said Leo Mariani, an analyst at NatAlliance Securities in Austin, Texas. “You can go through bankruptcy and wipe away debt and that’s all well and good, but the assets they ended up with are still not very attractive.”

Since 2014, when crude began an historic slide, at least 134 North American oil and gas companies have declared bankruptcy, according to Dallas-based law firm Haynes & Boone LLP. For those that eventually resumed trading, returns have been less than stellar:

SandRidge may be the poster child. In November, the Oklahoma shale driller proposed a $750 million purchase of another post-bankruptcy company whose stock has fallen, Bonanza Creek Energy Inc. Icahn blasted the deal as overpriced, and the plan was scrapped by late December. Within weeks, Chief Executive Officer James D. Bennett was let go.

In February, a group of investors pitched a shotgun-wedding merger between SandRidge and yet another bankruptcy graduate, Midstates Petroleum Co. SandRidge rejected the offer on March 19 but said it was open to other bids.

So what’s gone wrong? Requests for comment weren’t returned by SandRidge, Midstates, or Ultra, but here’s what observers see holding back recoveries: 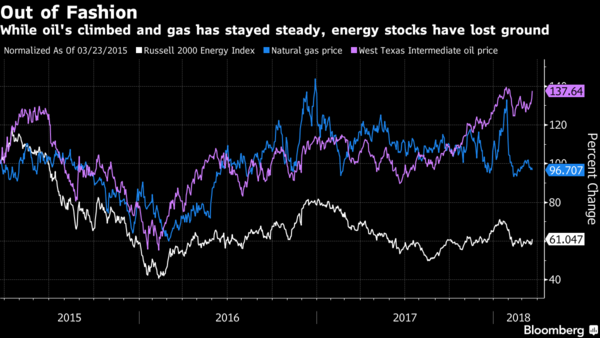 Unloved Acreage
Even the healthiest explorers have seen stocks languish recently, amid worries about a global oil glut. Worse still for many of the bankruptcy survivors, much of their acreage is outside the coveted Permian shale basin in Texas and New Mexico. SandRidge and Midstates, for example, have land in Oklahoma that’s proved less desirable, said Tim Rezvan, a Mizuho Securities USA analyst.

“You had some creditors not realizing how fragile the returns were in each shale play and how contingent they were on an $80 oil price,” Rezvan said by telephone. “Companies that hitched their wagons to the wrong resource play, it’s going to be difficult for them.”

It doesn’t help that much of the companies’ production leans toward natural gas, which hasn’t experienced the same rally as oil.

Short-Term Shareholders
Bankruptcies typically wipe out original stockholders and leave businesses with a different shareholder base — creditors who’ve seen their debt transformed into new equity. Many of the new owners have neither the experience in energy nor the commitment to a particular explorer to stick it out, said Haynes & Boone attorney Charles Beckham Jr.

“A lot of them are hedge funds and distressed debt guys who bought at a discount from prior owners,” Beckham said. “You end up with a group of strangers who now own an oil company. They don’t have the same dream of developing this property and certainly don’t have the capital to carry it through.”

A Not-So-Clean Slate
Bankruptcy’s supposed to let companies start over with a cleaner financial slate, but that hasn’t always been the case.

Ultra Petroleum emerged from Chapter 11 in April 2017 and promptly took on about $2 billion in debt to pay some creditors. The move helped avoid further dilution for the remaining shareholders but it left Houston-based Ultra with additional interest to pay. Chairman and CEO Mike Watford announced his retirement in January after 19 years leading the company, as a top shareholder pushed for changes to the board.

“It can be really tempting for these companies when they start to see the commodity prices rebound to rush to get out of bankruptcy,” he said. “The ones that have struggled are the ones that didn’t plan and didn’t have a lot of liquidity to get through the commodity cycle.”

“It’s harder to figure out how to avoid bankruptcy or how to move on after one because the capital structures are so much more layered and complicated,” he said. “For a long time, the only equity in an oil company was the wildcatter and now you have all these other people that come to the table.”
Source: Bloomberg