Access to finance is one of the major challenges to sustainable development. Across emerging economies, despite considerable progress over the past decade, as many as 1.7 billion people still have no bank account or ability to obtain credit, according to World Bank data.

Even where banking has become more widespread, thanks to inroads made by mobile phones and online banking, individuals and small businesses often encounter procedural obstacles to financing their needs, including reams of paperwork that can act as a deterrent.

To help close such gaps and strengthen their digital financial infrastructure, growing numbers of emerging economies are looking to lay the foundations for an effective “open data” system for finance. This essentially means that financial data is shared digitally among financial institutions with limited effort or manipulation.

Benefits to all of being open

Consumers and financial providers both stand to benefit from the adoption of open data for finance, in advanced as well as emerging economies.

For consumers, a critical element of open-data ecosystems is that they increase access to financial services, including for individuals and small businesses who might otherwise be shut out for lack of a credit history. A well-functioning open-data system allows financial institutions to pull in data such as utility or phone bill payments to create a broader picture of a potential borrower’s creditworthiness. These systems also improve user convenience, including with potentially substantial time savings from less routine form-filling, among others, and provide a much larger range of financial product options.

Financial providers benefit, too. Among other advantages are increased operational efficiency arising from more efficient data management, along with stronger fraud prevention, improved workforce allocation, and reduced friction from data intermediation, given the reduced need to pull in data from third-party providers.

Our recently published study suggests that GDP can get a powerful lift from open data for finance. To date, even economies with the most advanced financial data-sharing mechanisms are not capturing the full potential value, and the economic boost could be especially large in emerging economies. We identified seven mechanisms for value creation from the adoption of open data for finance, which we sized using 24 use cases. Extrapolating to a country or regional level, our analysis suggests that the boost to the economy from broad adoption of open-data ecosystems could be the equivalent of about 1-1.5% of GDP in 2030 in the European Union, the United Kingdom and the United States – and as high as 4-5% in India in 2030, where micro and small businesses have the most to gain from greater and friction-free access to finance. 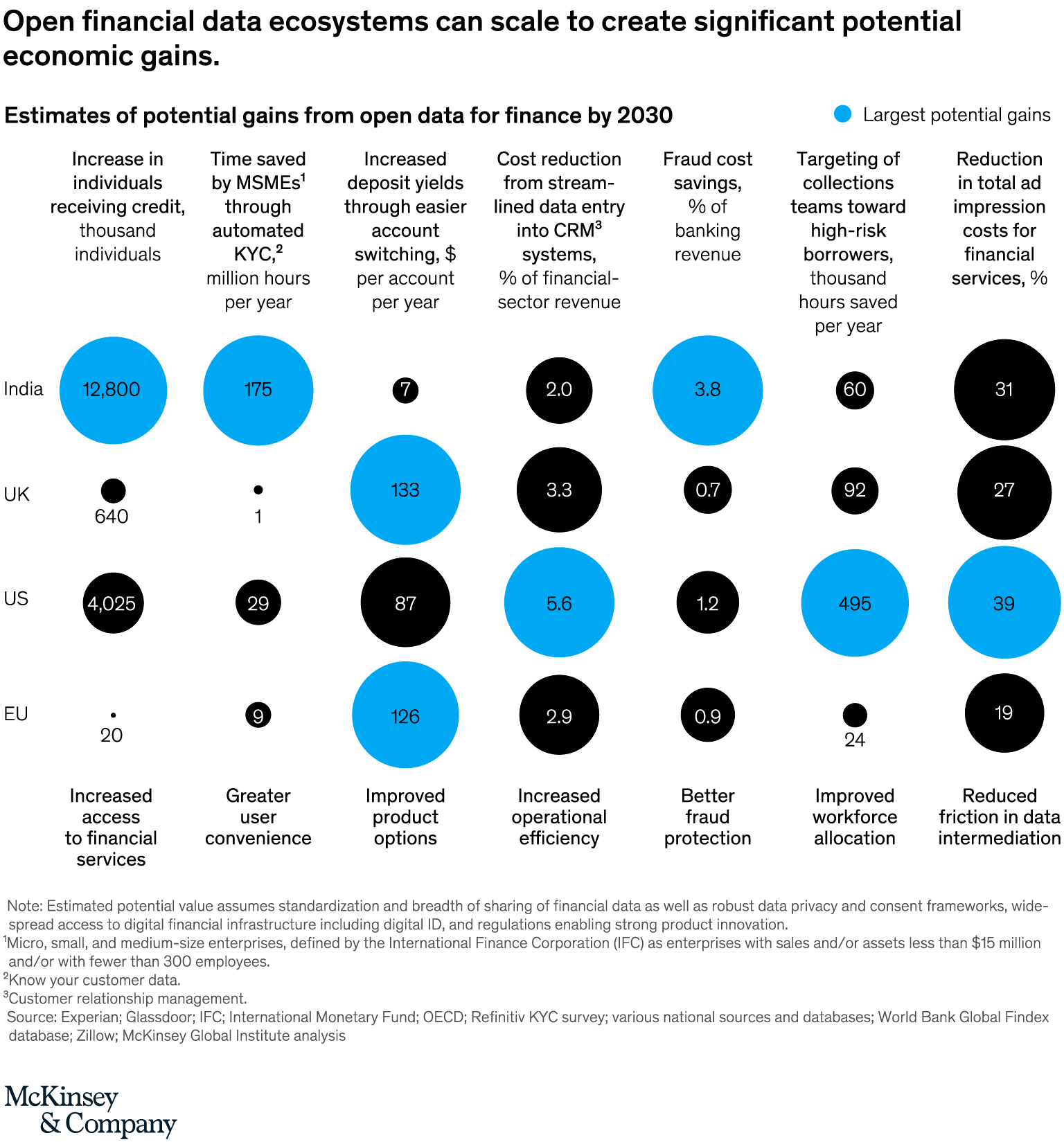 While we didn’t specifically size the potential gains for other emerging economies with lower levels of financial inclusion, we expect that the economic boost for them could be in a similar range to India’s.

Interest in the issue globally has certainly picked up. In Asia, open data-sharing frameworks have been initiated in Hong Kong, and India is fast scaling its interoperable unified payment stack and financial account aggregator mechanism.

In Latin America, Brazil’s central bank has drafted guidelines around data access, technical standards and consumer consent that will require financial institutions to give open-data access to nonbank third parties, and other countries in the region may follow closely behind.

In Africa, a not-for-profit industry group in Nigeria – the Open Technology Foundation – has been set up to develop open data standards and market players are also taking the lead in South Africa. At the same time many African nations have adopted data protection regulation, using the EU’s General Data Protection Regulation (GDPR) as an example framework.

Putting in place an effective system requires careful thinking through of two essential elements: the breadth of the data that are shared, and the degree to which those data are standardised. The broader and more standardised the data, the more effective the open-data system will be, and the larger the economic benefits

Beyond these mechanics and design questions, other key issues need to be addressed, especially data privacy and cybersecurity. A challenge for many emerging economies is how to make their often-nascent digital infrastructure more robust. Solutions range from greater investment in broadband coverage to development of a high-assurance digital ID system. India has been building out its digital financial infrastructure on the back of its Aadhaar digital identification system, for example, and we estimate that the country has managed to access about 60% of the value of open data for finance to date as a result, in part because small companies have sharply reduced the time they need to spend on filling in financial forms.

Digital finance has many aspects that can improve the workings of economies and further the cause of sustainable development. Open data for finance is a powerful tool to that end.
Source: World Economic Forum