Demand for sand to be used by the oil and gas industry in hydraulic fracturing operations in the US is set to grow by 10% in 2019 and 17% in 2020. Frac sand supply, on the other hand, is forecast to increase by 10% in 2019 and then decrease by 2% in 2020 as more Northern White Sand will come off the market. The Eagle Ford Basin in South Texas could play a pivotal role for sand price developments going forward, according to Rystad Energy.

Contracted prices of high-quality Northern White Sand will likely fluctuate between $20 and $25 per ton at the minegate in the medium to long-term, according to Rystad Energy’s latest Proppant Market Report.

Rystad Energy, the independent energy research and consultancy headquartered in Norway with offices across the globe, does not expect in-basin sand prices in the Permian to increase in the forecast period as incremental capacity additions at these mines are not as capital-intensive as at new greenfield mines. 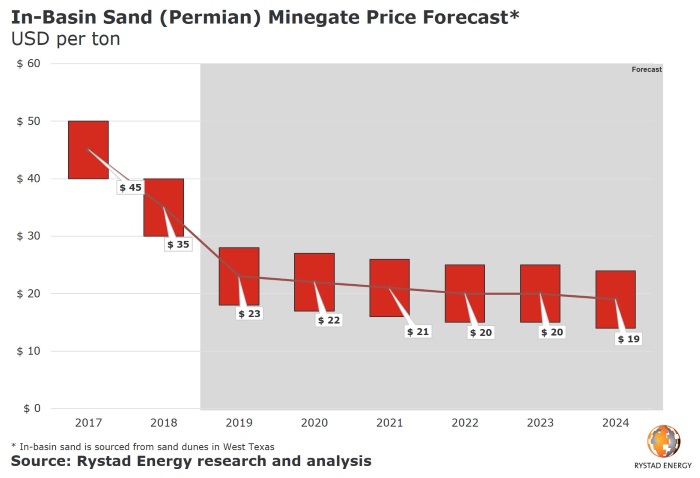 Frac sand, which is used in the hydraulic fracturing process, is a key cost driver for shale well drillers. Prices have been under pressure for some time thanks to oversupply in the market.

However, Northern White Sand prices increased over the past two months on the spot market and are currently above $30 per ton. The price increase has been caused by temporary effects, and most will be resolved shortly, according to Rystad Energy. 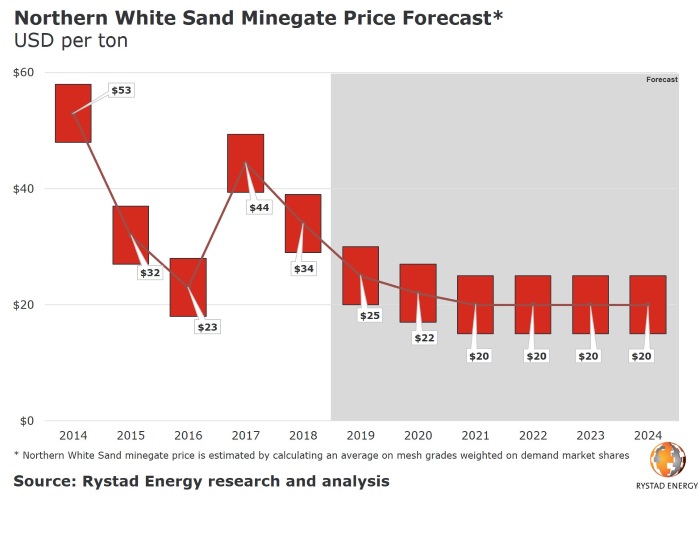 Looking ahead, the Eagle Ford Basin in South Texas will be the key market to watch in the industry.

Around 60% of activity in Eagle Ford occurs at average treatment pressures greater than 8,000 psi. This would suggest lower adoption rates in the basin, which is good news for Northern White Sand.

“In-basin sand mines in Eagle Ford have struggled to reach desired utilization levels in recent months, but we expect this issue to be solved in the near term,” Jacob added.

Frac sand supply is set to reach 239 million tons in 2024. Rystad Energy expects 35% to 40% of Northern White Sand supply – considered the gold standard of the industry with respect to sand quality – to come off the market by the end of 2020.
Source: Rystad Energy

2019-05-27
hellenicshippingnews..
Previous: Oil at a crossroads on US-China trade talks
Next: Coking coal price to remain elevated in 2019— report