The Valencia Containerised Freight Index (VCFI) continues its upward trend and grew by 9.19% in July. It stands at 427,43 points, the highest figure since the start of the series in January 2018.

The VCFI is growing in all geographical areas except the Eastern Mediterranean.

Aurelio Martínez reiterated the need to expand the infrastructures of ports such as València with the forecast that the future of maritime transport depends on “a few powerful port hubs”.

The Valencia Containerised Freight Index (VCFI) for July has once again grown at a rate of 9.19%, making it the first year of growth in export freight from Valenciaport. Thus, in July it stands at 3.427,43 points and accumulates an increase since the beginning of the historical series in January 2018 of 242.74%. As has been the norm in recent months, the increase in the VCFI is a generalised trend and all the areas under study are experiencing a rise in prices, except for the Eastern Mediterranean. The high demand for maritime transport, the price of fuel, the shortage of empty containers or the problems of co-determination in some ports set the tone for the rise in freight rates.The latest data published by the RWI/ISL for June, produced by the Leibniz Institute for Economic Research, once again shows the strength of demand for container transport with an increase in port traffic in the main ports of the world. This new record only continues the upward trend that began in January and which, despite a certain stability during the months of February and March, showed an intense recovery in the following months. This behaviour has been marked by the relaxation of restrictive measures because of Covid-19 which, in combination with the preventive actions established by the different countries and institutions, has strongly boosted demand in Europe, thus contributing to greater container traffic. 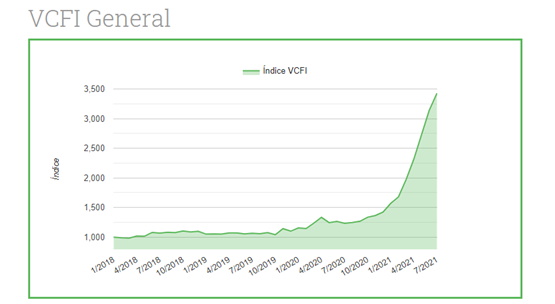 On the other hand, according to Alphaliner’s data, the fleet idle in mid-July for strictly commercial reasons remains at a minimum level, mainly due to the increase in demand. Thus, 51 vessels are idle, with a total of 161,821 TEUs, representing 0.7% of the total active fleet and showing a slight decrease from the 0.8% at the end of June, when it stood at 187,099 TEUs.

As for the analysis of the different geographical areas, it is worth noting that except for the Eastern Mediterranean (-1.94%), the rest of the areas follow the same trend and experience an increase in shipping prices. In this sense, the greatest increase takes place in export freight rates with the different areas belonging to the American continent, as all of them reach growth rates of more than 5%. Specifically, Latin America Pacific (24.87%) represents the highest increase, followed by Central America and the Caribbean (14.54%) and the United States and Canada (7.48%). Beyond the factors common to all areas, such as the shortage of capacity and equipment, the strong demand for manufactured goods from the United States and the congestion problems in some of its ports have made the difference. To this, it is necessary to add that export traffic from Valenciaport with the United States shows a strong upward trend, standing at levels well above those of the same period in 2019 and 2020.

On the other hand, the Western Mediterranean sub-index for July continues on the growth path started in December 2020 and has now risen for 8 consecutive months. In July, the Western Mediterranean VCFI increased by 6.23%, reaching 1,978.41 points. However, the average growth rate for the months of December 2020 to July 2021 is close to 10%. It seems clear that common factors are pushing up freight rates in this area, but it is also worth noting that the traffics with Morocco and Algeria from Valenciaport are performing well. 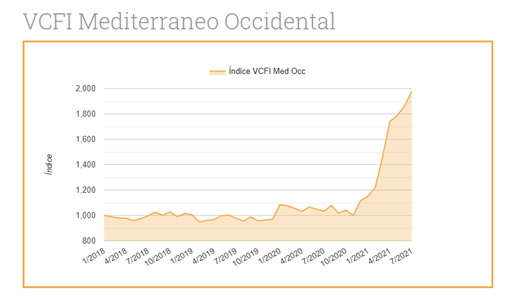 As for the Far East sub-index, in July it has now risen for three consecutive months and grew by 6.71% to 3,704.82 points. One factor that may be influencing the lower intensity of the growth rates between Valenciaport’s freight rates and this area may be the increase in container capacity on the ships that cover this route. Thus, according to Alphaliner, in July, the trade route between the Far East and Europe continues to be the largest in terms of fleet deployment, since 21.5% of the total number of container ships (5.25 million TEUs) is located here. This represents an increase in capacity of 19.7% compared to July 2020. 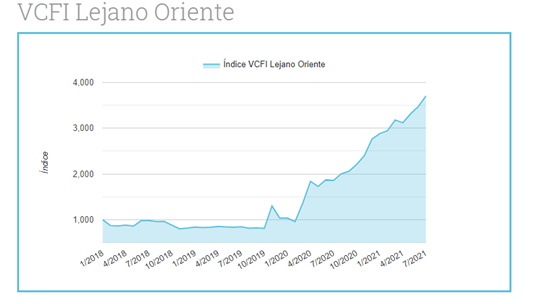 For the full report, please click on the following link

The president of the Port Authority of Valencia (PAV), Aurelio Martínez, at an event held by the Asociación Empresarial Polígonos Riba-roja A-3, referred to the difficulties caused by the lack of containers and congestion at the ports of Los Angeles and Long Beach for the thousands of exporting and importing companies that use the Valenciaport terminals every day.

Martínez explained that the increase in demand for products from the USA, due to its government’s consumption incentive policies, has led to an increase in imports to North America, causing a collapse of ships which is affecting international maritime traffic. Demand is rising and so are containers, causing a shortage of empty containers, but the infrastructure remains the same. This means that ships have to wait up to three weeks to unload and the companies have to reverse these costs in the price of freight, which has risen considerably in recent months. A stabilisation that will not arrive until the end of 2022, according to the forecasts of the president of the Port Authority, who has recognised that the situation has caused a collapse in the logistics chain.

Faced with this new panorama, he reiterated the need to expand the infrastructures of ports such as Valencia with the forecast that the future of maritime transport will pass through “a few powerful port hubs”, among which Valencia is to be placed. Hence the need to be able to carry out projects such as the terminals of the northern extension, the start-up of the ZAL (which has been at a standstill for 27 years) or a northern access to the port to avoid the current congestion of lorries on the V-21 and V-30″.

The President of the PAV emphasised that these improvements will help to reduce the carbon footprint of maritime transport. In fact, he stressed that one of the fundamental lines of the Port of Valencia’s strategy for the coming years is sustainability and innovation with an agenda 2030 that aims to achieve port facilities that generate all the energy they consume thanks to the installation of solar panels and a wind farm. Efficiency, with a firm commitment to digitalisation, or the improvement of port-city integration are other strategic lines of the project led by Aurelio Martínez.
Source: Port of Valencia