Following a guided tour of the offices where they met with some of the 170 executives based in the company headquarters, they were shown how digital projects developed by the teams in Marseille will help transform the way CEVA operates. 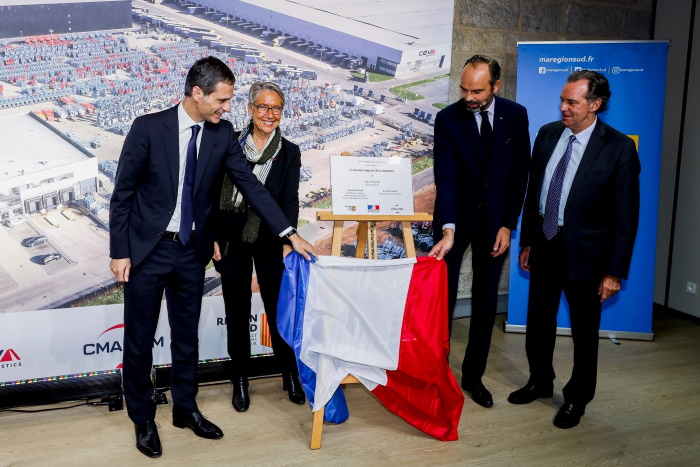 Amongst the many digital transformation projects developed in Marseille, the Prime Minister was shown a digital platform that will display the carbon footprint of customer supply chains by mode of transportation. The platform, developed in partnership with startups housed in ZEBOX, the incubator created by Rodolphe Saadé, will leverage the efficiency of delivery options in the best interests of customers and the environment. The collaboration with Wing, a young French company, offering new urban logistics solutions for e-Merchants, was also discussed.

In his speech, the Prime Minister highlighted the role of the logistics sector, “Our country does not sufficiently understand the importance of the supply chain, the importance of well-organized flows. I think we must defend this sector which represents a lot of jobs, strategic and economic issues, especially for a city and a port like Marseille. Intelligence in logistics is at the heart of tomorrow’s economic development.”

The Region “Sud” confirmed its full support of CEVA Logistics by announcing 1.5 million Euros for digital development of innovative projects aimed at transforming the customer experience.

With its new location in France, CEVA Logistics will bring additional capacities to the country’s economic development. Locally-based companies will additionally benefit from CEVA’s knowhow and presence across 800 locations worldwide

During the event, Nicolas Sartini CEVA’s CEO said: “It’s an honor to welcome the Prime Minister and have him officially open our new global headquarters. These offices are at the heart of everything we are doing and the teams based here play a pivotal role in CEVA’s future. We are delighted to have been able to showcase some of the new technology projects being developed that will fundamentally change how we operate.”
Source: CEVA Logistics