From Wyoming to Australia, Coal’s Heartlands Are Retreating

From the Rocky Mountains to the Rhineland and Australia’s Great Dividing Range, the great tide of the coal industry is receding.

The entire Powder River Basin, the region spanning the states of Montana and Wyoming that provides about half of America’s thermal coal, is “distressed,” Moody’s Investors Service wrote in a report last week. All companies producing coal there are now focusing on mining coking coal elsewhere in the U.S., the ratings company wrote. Output “will likely fall significantly in 2020,” it said. 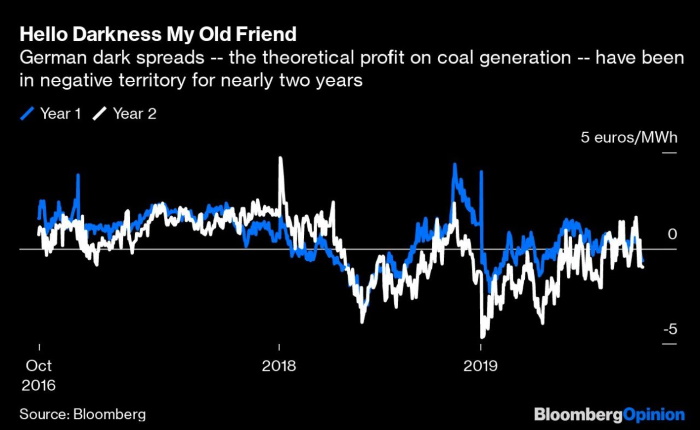 Energy Information Administration forecasts quoted by Moody’s suggest that production from the Powder River-dominated Western Region will drop to 339 million short tons in 2020 from 418 million short tons in 2018, a 19% reduction and a 42% decline from 592 million short tons in 2010. Most of that decline happened while coal could still produce electricity more cheaply than renewable alternatives, a situation that’s now reversed. A comparable drop over the coming decade would shutter almost every mine in the basin.

In Australia, the world’s second-largest coal exporter after Indonesia, similar trends are afoot. The pipeline of new renewables projects, led by solar farms, now stands at 133 gigawatts, according to research group Rystad Energy. Coupled with a flood of energy-storage projects coming online by 2025, that means that coal-fired generation could be extinct by 2040, the group said Tuesday.

Changes under way in Europe are pointing in the same direction. Germany, long considered one of the rich world’s last redoubts of coal-fired power, is seeing generation plummet as the rising price of carbon credits and falling cost of gas squeeze out profits for generators. Germany’s current-year and next-year dark spreads, which represent the theoretical profit for coal-fired power based on prevailing fuel, electricity and carbon prices, have been in negative territory for much of the year.

Generators RWE AG and Uniper SE are still able to eke out margins by utilizing carbon credits bought in former years when prices were in the region of 5 euros ($5.57) compared to their current 25.93 euros. Eventually, that stockpile will run out. Unless gas gets more expensive or carbon gets cheaper, the German government’s target for ending coal-fired generation by 2038 is likely to come 15 years or so early.

Remarkably, this trend is even sweeping up brown coal, or lignite, a cheap-and-dirty variety that’s been seen as more resilient than Germany’s costlier black coal. Lignite generation in the six months through June fell 28% from a year earlier at RWE, a drop of 9.9 terawatt-hours.

Even regions that were once viewed as the last hopes for coal demand are looking dicier. The pipeline of thermal power projects under construction in Southeast Asia has fallen to zero this year everywhere except in Indonesia. Even there, the capacity being built is just 1,500 megawatts, equivalent to just five or six power plants, according to a report published Wednesday by Global Energy Monitor, a research group in favor of fossil fuel phase-out.

The world has gone through a remarkable energy transition over the past decade, but much of the shift still lies, iceberg-like, beneath the surface. Renewables are cheaper than coal almost everywhere, a prospect that was considered so improbable at the time of the 2006 Stern Review on climate change that it wasn’t treated as a serious possibility beyond a vague hope that research and development might one day flip the script.

The great hope for coal now is not that it will be able to survive in the free market, but that government support will come in to bail out an industry that can’t survive on its own, in the process locking in pollution-related disease and climate emissions for future generations. 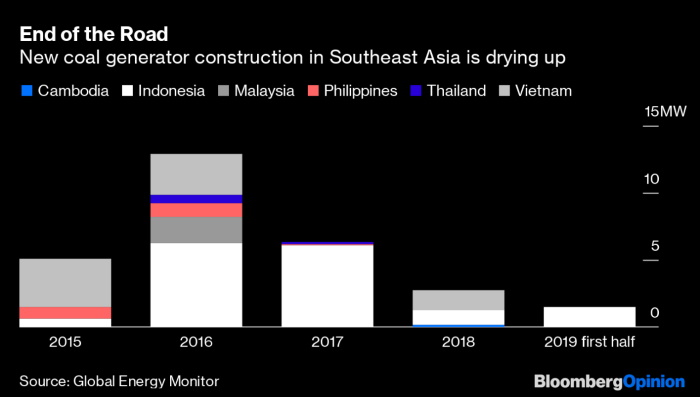 It’s not impossible that this bet will work in a few regions — as exemplified by the speech given last week to China’s National Energy Commission by Li Keqiang, in which the premier sang the praises of domestic coal deposits and stepped back from previous promises to accelerate deployment of renewables.

Any industry that harms its consumers, pollutes the planet and depends for its survival on political support is living on borrowed time, though. The declines to coal-fired power on multiple continents are the death throes of a technology that’s rapidly heading towards obsolescence. Humanity will still struggle to reduce our emissions fast enough to avoid devastating climate change — but don’t be surprised if this industry falls even faster than people have dared to hope.
Source: Bloomberg