This year so far has been full of events which have affected many global markets, including the bunker market. While the spread of Covid-19 reduced crude oil demand, the production cuts changed not only the supply of crude oil but also its composition. As a result and driven by the changes in pricing, some refiners started to purchase more light crude yielding little residual output, which goes into HSFO and VLSFO production. Bunker prices have already reacted, particularly in ARA, where the HSFO and VLSFO discount to other ports seems to be narrowing giving suppliers in other locations a chance to compete on the price.

OPEC+ cuts affecting fuel oil supply Crude oil demand fell sharply on the back of the Covid-19 lockdowns and prices followed, at some point down to low teens. For many oil producing states such low prices were a major blow to the budget so to rescue the situation the OPEC+ countries cut production with the majority of these cuts being for medium and heavy crudes, rich in fuel oil. Elsewhere, medium and heavy crude oil production fell naturally, while the production of light crude dropped less significantly changing the global crude oil composition. Crude oil prices reacted accordingly.

A good example is Russian URALS (which is a medium grade) that is now selling to North West Europe (NWE) at a significant premium over Brent (Figure 1). 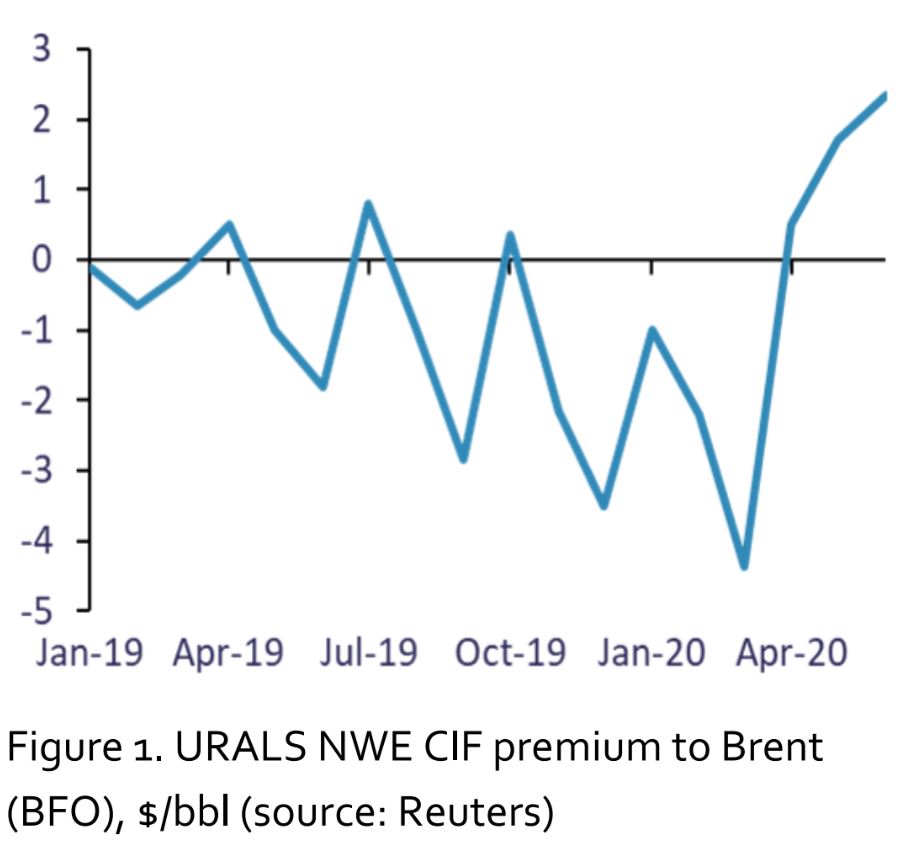 Paying more for crude affects refining margins, so some refiners in North West Europe started to purchase more light crude from the US and West Africa and subsequently produce less fuel oil.

The shortage of fuel oil is already visible in bunker pricing in ARA and in an increase in imports. While Russia remains the main supplier into the region, a number of rare fuel oil cargoes are expected to arrive from the Americas.

The tight fuel oil supply is affecting ARA bunker prices, particularly for HSFO which have recently increased and are now at parity with the other hubs (Figure 2) . While HSFO constitutes a small proportion of the global bunker demand, there is evidence that VLSFO prices are also affected, although to a smaller extent. 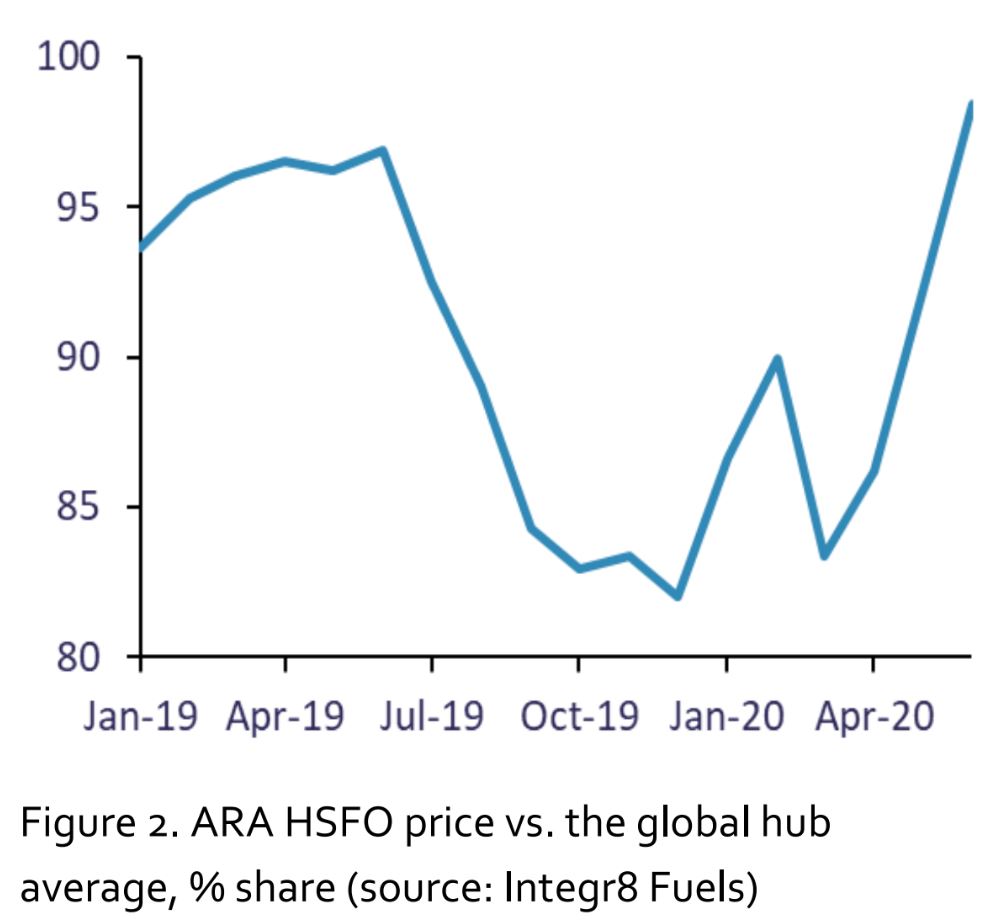 The reason for VLSFO being less affected is that generally it is a blended product meaning many different streams go into production. These could be residual, distillate and others. However, when residual components become relatively more expensive, some producers may start looking for cheaper alternatives with the potential impact on quality and an increase in off-specs.

The ARA fuel oil tightness also means owners may have to pay more in relative terms for their bunkers. Figure 3 shows the narrowing discount for residual bunker fuels in ARA compared with some other and often competing ports.

The HSFO discount to Gibraltar and Las Palmas more than halved between May and early July. The VLSFO discount has also declined.

The table shows the average prices which do not reflect the variance between suppliers meaning that should this trend continue, there is a higher likelihood of suppliers elsewhere potentially able to offer competitive prices vs. ARA. Previously, for vessels going to a port in ARA the bunker buyer would not normally consider bunkering elsewhere (unless for operational reasons), however currently we recommend checking the price in alternative ports.

Fuel oil tightness expected to reverse longer-term While it is possible that the current fuel oil tightness lasts for a number of months, the expectation is that it may reverse afterwards. As OPEC+ is expected to gradually reduce the crude oil cuts pushing more medium and heavy crudes to the market, the US light crude oil production may see further declines given the sharp contraction in new oil well drilling. 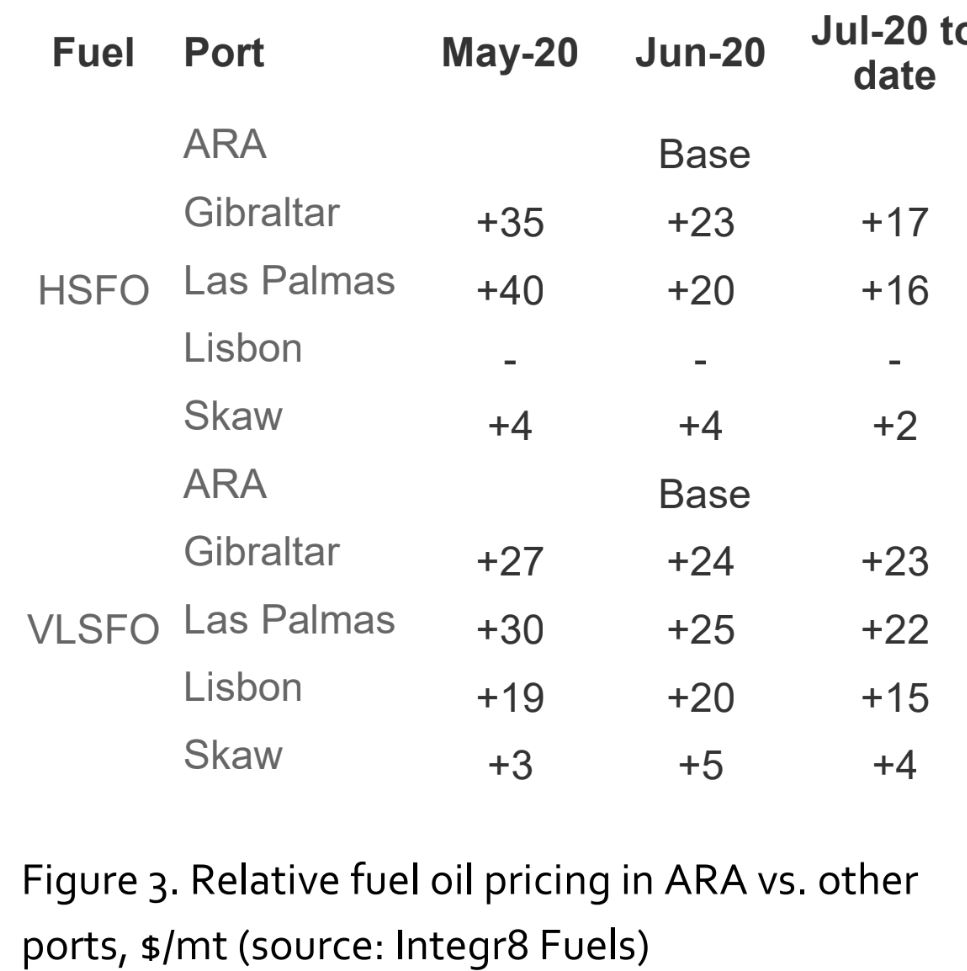 Therefore, it is likely that in the near term fuel oil tightness may occur in other locations, just like it is happening in ARA, so keeping an eye on pricing and being open-minded about where to bunker can save shipowners money.
Source: Integr8 Fuels