Nowadays, governments, companies and communities are struggling with one huge problem, which is the necessity of reducing emissions of huge pollutants and precursors such as NOx, CO2, Particulate matter (PM) and SOx to the atmosphere.

Among these gases, it is important to refer to NOx. When nitrogen is released during fuel combustion it combines with oxygen atoms to create nitric oxide (NO). This further combines with oxygen to create nitrogen dioxide (NO2), which can be hazardous to health at typical ambient concentrations. Fuel NO can contribute for as much as 50% of total emissions through oil combustion and as much as 80% through the combustion of coal. Nitrogen dioxide and nitric oxide are referred together as oxides of nitrogen (NOx). NOx gases tend to react with other pollutants to form smog and acid rain as well as being central to the formation of fine particles (PM) and ground-level ozone, both of which are associated with hazardous health effects.

Recent official data reported to the European Environment Agency (EEA), indicated that 12 European Member States exceeded one or more of the emissions limits set by the EU National Emissions Ceilings (NEC) Directive. In some instances, the limits were exceeded by significant amounts and the pollutant for which most occurrences were registered as NOx. The European Commission established harsh actions against any Member State in case of non-compliance with the limit values throughout its territory. The major objective is that the annual average is no greater than 40 µg/m3.

NOx gases can have many origins, being the most significant from industrial processes and energy use in industry, road and non-road-transportations and commercial, and finally institutional buildings and households. It is more relevant than ever to mention that it is fundamental to properly know the fuel that is being burned and that it’s also relevant to obtain processes efficient enough to reduce the emissions caused during combustion, without decreasing the quality of ignition and fuel properties. 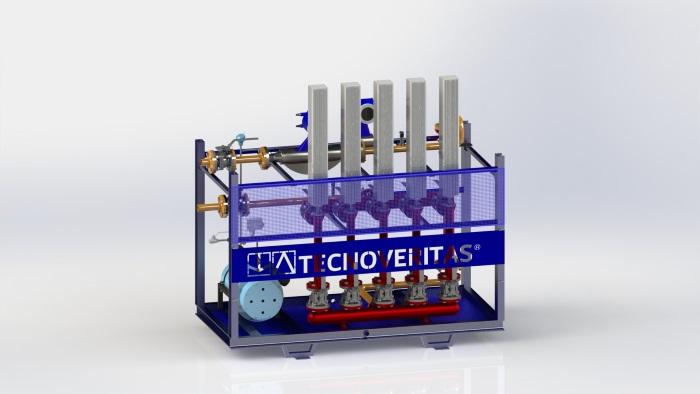 What if there was a solution that would not only allow to reduce emissions but also to save money at the same time while maintaining the desired characteristics of fuel? This is possible with Enermulsion, a patented ultrasonic cavitation technology developed by TecnoVeritas.

Enermulsion is an automated inline system that can be installed on any industrial station, not requiring it to interrupt its engine operation, having the possibility to adapt to the unit engine load. The process comprises a fuel conditioning equipment, which is based on ultrasound technology. It is prepared to work with heavy types of fuel such as Heavy Fuel Oil (HFO) which is largely used for powering industrial plants and building heat, but also lighter fuels such as IFO (Intermediate fuel oil) and LFO (Light Fuel Oil). The problem associated with the combustion of HFO is the production and release of gaseous pollutants (flue gas emissions).

Enermulsion processes fuel and water, producing a very stable and engine load optimized water-in-fuel emulsion. Through ultrasound technology and due to cavitation, the thermionic decomposition of water molecules and cracking of hydrocarbon structures occurs, resulting in a stable fuel homogenization without requiring to use any additional emulsifier. The fuel treatment takes place in contact with an ultrasound titanium sonotrode, inside the cavitation chamber. The sonotrode is placed in resonance at about 20 kHz with an amplitude that can change from 50 to 100%.

This fuel emulsion, when burned in the engines, results in a higher quality ignition (improving the performance of combustion), without any significant changes in the desired fuel properties (thermal, physical and chemical). One big advantage of the process is the fact that it allows to significantly reduce the emissions of the fuel, attaining a NOx reduction of up to 30%, but also a reduction of up to 80% of Particulate Matter. The decrease in NOx emissions is due to a mechanism called the Zeldovich Mechanism, which explains the suppression of the thermal oxidation of nitrogen. The combustion becomes a much cleaner operation, which can be easily visualized by the state of the engine. Besides the environmental factor, this can also result in a significant impact for the user since the maintenance costs decrease and the equipment is proven cleaner than when burning unemulsified HFO.

Another interesting fact about this water-in-fuel emulsion is that it allows obtaining fuel savings that may go up 7%. This fact is related to improved combustion associated with the shorter hydrocarbon molecules with OH radicals, the increase of the turbocharger efficiency as well as to the air entrance in the fine spray layer formed due to an increase of momentum and penetrating force. These fuel savings represent a more economical gain to its user.

Due to the market necessity of having the right tool to face the worldwide legislation, this process can certainly be an asset in terms of raising the value to fuel at the same time as helping to achieve the levels of pollutants to legal impositions.
Source: TecnoVeritas

Previous: Air Pollution in Shipping: The Further Reduction of SO2 Emissions 2020
Next: Dry Bulk Market: Scrapping of Older Ships A One-Way Street To Shipping’s Recovery