Oil product stockpiles at the UAE’s Port of Fujairah saw the highest drop on record in the week to Nov. 22 as light distillates such as naphtha posted the biggest decline in a year, according to Nov. 24 data from the Fujairah Oil Industry Zone (FOIZ) provided exclusively to S&P Global Platts. 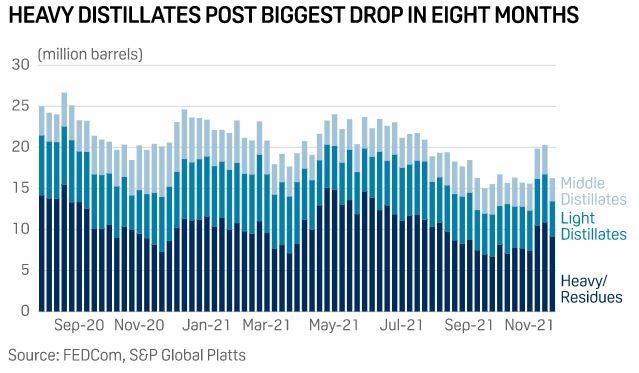 Fuel oil exports from Fujairah were at a record 4.12 million barrels in the week started Nov. 15, with shipments headed for Singapore, China, Madagascar and Pakistan, according to Kpler data.

“It makes more economic sense for Middle Eastern suppliers to ship arbitrage cargoes to Singapore than Fujairah at the moment due to stronger cargo values and downstream bunker prices,” a Fujairah-based bunker supplier said.

Traders said overall bunker demand at Fujairah is slower than it was in October, when sales reached a high for the year, according to FOIZ data. Low sulfur fuel oil inquiries showed “good volumes” in recent days, “so most suppliers have limited barge availability for prompt bunker deliveries,” a Fujairah-based bunker supplier said.

The delivered marine fuel 0.5%S bunker fuel for Singapore was at a premium of $5/mt against Fujairah on Nov. 23, after trading at a discount between Oct. 20 and Nov. 17, Platts data showed.

Some 750,000 barrels of naphtha were set to be exported from Fujairah for the week started Nov. 15, almost double from the week before, with traders sending the petrochemicals feedstock to South Korea, Japan and India, the first such shipment to India since February, according to the Kpler data. Kuwait Petroleum Corp. was seeking 35,000 mt of 91 RON gasoline for delivery to Mina al-Ahmadi over Dec. 1-2 in a tender that closed Nov. 23, Platts reported earlier.

Total inventories are down 20.45% on the year, led by a 52.67% decline in middle distillates. Light distillates have fallen 32.31% while heavy distillates were up 12.23% over the same period.
Source:Platts