Tanker owners are looking for insights as to the degree and the pace that the global economy will transition towards cleaner fuels, in order to get make informed strategic decisions. As such, the upcoming UN climate summit is of significant importance. In its latest weekly report, shipbroker Gibsons said that “the International Energy Agency (IEA) released last week its annual World Energy Outlook, ahead of the upcoming UN climate summit, COP26 in Glasgow. The agency notes that national level commitments to reduce global emissions are now at their highest level ever. By now, more than 50 countries, as well as the entire European Union, have pledged to net zero emissions. However, the IEA makes it clear that much more needs to be done beyond currently announced pledges to meet the targets set by the Paris Agreement. The agency calculates that overall clean energy investment would need to more than triple to keep the door open to a 1.5 °C stabilization”. 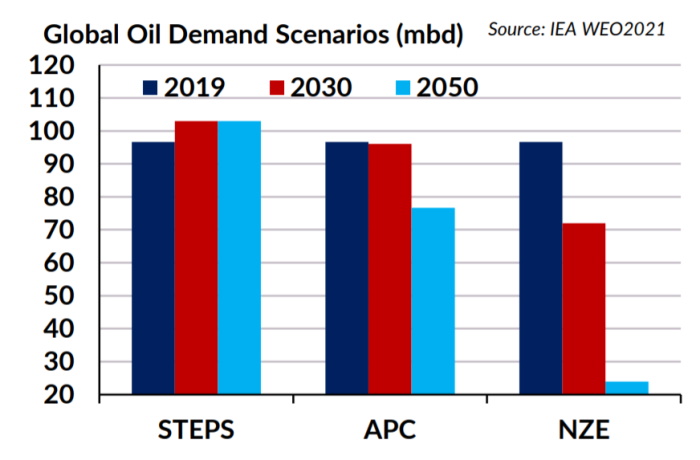 According to Gibson, “the report introduces three key scenarios. The Announced Pledges Scenario (APS) takes into account all of the climate commitments made by national governments by mid-2021 and assumes these pledges are met in full and on time. In this case, world oil demand peaks soon after 2025 at 97 mbd amid rapid growth in electric vehicle sales and continued improvements in fuel efficiency. Oil use falls by around 4 mbd in countries with net zero pledges between 2020 and 2030, but that is offset by an 8 mbd increase in the rest of the world. By 2050, global demand falls to 77 mbd. However, the IEA stresses that a lot more needs to be done by governments to be able to fully deliver on their announced pledges. On the supply side, the APS assumes that producers with net zero pledges continue to pursue efforts to minimize emissions. This increases their production and financing costs; yet some remain competitive due to ability to export more when faced with the declining domestic demand. For example, the US exports 3.5 mbd of oil in the APS in 2030, that’s compared to 2.5 mbd of oil in the more conservative STEPS scenario, detailed below”.

“The Stated Policies Scenario (STEPS) is based on prevailing policy settings, in other words measures that governments have actually put in place, as well as specific policy initiatives that are under development, including the “Fit for 55” initiative in the EU. In this case demand peaks in mid-2030 at around 104 mbd and then falls slightly by 2050. Here, US shale operators choose to prioritize returns over production growth, and tight oil satisfies much less of the increase in global oil demand than in the past. OPEC production increases by around 6 mbd to 2030, and Russian production is maintained”, Gibson noted.

“Finally, the Net Zero Emissions by 2050 (NZE) case is hypothetical. It is designed to achieve a specific outcome and shows a pathway to reach it. This case sets out an action plan for the next ten years in order to reach net zero CO2 emissions by 2050. In the NZE, oil demand falls to 72 mbd in 2030 and to 24 mbd by 2050. By 2030, 60% of all passenger cars sold globally are electric, and no new internal combustion engine cars are sold anywhere after 2035. Oil use as a petrochemical feedstock is the only area to see an increase in demand; in 2050, 55% of all oil consumed globally is for petrochemicals”, the shipbroker noted.

Gibson concluded that “the IEA’s latest energy outlook should not be viewed as a specific forecast but rather as a set of possible pathways of how the energy markets could evolve in decades to come. Of all the cases, the STEPS is the closest to current reality, but even this case does not fully overcome some challenges, for example the uptake of EVs in developing economies. The upcoming COP26 will provide insights in to how much political will is out there to act, particularly from non-OECD economies, which have been hit hard by the pandemic. With the conference commencing in less than ten days, all eyes on Glasgow!”.
Nikos Roussanoglou, Hellenic Shipping News Worldwide

Previous: Dry Bulk Market: Capesize Market Comes Under Pressure
Next: The only way is up: corporate chiefs warn on prices