Dollar positions balanced out before recovery
As discussed in our latest positioning note, we have been waiting for evidence that the dollar positioning had shifted to a less pronounced overbought condition. Latest CFTC data published on Friday clearly show signs of this dynamic in the week ending 18 January.

The aggregate dollar positioning versus reported G10 currencies (i.e. G9 excluding NOK and SEK) shrank by approximately 4% of open interest, moving quite close to its 5-year average. That corroborates our view that the dollar’s weakness at the start of the year was largely due to some position-squaring/profit-taking events around two major data releases (the nonfarm payrolls and the inflation report), rather than a structural shift away from bullish dollar sentiment. The more balanced positioning likely allowed some of those lost dollar longs to be built up again in the past week, as the dollar recovered across the board.

Looking ahead, the lack of indication that the dollar net-long positioning is overstretched suggests that there is room for a further build-up in USD long positions into the start of Fed tightening cycle, which is historically a period where the greenback is well supported. More on our dollar view in the January edition of FX Talking.

GBP wipes out net-shorts on hawkish BoE bets
The most remarkable change in positioning since the start of the year was registered in the pound. GBP/USD net positions moved from a 2-year low (-28% of open interest) on 21 December to a fully balanced positioning in the latest 18 January read.

Along with the generalised soft dollar environment, the considerable rise in Bank of England rate expectations after the December rate hike was the major driver behind the big GBP short-squeeze. While arguably a close call, we don’t think the BoE will disappoint markets next week, delivering a fully priced-in 25-bp hike.

It’s also important to note the complete absence of any political risk premium related to either the PM Boris Johnson “party-gate” saga or the forthcoming rounds of EU-UK post-Brexit negotiations. Given the reluctance to embed these factors in the currency, we think the pound can see another build-up of net-long positions in the near term, thanks to the support provided by the market’s hawkish BoE pricing. 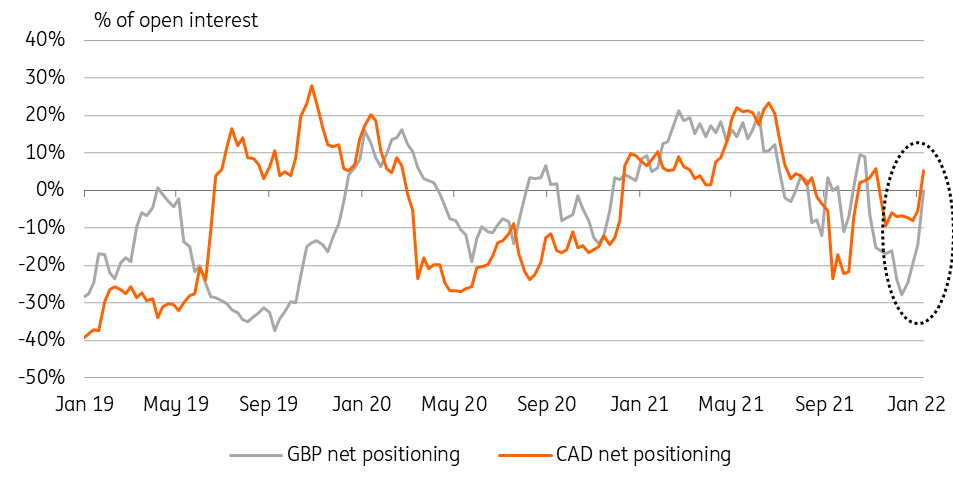 CAD boosted by oil rally
Albeit not as marked as the jump in GBP positions, the Canadian dollar also experienced a quite significant short-squeeze in January, moving back to neutral/slightly overbought territory. CAD is also being supported by expectations around a domestic tightening cycle – which we expect to start as early as this week – but oil was surely a key driver of currency strength at the start of the year.

While we do not have CFTC data for NOK, we believe that the oil rally that led Brent back into the 85-90$/bll region has had a similar effect on the krone’s positioning, which should now be quite balanced.

In the rest of G10, EUR/USD saw a 2.6% (of open interest) increase in its net-positioning gauge, not enough to be considered as overbought for now. The other low-yielders (JPY and CHF) saw an opposite move, dropping deeper into oversold territory. AUD and NZD positioning were not particularly changed, with the former remaining the biggest G10 short.
Source: ING

Germany could receive LNG from Qatar as early as 2024, sheikh tells Handelsblatt