Fireworks on the way
Growing fears that central banks will have to push ahead with tightening even as the economy slows are triggering widespread expectations of recession. In financial markets, these fears are being played out in flat or inverted yield curves and now a fall in commodities as demand destruction is seen outweighing the early-year supply shocks from the war in Ukraine.

In FX, recession fears are starting to take their toll more broadly on the pro-cyclical currencies, including the euro. And with the Fed showing no signs, as yet, of a pivot away from front-loaded tightening, the dollar has pushed to twenty-year highs. EUR/USD has broken to a new cycle low – now within two big figures of parity.

Psychological levels play a major role in FX markets – and no doubt amongst policymakers and the electorate alike. Just look at the way USD/CHF fell 5% within a week of touching highs of 1.00 both in May and June. Equally big psychological levels play a major role in the FX options market, where barriers or triggers can effectively either nullify or bring to life option structures once a particular level is hit.

One example here could be a speculator wanting to position for a lower EUR/USD, but wanting to cheapen the structure by having a ‘Knock-out’ at 1.00. Should 1.00 trade, the speculator’s position evaporates and questions whether he/she wants to re-apply bearish EUR/USD strategies down at these levels. Were 1.00 to break we would expect volatility to pick up sharply and most likely EUR/USD to gap lower.

How low could EUR/USD go over the next four weeks? Here we look at the FX option markets for expected ranges. Based on the current pricing of EUR/USD implied volatility, a one standard deviation move could see EUR/USD as low as 0.9873, while perhaps a worst case, two standard deviation outcome could see EUR/USD as low as 0.9545.

What combination of risk sentiment and monetary policy could send EUR/USD below parity?
In our short-term fair value model, we use rates and equity factors to estimate at what level EUR/USD should be trading on a daily basis. Our calculations show that the large majority of EUR/USD moves can be explained by a combination of moves in global risk sentiment, gauged by the performance of the MSCI World Index, and the 2-year EUR-USD swap spread, which mirrors the Fed-ECB policy differential.

When taking only these two factors into account – i.e. assuming other variables remain unchanged – we can estimate where EUR/USD will trade based on risk sentiment and monetary policy dynamics (table below). 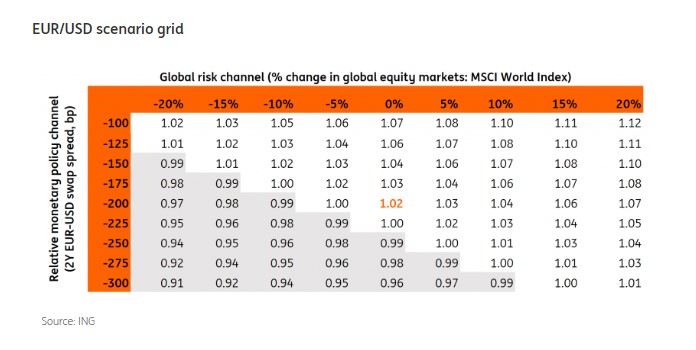 The bottom-left grey area shows under what circumstances we could see EUR/USD trade below parity in the near term. Even assuming that markets price in/out the same amount of tightening off the Fed and the ECB curves – so that the 2Y EUR-USD swap rates remains around the current 200bp – a further drop in global equities by 10% (not an extreme scenario given growing recession fears) would be sufficient to bring EUR/USD below 1.00.

Alternatively, a stabilisation in global risk sentiment would mean that EUR/USD should hold above parity unless more ECB tightening is priced out of the swap curve (possibly due to a further deteriorating EZ growth outlook) while markets remain confident on the Fed’s policy path, ultimately causing a further widening (of at least 40-50bp) in the 2Y swap rate differential.

A more realistic scenario could see a more moderate widening in the Fed-ECB policy differential (25bp in the 2Y swap spread) as markets price one hike off the ECB rate path and a relatively contained drop in equities (-5%) from current levels. That combination would also be sufficient to press EUR/USD below parity, according to our calculations.

Speculators have room to add to EUR/USD short positions
Big players in FX markets are speculators such as macro hedge funds and Commodity Trading Advisers (CTAs). This latter community is very much driven by momentum and EUR/USD breaking out of long-standing ranges to the downside will now doubt have triggered some sell signals. But is this community short EUR/USD already?

The answer, looking at recent speculative positioning in Chicago, is no. Our chart below suggests that speculators (somewhat surprisingly) only have very modest EUR/USD short positions on board and are nowhere near as short as they were during Trump’s trade war in 2019 or back in 2015.

Positioning looks no impediment to a further move lower in EUR/USD. 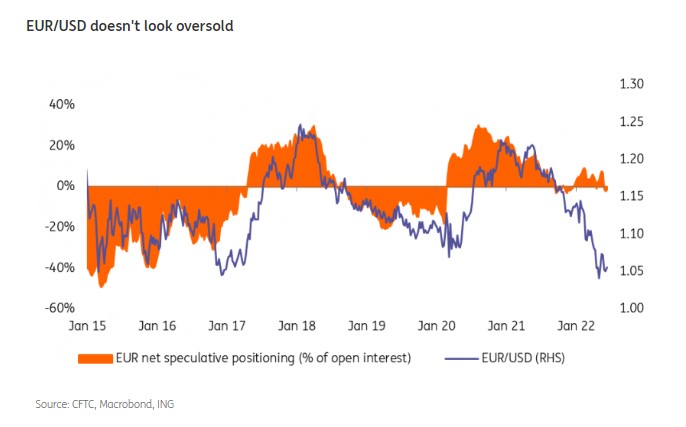 Will central bankers have a say?
The central bank community will struggle to argue that the move lower in EUR/USD is unjustified. Europe is suffering an enormous negative terms of trade shock from energy and as we have discussed over recent months, our own medium term fair value estimates of EUR/USD have fallen and suggest that, even at parity, EUR/USD is not extremely cheap.

No doubt the European Central Bank (ECB) will be quite concerned by the move – especially if it develops into a ‘sell the Eurozone’ mentality. Of note benchmark equity indices are off 11% in the Eurozone over the last month compared to 7% in the US.

Yet faced with the looming risk of recession – and the euro being a pro-cyclical currency – the ECB’s hands may be tied in its ability to threaten more aggressive rate hikes in defence of the euro. We will hear more on this issue from our Eurozone macro team shortly.

From the US side, surely it is far too early to speculate on some kind of 1985 Plaza-style accord to weaken the dollar. G7 policymakers will only be able to agree on this when the Fed sees it has inflation under control. A reversal like this would require the Fed to be easing policy before any co-ordinated G7 FX intervention is seen to weaken the dollar. That looks like a story for at least six months away.
Source: ING