In the first quarter of 2022, gross domestic product (GDP) in the G20 area rose by 0.7% quarter-on-quarter according to provisional estimates, down from the 1.3% increase recorded in the fourth quarter of 2021.

The slowdown in the G20 area in Q1 2022 mainly reflects weaker performance in the United States,1 where GDP contracted by 0.4% quarter-on-quarter after rising by 1.7% in Q4 2021. This was mainly due to changes in net trade (exports minus imports) and decreases in inventory investment (destocking) and in government spending on COVID-19 assistance.

In Australia and Indonesia, growth slowed by more than 2 percentage points between Q4 2021 and Q1 2022. Growth slowed to a lesser extent in Canada, China, India, Italy, Korea, Turkey andthe United Kingdom in Q1 2022, while in France and Japan there were GDP contractions of 0.2% and 0.1% respectively. 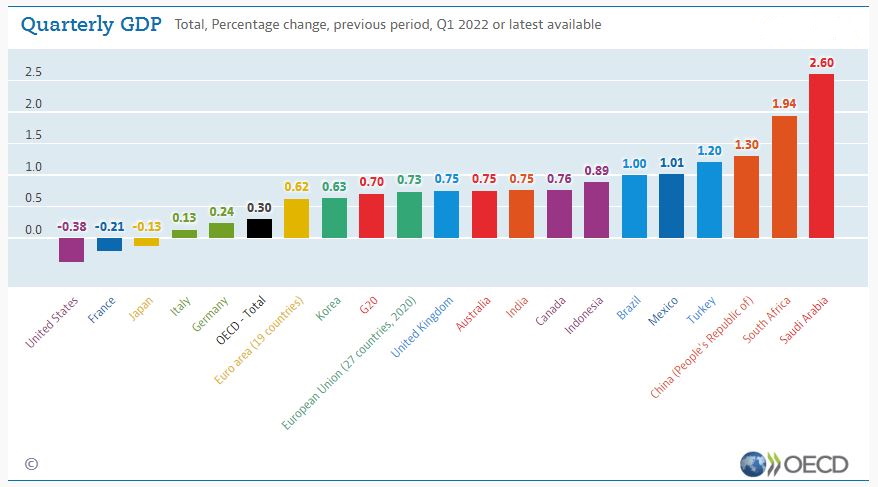 Despite the trend for the G20 area as a whole, Brazil, Germany, Mexico, Saudi Arabia, South Africa and the European Union as a whole recorded stronger growth in Q1 2022 than in Q4 2021. Growth in Saudi Arabia (2.6%) was the highest among G20 economies, driven by a marked increase in oil activities. 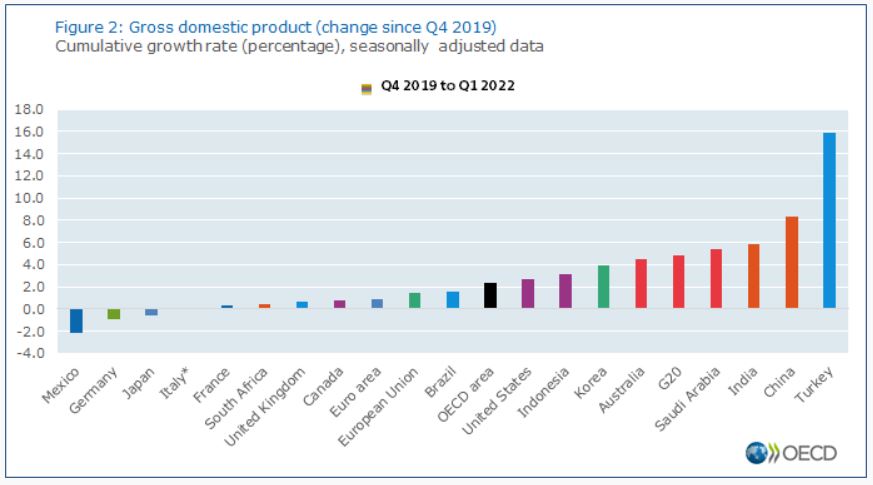 In the OECD area, which comprises 38 countries including a dozen G20 countries, GDP growth is now estimated at 0.3% in Q1 2022. This figure has been revised from 0.1% growth estimated three weeks ago2 based on countries’ preliminary GDP releases. Since then, among G7 countries, GDP quarter-on-quarter growth in Q1 2022 has been revised upwards in Italy and Japan and downwards in Canada and France. Also, Ireland has published its Q1 2022 GDP growth estimate, which has added almost 0.1 percentage points to OECD area GDP growth.3