On 15 March 2021 Sovcomflot and Shell broke new ground, with the completion of the first ever Aframax tanker fuelling using LNG in the USA.

Sovcomflot’s Gagarin Prospect, on long-term charter to Shell, was en-route from Corpus Christi to Europe. She received 1,075 cubic metres of marine LNG from the Shell NA LNG LLC chartered Q-LNG 4000 outside the Port of Canaveral, Florida. This represented the first ever ship-to-ship LNG fuelling of a large capacity Aframax tanker in the USA.

This event demonstrates the rapid expansion of LNG bunkering infrastructure globally. The deviation from the vessel’s usual voyage route amounted to less than 150 nautical miles (0.5 days) and the bunkering time was 11 hours. LNG can now be supplied ship-to-ship on the principal transatlantic tanker trade routes between Europe and the US Gulf, and the US Gulf and East Coast Canada, which has seen traffic increasing rapidly as a result of the growth in WTI crude exports from the US Gulf. 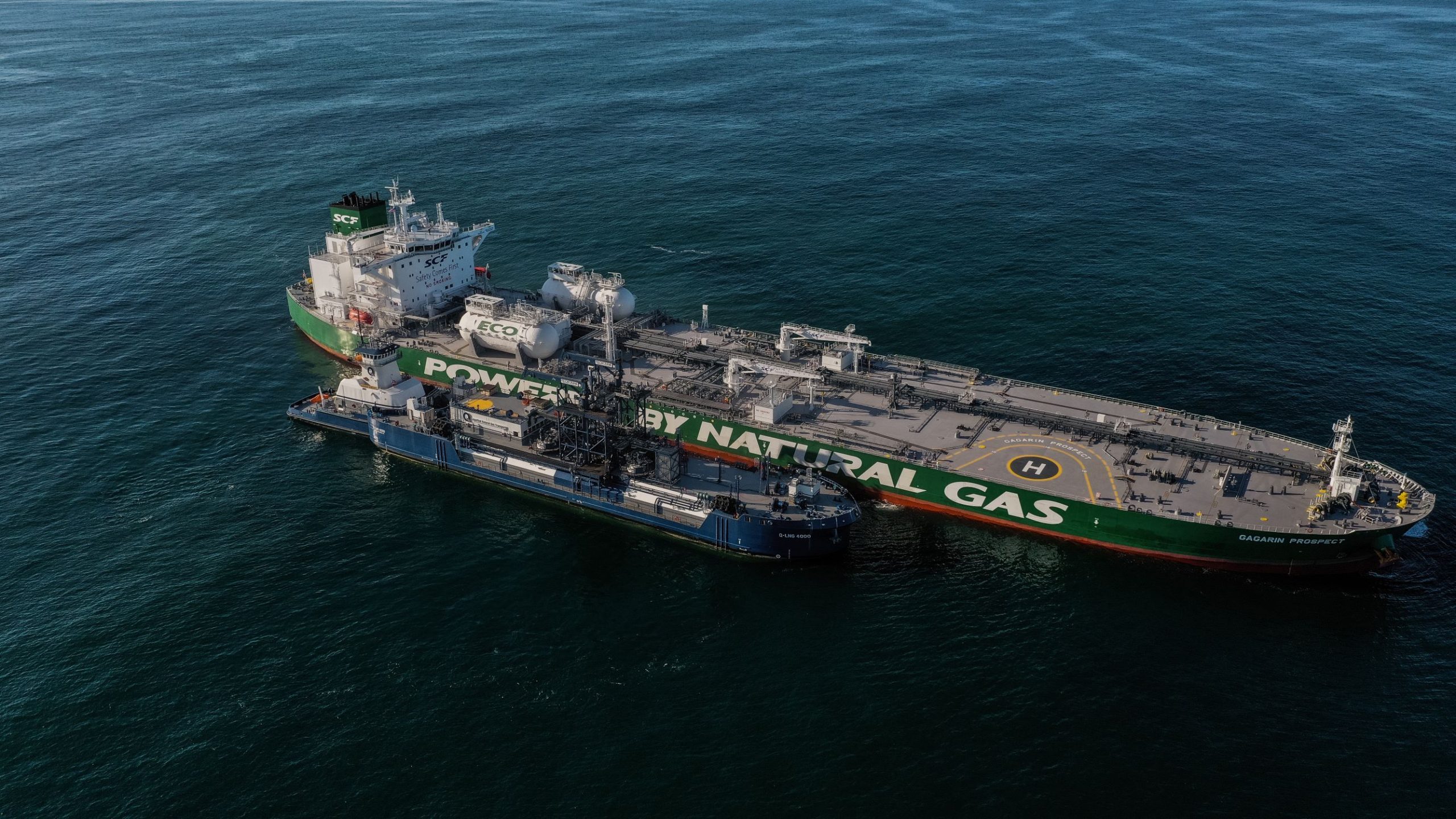 Gagarin Prospect is the lead vessel in SCF Group’s pioneering series of dual fuelled “Green Funnel” Aframax tankers, delivered in 2018/2019, and one of two in the series on long-term time charter to Shell. The continued expansion of LNG fuelling in the United States facilitates the growing use of vessels able to utilise LNG in their main engines, auxiliaries and boilers, providing for a much reduced emissions’ footprint compared with conventionally fuelled tankers. 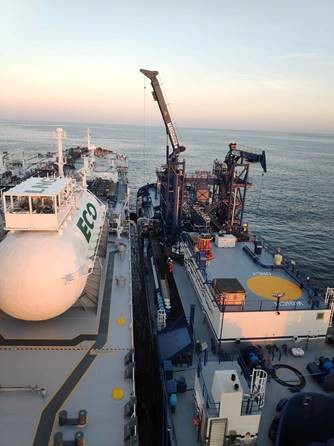 Sergey Popravko, Chief Operating Officer of SCF Group, said: “This is another important milestone highlighting the progress of the сombined efforts of Shell and Sovcomflot to reduce the environmental impact of energy shipping. Our work started back in 2018, with the first marine LNG fuelling operation of Gagarin Prospect in the Port of Rotterdam. The current LNG-bunkering confirms the leadership position of Sovcomflot in “green” shipping and our responsible approach to environmental safety, which lies at the heart of SCF’s activity. We are investing significant efforts to the transition of our fleet towards energy efficiency and the use of cleaner fuels”.

“We are pleased that Shell has opened up LNG fuelling along this important transatlantic trade route, demonstrating that marine LNG fuelling infrastructure is no longer limited to hubs in Northern Europe and Singapore”.

“It is symbolic that the bunkering took place at the Port of Canaveral, being the space hub of the United States of America, involving the Russian tanker Gagarin Prospect named after Planet Earth’s first cosmonaut.”

Karrie Trauth, General Manager, Shell Shipping & Maritime Americas, said: “As part of Shell’s target to be a net-zero emissions energy business by 2050, in step with society, we are working with customers across every sector to help them decarbonize. LNG is the choice today for new builds to help slow the rate of global greenhouse gas emissions while we work hard at developing zero-emissions fuels. I’m pleased to see the first Aframax tanker fuelled with LNG in the United States as this is an important milestone for the industry.”

Sovcomflot (SCF Group) stands at the forefront of decarbonisation and reducing the environmental risks of fleet operations. The company is making a transition from heavy fuels to “greener” gas, constantly replenishing the fleet with “green” vessels.

At the moment, SCF’s fleet operates 6 LNG Aframax tankers, with 5 more “green” vessels on order (2 crude and 3 oil-product tankers) and being built at the Zvezda Shipyard (Primorsky Krai). In addition, the entire fleet of gas carriers uses LNG gas as its main fuel (12 vessels in operation and 19 LNGC’s under construction). By 2025, 42 SCF vessels will be fully operated on environmentally safe liquefied gas, which will significantly reduce the impact on the environment.

In 2015, Sovcomflot and Shell embarked on an ambitious project to introduce LNG as a fuel for large-capacity tankers.

In February 2018, Shell has signed long-term charter agreements with SCF Group for the operation of two “Green” Aframax tankers (with a deadweight of 114,000 tonnes each). Gagarin Prospect is the flagship of this series, named after the first cosmonaut on Earth, Yury Gagarin. The vessel entered into charter in July 2018. The second tanker, Samuel Prospect, is named after the founder of Shell Transport & Trading Co, Sir Marcus Samuel, was transferred to the commercial management of Shell in 2019. 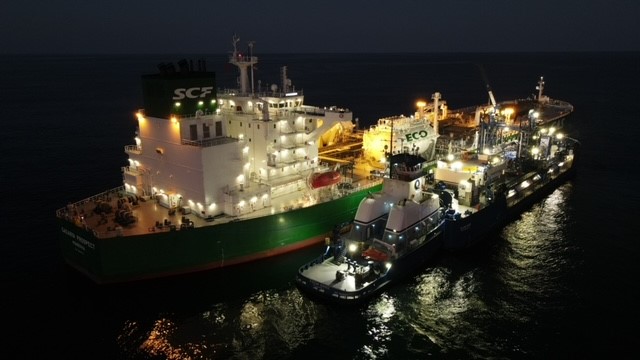 Gagarin Prospect was the first LNG-powered Aframax in the world, specially designed to operate on LNG. She was delivered in July 2018 and is the lead ship in a series of six sister-vessels.

In October 2018, Shell’s bunker vessel Cardissa delivered the first ship-to-ship bunkering of LNG to SCF’s Gagarin Prospect at the Port of Rotterdam, setting an important precedent for the global shipping industry, proving the feasibility of powering large-capacity vessels with LNG fuel.

Adopting LNG as a primary fuel for Arctic shipping has a good potential given the fragile ecosystem of the Arctic region and the rapid development of new industrial projects underway there.

In October 2018, another tanker of the Green series Lomonosov Prospect commenced an experimental voyage along the Northern Sea Route operating on LNG.

In May 2019 Gagarin Prospect won a 2019 Marine Propulsion Award and was named “Ship of the Year”.