GasLog Ltd. and its subsidiaries, an international owner, operator and manager of liquefied natural gas (“LNG”) carriers, reported its financial results for the three-month period and the year ended December 31, 2020.

As we separately announced today, GasLog has entered into an agreement and plan of merger (the “Merger Agreement”) with BlackRock’s Global Energy & Power Infrastructure Team (collectively, “GEPIF”), which is focused on essential, long-term infrastructure investments in the energy and power sector, pursuant to which GEPIF will acquire all of the outstanding common shares of GasLog Ltd. that are not held by certain existing shareholders for a purchase price of $5.80 in cash per share (the “Transaction”). Following the consummation of the Transaction, certain existing shareholders, including Blenheim Holdings Ltd., which is wholly owned by the Livanos family, and a wholly owned affiliate of the Onassis Foundation, will continue to hold approximately 55% of the outstanding common shares of GasLog Ltd. and GEPIF will hold approximately 45%. Please refer to the separate press release on the Transaction dated February 22, 2021 for additional information.

On November 10, 2020, GasLog Partners LP (“GasLog Partners” or the “Partnership”) announced its intention to engage with an independent advisor to assess its strategic alternatives. After a comprehensive analysis of the Partnership’s corporate structure, assets, financial position, competitive environment and current and expected commercial market, the following conclusions have been reached:

• GasLog Partners will maintain its current corporate structure with GasLog as its general partner;
• GasLog Partners will continue to pursue an independent commercial and operational strategy of owning, operating, and acquiring LNG carriers; and
• Strategy remains an ongoing focus of the GasLog Partners’ board and GasLog Partners is open to entertaining all value-enhancing options for the business as it continues to reduce debt and enhance liquidity. 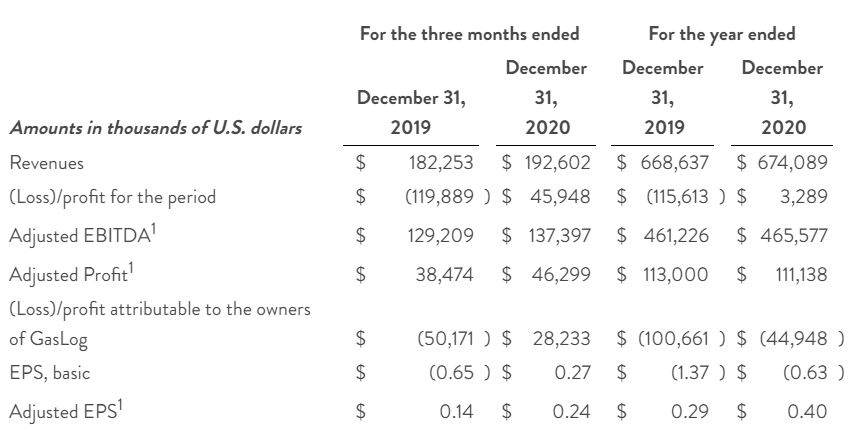 This quarter we amended the definition of the spot fleet and amended the revenue breakdown accordingly, to reflect our commercial strategy. Specifically, vessel revenues are now allocated to two categories: (a) spot fleet and (b) long-term fleet. The spot fleet category contains all vessels that have contracts with initial duration of less than five years. The long-term fleet category contains all vessels that have charter party agreements with initial duration of more than five years. Both categories exclude optional periods.

Revenues were $192.6 million for the quarter ended December 31, 2020 ($182.3 million for the quarter ended December 31, 2019). Revenues from the GasLog 100% owned fleet increased by $22.7 million due to the four vessel deliveries in 2020. This increase was partially offset by a decrease of $11.5 million from the vessels owned by GasLog’s subsidiary, GasLog Partners, mainly attributable to the expiration of the initial multi-year time charters of the Methane Alison Victoria, the Methane Rita Andrea and the Methane Shirley Elisabeth.

Impairment loss on vessels was $6.2 million for the quarter ended December 31, 2020 ($162.1 million for the quarter ended December 31, 2019). As of December 31, 2020, the Group recognized a non-cash impairment loss of $6.2 million in aggregate on certain of its Steam vessels. The non-cash impairment loss of $6.2 million was recognized with respect to two Steam vessels owned by the Partnership, the Methane Alison Victoria and the Methane Heather Sally ($5.1 million), and one Steam vessel owned by GasLog, the Methane Lydon Volney ($1.1 million) in addition to the $22.5 million recognized in June 2020. The COVID-19 pandemic placed downward pressure on economic activity and energy demand, as well as significant uncertainty regarding future near-term LNG demand and, therefore, LNG shipping requirements. This has reduced our expectations for the estimated rates at which employment for our vessels could be secured over the near-term in the spot market.

Gain on derivatives was $2.0 million for the quarter ended December 31, 2020 ($12.4 million for the quarter ended December 31, 2019). The decrease in gain was mainly attributable to a net increase of $7.9 million in realized loss on derivatives held for trading and a $3.3 million decrease in unrealized gain from the mark-to-market valuation of derivatives held for trading which were carried at fair value through profit or loss.

Adjusted Profit1 was $46.3 million for the quarter ended December 31, 2020 ($38.5 million for the quarter ended December 31, 2019), adjusted for the effects of the non-cash gain on derivatives, the impairment loss on vessels, the write-off of unamortized loan and bond fees due to the sale and leaseback transaction of the GasLog Hong Kong, the restructuring costs and the net foreign exchange losses.

As of December 31, 2020, GasLog had $367.3 million of cash and cash equivalents, of which $147.8 million was restricted cash, in relation to the amount drawn for the delivery of the GasLog Galveston until its delivery from the shipyard on January 4, 2021. In addition, a total amount of $23.5 million was held as cash collateral with respect to our derivative instruments and is included in Other non-current assets and Prepayments and other current assets, which has been reduced to approximately $13.0 million as of February 22, 2021. As of December 31, 2020, GasLog had an aggregate of $3.8 billion of indebtedness outstanding under its credit facilities and bond agreements, of which $245.6 million was repayable within one year, and $196.2 million of lease liabilities, of which $9.6 million was payable within one year.

As of December 31, 2020, the total remaining balance of the contract prices of the two LNG carriers on order was $321.1 million (excluding the GasLog Galveston which was delivered on January 4, 2021), which GasLog expects to fund under the facility signed on December 12, 2019 with 13 international banks to provide debt funding for its current newbuilding program (the “Newbuilding Facility”), cash balances and cash from operations.

As of December 31, 2020, GasLog’s current assets totaled $437.5 million, while current liabilities totaled $459.4 million, resulting in a negative working capital position of $21.9 million. Current liabilities include $59.6 million of unearned revenue in relation to hires received in advance of December 31, 2020 (which represents a non-cash liability that will be recognized as revenue in January as the services are rendered). Taking into account the volatile commercial and financial market conditions experienced throughout 2020, we anticipate that our primary sources of funds over the next twelve months will be available cash, cash from operations and existing borrowings, including the credit agreements entered into on July 16, 2020 and July 30, 2020, which refinanced in full the debt maturities due in 2021, as well as the sale-and-leaseback transactions we concluded in October 2020 and January 2021 that released incremental liquidity of $61.2 million. We believe that these anticipated sources of funds will be sufficient to meet our liquidity needs and to comply with our banking covenants for at least twelve months from the date of this report. 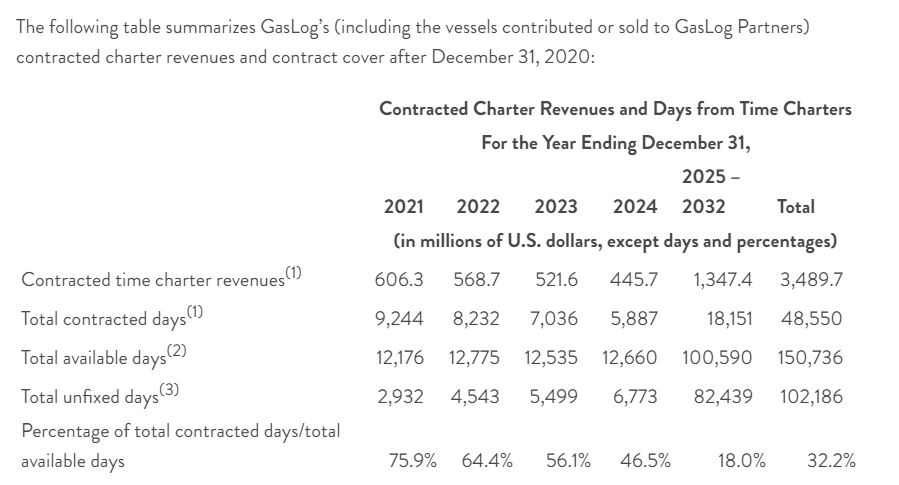 Other than the assumptions reflected in the footnotes to the table, including our assumption that our newbuildings are delivered on schedule, the table does not reflect events occurring after December 31, 2020. The table reflects only our contracted charter revenues for the ships in our owned fleet and bareboat fleet for which we have secured time charters, and it does not reflect the costs or expenses we will incur in fulfilling our obligations under the charters, nor does it include other revenues we may earn, such as revenues for technical management of customer-owned ships. In particular, the table does not reflect any revenues from any additional ships we may acquire in the future, nor does it reflect the options under our time charters that permit our charterers to extend the time charter terms for successive multi-year periods. The entry into new time charter contracts for the vessels that are operating in the spot term market and any additional ships we may acquire, or the exercise of options extending the terms of our existing charters, would result in an increase in the number of contracted days and the contracted revenue for our fleet in the future. Although the contracted charter revenues are based on contracted charter hire rate provisions, they reflect certain assumptions, including assumptions relating to future ship operating costs. We consider the assumptions to be reasonable as of the date of this report, but if these assumptions prove to be incorrect, our actual time charter revenues could differ from those reflected in the table. Furthermore, any contract is subject to various risks, including performance by the counterparties or an early termination of the contract pursuant to its terms. If the charterers are unable or unwilling to make charter payments to us, or if we agree to renegotiate charter terms at the request of a charterer or if contracts are prematurely terminated for any reason, we would be exposed to prevailing market conditions at the time and our results of operations and financial condition may be materially adversely affected. Please see the disclosure under the heading “Risk Factors” in our Annual Report on Form 20-F filed with the SEC on March 6, 2020 and the Quarterly Reports on Form 6-K filed with the SEC on May 7, 2020, August 5, 2020 and November 10, 2020. For these reasons, the contracted charter revenue information presented above is not fact and should not be relied upon as being necessarily indicative of future results and readers are cautioned not to place undue reliance on this information. Neither the Company’s independent auditors, nor any other independent accountants, have compiled, examined or performed any procedures with respect to the information presented in the table, nor have they expressed any opinion or any other form of assurance on such information or its achievability and assume no responsibility for, and disclaim any association with, the information in the table.

World Shipping Council strengthens its organisation in Asia and the USA