Gazing into the recession crystal ball

The protracted trade war between China and the United States and a deteriorating global growth outlook have left investors nervous that the longest expansion in American history is at risk of ending.

Recession fears were sparked earlier this year when the yield curve inverted – a key indicator of a pending downturn.

An inverted yield curve occurs when yields on short-term bonds are higher than those on long-term bonds, a sign investors are so worried about the future that they are willing to hold long-term bonds, which are usually viewed as a safer alternative to stocks and other investments, even when the payouts are low.

While concerns have eased, an economic rebound is not expected any time soon, according to a recent Reuters poll of economists, and pockets of the economy and markets which are causing concern. Slowdowns were seen in manufacturing and private payrolls data out this week. 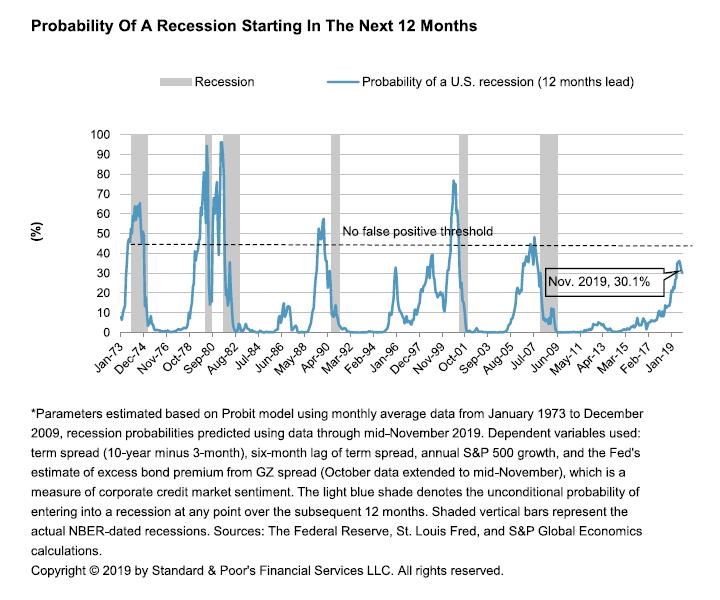 Here are some indicators that investors watch for signs of economic health:

1. THE YIELD CURVE
When the spread between the yield on the 3-month Treasury bill and that of the 10-year Treasury note slips below zero, as it did earlier this year, it points to investors accepting a lower yield for locking money up for a longer period of time.

That gauge has a solid track record as a predictor of recessions. But it can take as long as two years for a recession to follow a yield curve inversion. While the inverted yield curve reverted to normal in October, that does not mean that the economy is out of the woods. On the contrary, such a return to normalcy after an inversions is an oft-repeated pattern before a recession. 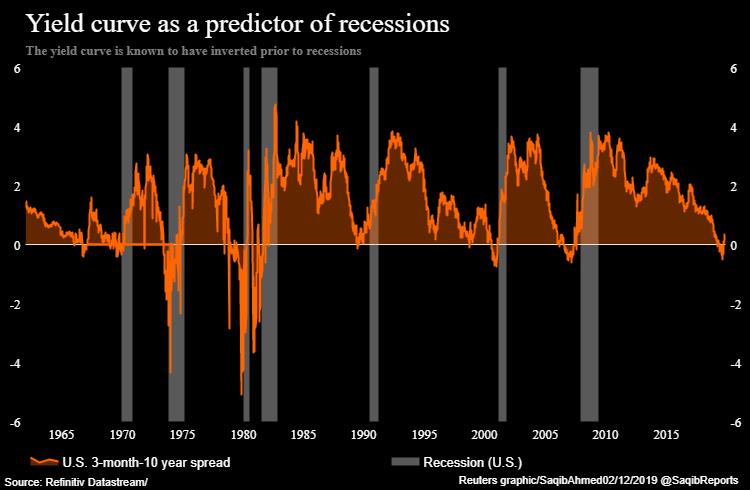 2. THE SAHM RULE
The newly minted Sahm Rule identifies signals related to the start of a recession when the three-month moving average of the national unemployment rate rises by 0.50 percentage point or more relative to its low during the previous 12 months.

Devised by Federal Reserve economist and consumer section chief Claudia Sahm, the rule aims to flag the onset of recession more quickly than the current process that formally dates business cycles. It is currently well below the level of concern, at just -0.03 percentage point. 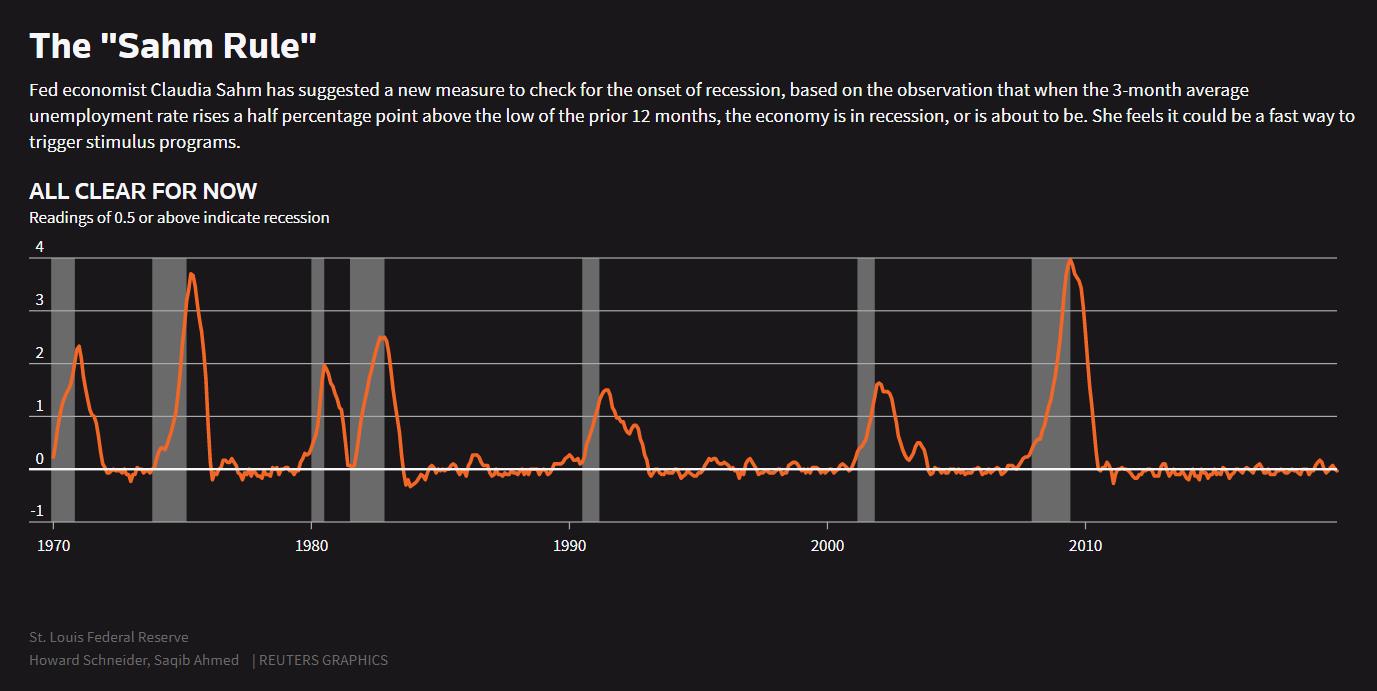 Investors will be watching claims over the coming months for signs that simmering trade tensions, which have dimmed the economy’s outlook, are spilling over to the labor market. 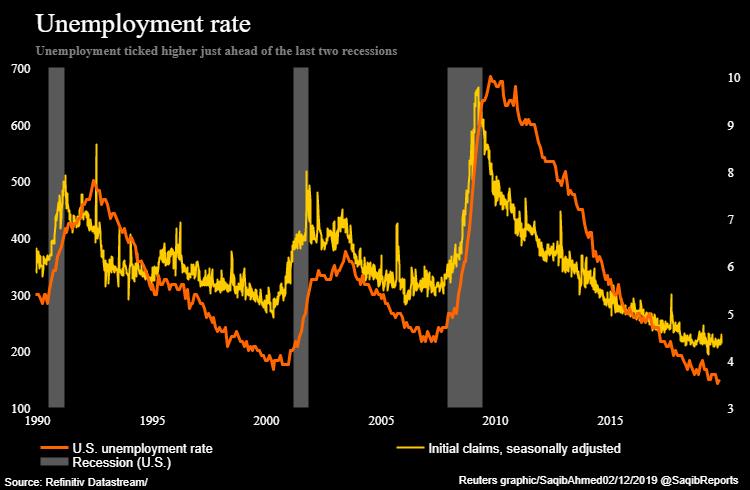 4. GDP OUTPUT GAP
The output gap is the difference between actual and potential economic output and is used to gauge the health of the economy. 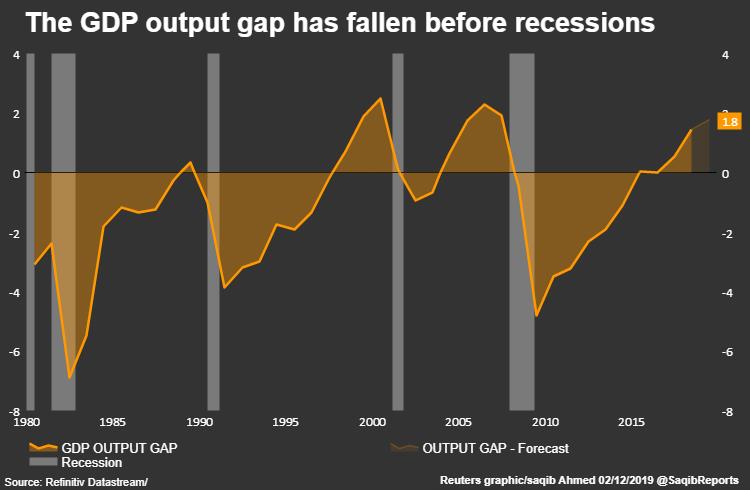 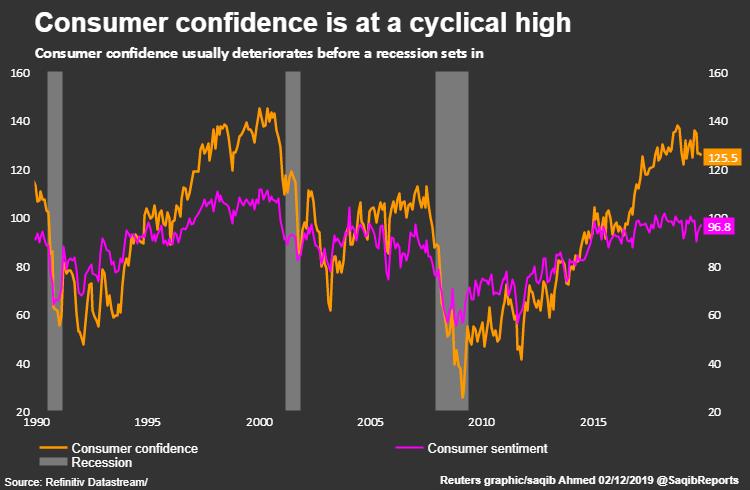 6. STOCK MARKETS
Falling equity markets can signal a recession is looming or has already started to take hold. Markets turned down before the 2001 recession and tumbled at the start of the 2008 recession.

On a 12-month rolling basis, the benchmark S&P 500 index .SPX has turned down ahead of the last two recessions. The 12-month rolling average percentage move recently hit a more than one-year high. 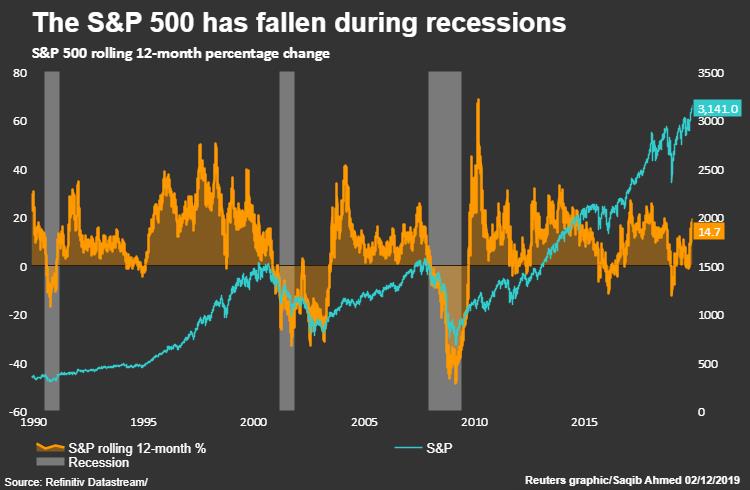 The Boom-Bust Barometer, devised by Ed Yardeni at Yardeni Research, measures spot prices of industrial inputs like copper, steel and lead scrap, and divides that by initial unemployment claims. The measure fell before or during the last two recessions and has retreated from a peak hit in April. 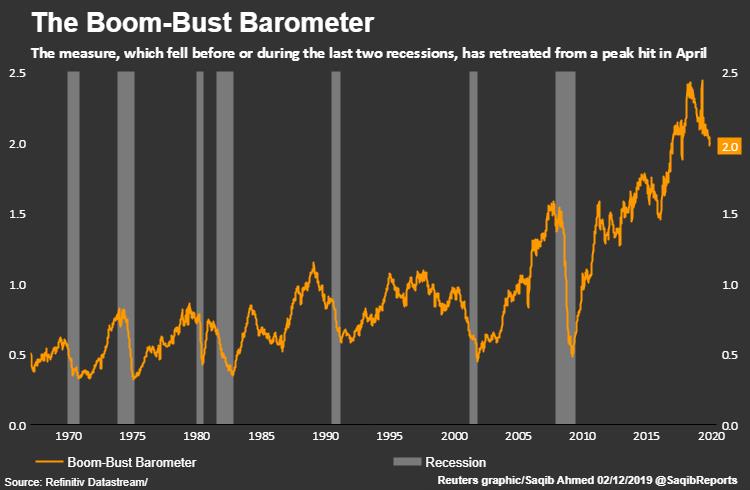 8. HOUSING MARKET
Housing starts and building permits have fallen ahead of some recent recessions. U.S. homebuilding rebounded in October and permits for future home construction jumped to a more than 12-year high, pointing to strength in the housing market amid lower mortgage rates. 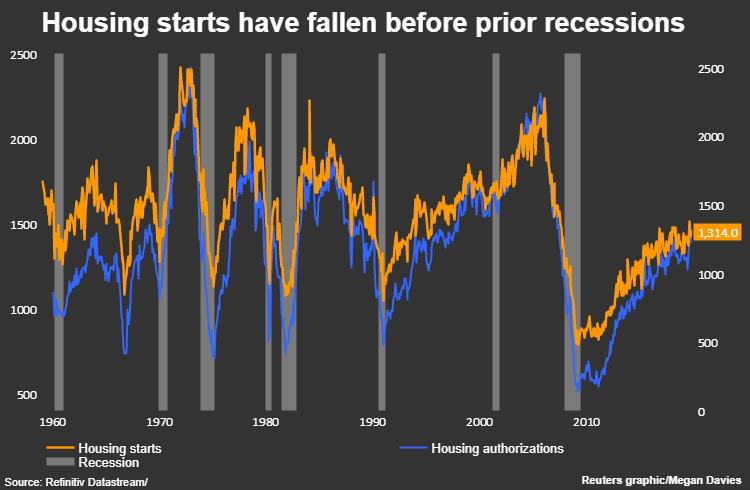 9. MANUFACTURING
Given the manufacturing sector’s diminished role in the U.S. economy, the clout of the Institute for Supply Management’s manufacturing index as a predictor of U.S. GDP growth has slipped in recent years. However, it is still worth watching, especially in the event of an extended period of readings below the 50 level, which indicates contraction.

U.S. factory activity contracted for a fourth straight month in November as new orders slumped to around their lowest level since 2012.

10. EARNINGS
S&P 500 earnings growth dipped ahead of the last recession. Currently earnings estimates for S&P 500 companies have been coming down.

Earnings have struggled this year after last year’s tax-fueled gains and on worries about the U.S.-China trade war, but many strategists think the third or fourth quarter will be the trough for the current cycle.

Credit spreads – the premium investors are paid above the yield on safer U.S. Treasuries to hold the riskier securities – typically widen when the perceived risk of default rises.

Investors are now pulling out of the riskiest U.S. corporate debt amid concerns about leverage levels as the economy slows. The spread of triple-C-rated bonds are at a three-year high of 11.44% as measured by the ICE BofA CCC and lower U.S. high-yield index. 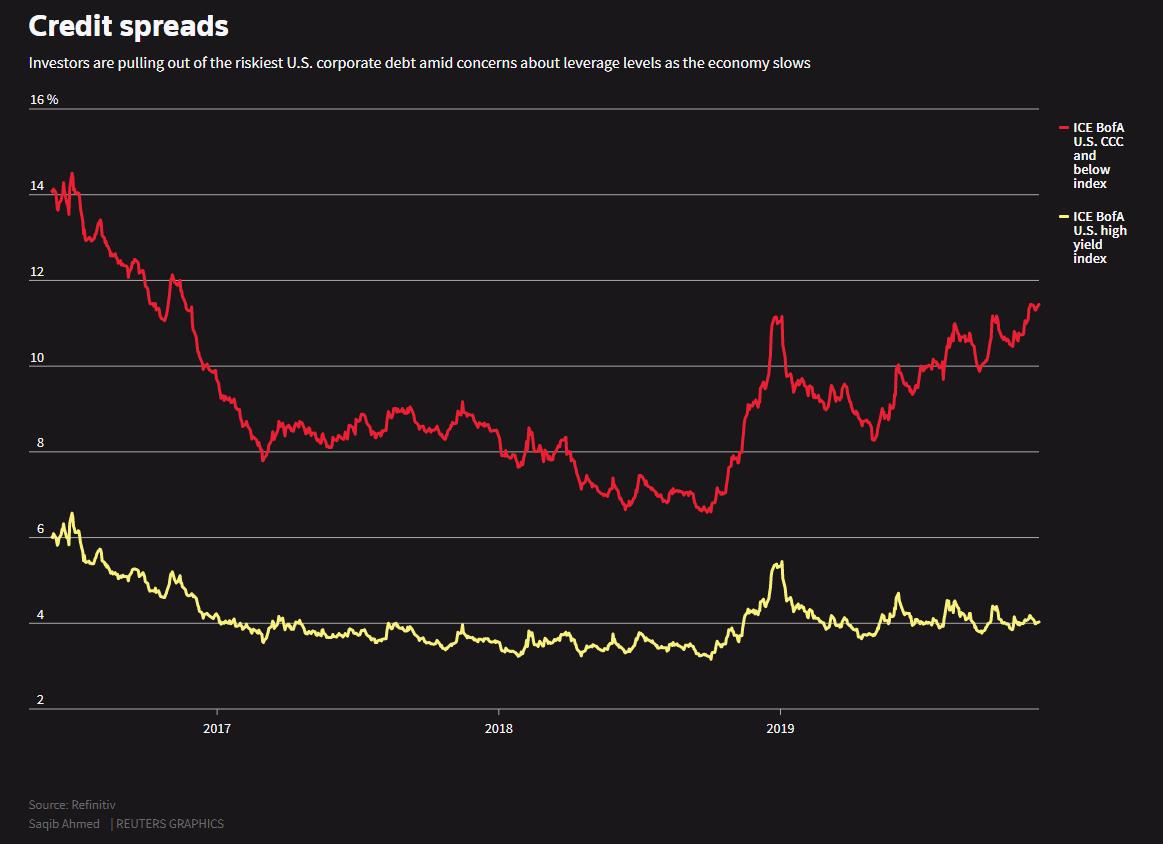