GEA sets sail for marine technologies of the future: In the safe harbor for digitalization and fuels

Due to worldwide efforts to stop global warming, the shipping industry is also on the lookout for alternative fuels or energy sources. The International Maritime Organization (IMO) has set a goal of reducing total annual greenhouse gas (GHG) emissions by at least 50 percent by 2050 compared to the levels emitted in 2008.

This goal cannot be achieved by further improvements in the efficiency of ship propulsion systems alone. The use of alternative energy sources is necessary. Renewable energy can be generated as electrical energy by wind turbines, solar cells or hydroelectric power plants. Not only from GEA’s point of view, the conversion of the generated electricity into hydrogen by an electrolysis plant is the most promising way.

According to the current state of the art, storing hydrogen on board ships would require pressure vessels with pressures in the range of 350 bar and more. However, due to the low density of hydrogen, a too large tank volume would be required. Cooling the hydrogen to -253 °C would allow it to be stored in liquid form, but this requires energy for cooling and energy to maintain this low level while it is stored on board. Alternatively, hydrogen can be converted to ammonia.

Ammonia only needs to be cooled down to -33 °C to store it in liquid form under atmospheric pressure. Of course, permanent cooling energy is also required here to keep the temperature down, as well as good thermal insulation of the tanks to minimize heat input from the environment into the tank. However, proven technologies are available for this purpose: Liquefied natural gas (LNG) is already used on board hundreds of ships today. Here, the temperature must be -162 °C to keep it liquid at ambient temperature. Handling and storing a substance at -33 °C is far less demanding than handling and storing a substance at -162 °C. A growing community is convinced that using ammonia as an energy source is an attractive option for bringing energy on board. 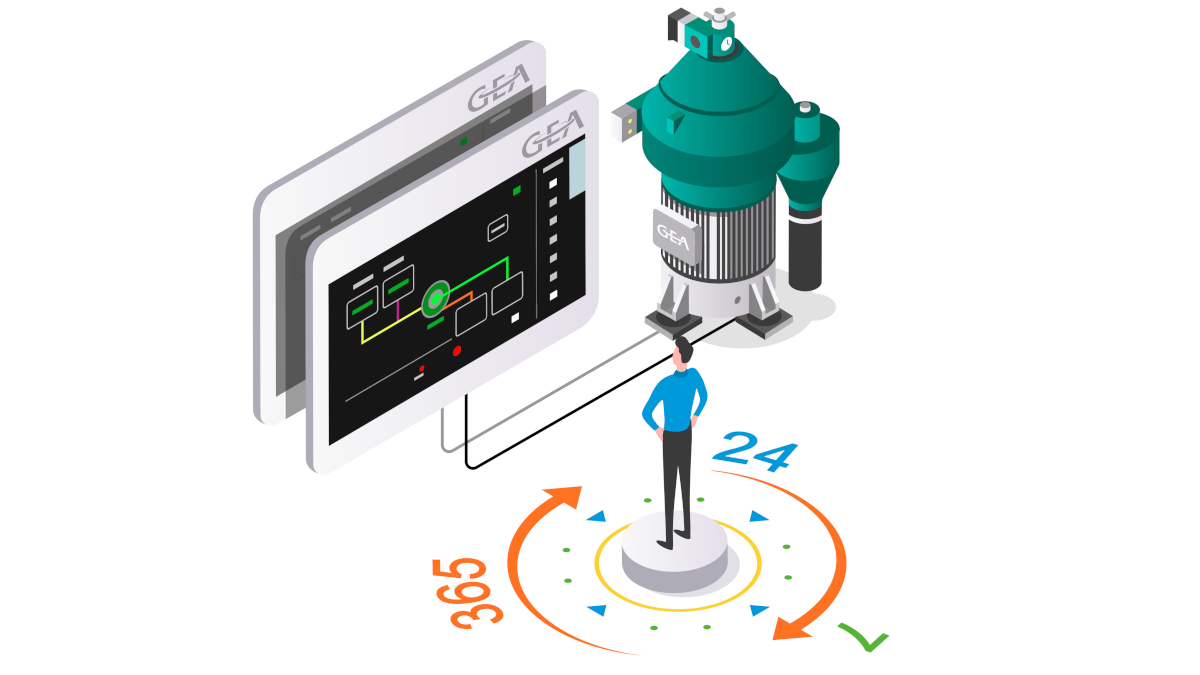 Global production of ammonia is estimated at more than 140 million tons. This figure shows that the handling of ammonia is well understood worldwide. It is now transported all over the world by truck, rail and, of course, by ship. Thus, the storage of ammonia in larger quantities on board ships is also a proven technology. Since the current production of ammonia also produces CO2, the above-described way of producing ammonia based on green energy is necessary for its future use as an energy carrier.

In addition, ammonia can also be used on board ships as a hydrogen carrier for hydrogen fuel cells or for direct use in ammonia fuel cells, which are currently under development.

GEA as a system supplier
GEA will be one of the drivers in the further development of the transport and conditioning system for ammonia between the storage tank and the combustion engine. The existing know-how and many years of experience are based on the development and production of fuel separators and fuel booster units, which are used in high volumes in the maritime industry. In addition, GEA has decades of experience in the use of ammonia as a coolant on board ships.

Everything from one company – GEA
GEA produces components such as compressors, separators, housings, valves and filters in its own manufacturing facilities. GEA is well known in this particular part of the shipping industry. Meeting the requirements of the classification authorities for design, type approval and integration on board is part of GEA’s daily business. That is why GEA strongly believes in driving this technology forward and supporting global efforts to reduce greenhouse gas emissions.
GEA is one of the largest manufacturers of mechanical equipment, offering sustainable solutions for demanding production processes in various end-user markets and a comprehensive service portfolio.

On course for digitalization: data management systems for ships
Digitization and data use have also triggered far-reaching change in marine technology. Modern data management systems ensure computer-aided acquisition, storage, maintenance, processing, analysis and visualization of data from the technology of every ship. GEA develops intelligent and automated solutions, especially in the field of maritime separation technology, which offer safe operation and an improved CO2 balance while reducing operating costs. And it doesn’t have to be a new separator at all. New digital tools developed by GEA in the form of upgrade kits enable ship operators to automate as well as optimize separation processes from existing and new GEA centrifuges.

Separators make the difference on board
In the marine sector, separation technology fulfills important functions, especially in the treatment of fuel and lubricating oil as well as bilge water. GEA centrifugal separators are among the equipment on board that is subjected to particularly high loads. “In combination with the GEA marine Upgrade Kit, our separators are crucial for the digitalization of fuel and lube oil treatment and pave the way for an intelligent, self-thinking separation process,” explains Tim Hundertmark, Senior Director Design Separators, GEA.
The GEA marine Upgrade Kit digitizes several separation processes in parallel. Five so-called “guards” monitor and control important functionalities.

Modular Type Package (MTP) on board
Modules with Modular Type Package (MTP) on board? “This will no longer be a question in the medium term,” says Sven Mario Jadzinski. The Senior Director Sales Marine at GEA in Oelde is one of the protagonists of the “Module Type Package” and is therefore also involved in an MTP working group of the VDMA. MTP has what it takes to revolutionize shipbuilding and process technology in particular. Interfaces are more in demand than ever before in order to be able to network all the participants in a ship automation system. Networking, in turn, is necessary so that the overall organism can be optimized. “Classic process equipment has reached its mechanical limit in terms of optimization,” says Jadzinski. “The key to process monitoring, availability and further cost savings clearly lies in digitization.”
Source: GEA