Home / Commodities / Freight News / Germany continued to export logs at record pace in early 2020, with almost 50% of the volume destined for China

Germany continued to export logs at record pace in early 2020, with almost 50% of the volume destined for China

The log market in Germany has been extremely volatile in the first half of 2020, with high demand from the export market and a tight supply of fresh green logs. When the Coronavirus Epidemic forced sawmills to close in March, domestic demand for sawlogs fell and the price increases seen earlier in the quarter reversed – resulting in both domestic and export prices falling.

Sawlog prices varied throughout the country depending on the level of local supply, the quality of the beetle-killed timber, the availability of fresh logs, and the competition from log exporters.

Log prices also varied due to contract volumes and spot purchases. Towards the end of the quarter, spot prices fell to levels that barely covered the costs for logging and hauling the timber. The 1Q/20’s estimated average sawlog price was an increase from the previous quarter but substantially lower than the 1Q/19, according to the WRQ.

Softwood log exports from Germany have increased dramatically over the past five years, from 2.1 million m3 in 2014 to 7.4 million m3 in 2019. The oversupply of logs resulted in record high exports in the 3Q/19 followed by two quarters of q-o-q declines (see chart). 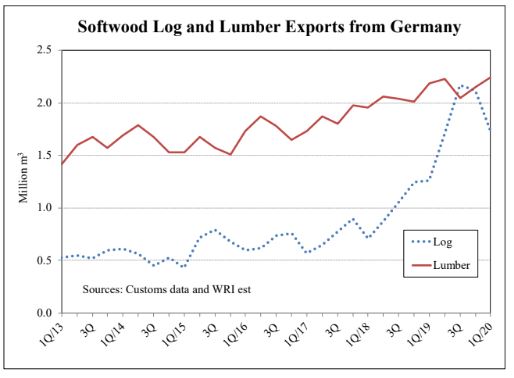 Despite the reduction in exports during the winter months, total shipments during the first four months of 2020 were up 38% as compared to the same period in 2019.

China has quickly become the largest market for German logs, accounting for almost 50% of all exported logs so far in 2020. From January to April this year, almost 2.4 million m3 of softwood logs were shipped to China. Log exportation from Europe to Asia is a recent trend. As late as 2017, there were practically no shipments of German logs outside of Europe.

Log export prices were fairly stable during most of 2019 but started to decline in late 2019 and early 2020. In March and April 2020, average prices were down about 14% as compared to the same months in 2019. Prices for logs destined for China have also declined substantially from early 2019 but are still nominally higher than the prices for logs shipped to other markets.

The large supply of logs in Germany has had little impact on the consumption of logs by the domestic sawmilling industry. The increase in lumber exports has been less dramatic than that of logs, with the y-o-y rate of change actually falling the past three years, from 12% (2015 to 2016) to 6% (2018 to 2019).
Source: Wood Resources International