Germany: invest more in infrastructure, digital economy and energy transition for a strong and greener recovery from COVID-19 crisis

Germany should increase public infrastructure investment and accelerate its digital transformation and energy transition to strengthen and sustain its recovery from the economic crisis sparked by COVID-19, according to a new OECD report.

The latest OECD Economic Survey of Germany credits the government’s swift and effective crisis response and a strong healthcare system for enabling a less severe social and economic impact from the pandemic than in many neighbouring countries. The 1.4 percentage point rise in the unemployment rate in the first half of the year was small by international standards, thanks to the extensive use of the government-subsidised short-time work scheme. Yet the crisis has still pushed the economy into a deep recession after a decade of expansion, with economic output projected to shrink by 5.5% in 2020 and recover only gradually with GDP growth at 2.8% in 2021 and 3.3% in 2022. It is important that measures to support the health system and the hardest hit sections of society and the economy are not scaled back too fast.

“Germany has suffered a severe economic shock from COVID-19, despite the government’s swift and substantial response. Germany should use the recovery as an opportunity to invest in its digital transformation, accelerate its transition to a low-carbon economy, and increase labour market inclusion,” said OECD Secretary-General Angel Gurría.

While the government’s June stimulus package took encouraging steps towards advancing the digital and energy transitions, more infrastructure investment is needed to spur a sustainable and inclusive recovery and ensure that Germany can reap the productivity benefits of digital technologies and the environmental benefits of greener energy and transport, the Survey says.

Despite being a world leader in technology and engineering, Germany lags other advanced economies on the digital transformation at a time when the pandemic has heightened the need for good quality and reliable digital connectivity. Average mobile data usage and connection speeds are low, and uneven availability of high-speed Internet has created an urban-rural digital divide. Many small and medium-sized enterprises (SMEs) lag behind in the use of digital technologies, such as cloud computing, that are key for innovation and productivity. Only a small percentage of young people have programming skills, with the share even lower among girls and women. 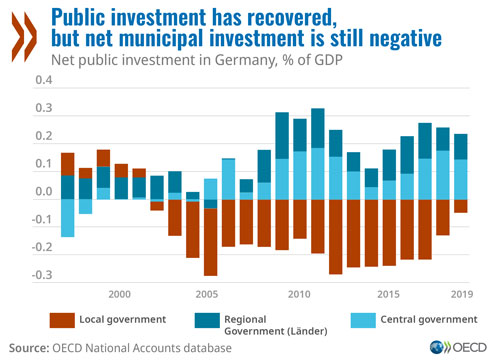 Improving competition among Internet providers and simplifying administrative processes for network deployment would help to improve digital connectivity. SMEs should be given better access to financial support, including Research and Development tax incentives, to help them adopt advanced technologies. More should also be done to promote digital skills across the population and to make computational thinking part of the school curriculum from an early age.

Germany has made significant progress on climate policy, particularly in the past year, with the introduction of an emissions pricing system in the transport and heating sectors, increased promotion of electric vehicles and charging stations, and higher targets for renewable electricity generation. However, per capita greenhouse gas emissions in Germany are still high by European standards. If Germany is to meet its Paris Agreement target of reducing its greenhouse gas emissions by 55 percent by 2030 relative to 1990 levels, greater efforts will be needed. The Survey recommends reducing coal-fired power generation earlier than planned, expanding energy-efficient building renovation, linking the pricing of fuels, vehicles and road use more clearly to environmental damage, and creating alternative, climate-friendly transport options.

Although public investment has increased since 2014, two decades of weak investment have left a backlog, particularly in the areas of low-emission transport solutions, digital transformation, health, social housing, early childhood education and power grids. In view of the negative net investment in many financially weak municipalities, the Survey recommends the federal government further support investment by municipalities.

The Survey also recommends expanding local planning capacity and improving co-operation across government agencies to speed up the implementation and effectiveness of infrastructure projects. It would be sensible, for example, to use independent infrastructure planning advice that facilitates alignment between different levels of government and sectors and gives construction firms more security in their planning.
Source: OECD

2020-12-09
hellenicshippingnews..
Previous: Russia may exempt some of Rosneft’s Arctic oil fields from export duty
Next: 5 major trends that are being accelerated by the COVID-19 pandemic