World oil indexes have been rather volatile during the week. First, the possible trade war posed a threat to demand. However, in the beginning of the week geopolitical concerns over a military strike in Syria and possible fallout across the Middle East compensated concerns over surging U.S. shale production and over a potential downside to global oil demand. At the moment, there appears to be no escalation of the conflict with Russian and Iranian forces, after the U.S. and allies the UK and France launched attacks against Syria.

MABUX World Bunker Index (consists of a range of prices for 380 HSFO, 180 HSFO and MGO at the main world hubs) demonstrated slight upward trend in the period of Apr.12 – Apr.19:

There was a number of forecasts have been published by leading international organisations during the week.

The International Energy Agency (IEA) reported that OPEC and its allies appeared to have accomplished their mission of bringing global oil stocks to desired levels. As per IEA, OECD commercial stocks dropped by 26 million barrels in February and were just 30 million barrels above the five-year average at end-February. The average could be reached by May, on the assumption of tight balances in 2Q18. The IEA report followed up OPEC’s monthly release on April, 12 that said the global oil inventory surplus is close to evaporating. The IEA report also confirms the monthly data from OPEC earlier last week, which showed the group’s output declined by 201,000 in March – the factor supporting global fuel indexes.

Barclays in turn significantly tightened its forecast for Venezuelan production, lowering it to 1.1-1.2 million barrels per day (bpd), down sharply from its previous forecast of 1.4 million bpd. That helped guide the bank’s upward revision for its price forecast for both WTI and Brent in 2018 and 2019, a boost of $3 per barrel. Bank also said that the explosive growth of U.S. shale keeps the market well supplied, and ultimately forces a downward price correction in the second half of the year. Meantime, one of the supply risks is the potential confrontation between the U.S. and Iran. The re-implementation of sanctions threatens to cut off some 400,000 to 500,000 bpd of Iranian supply.

Goldman Sachs noted that the sudden spike in geopolitical tension only reinforces its prediction of a 10 percent increase in commodity prices over the next 12 months. Talking about the risk of a disruption of Iranian supply, Bank considers that U.S. sanctions could force European refiners to reduce their purchases of Iranian oil, but the real question is if Iranian oil is simply rerouted to Asia or if Iran is forced to incur cutbacks. The effectiveness of U.S. sanctions on shipping insurance might be the key to answering this question.

U.S. President Donald Trump has threatened to pull out of a nuclear deal be-tween Iran and six major powers by May 12 unless Congress and European al-lies help fix it with a follow-up agreement. If Iranian production does decline following the reintroduction of sanctions, this could push fuel prices up.

Geopolitical tensions have returned after the United States, France and Britain launched 105 missiles on Apr.14, targeting what they said were three chemical weapons facilities in Syria in retaliation for a suspected poison gas attack on April 7. Meantime, as far as developments in Syria are concerned, the market has had a sigh of relief in the sense that there is no escalation, either diplomatically, or on the ground. Although Syria itself is not a significant oil producer, the Middle East is the world’s most important crude exporter and tension in the region tends to put oil/fuel markets on edge.

For fuel prices, much also depends on what OPEC decides at its June meeting. All recent signs point to an extension of the supply curbs through the end of this year, and perhaps through the first half of 2019 as well. OPEC countries appear more determined than ever to erase the supply surplus. Much of the motivation comes from Saudi Arabia, OPEC’s most influential member, who reportedly wants $80 per barrel to increase the valuation of Saudi Aramco.

Venezuela’s production fell by 55,000 barrels per day in March, to 1.488 million bpd. Analyst consensus is that Venezuela is unlikely to pull out of this tailspin. In fact, Venezuela’s position is likely to worsen, with Venezuelan refineries expected to close due to crude shortages and underinvestment. This drop in production is bound to support higher fuel prices.

The White House is reportedly preparing new tariffs on China as it tries to step up the pressure on Beijing. The U.S. will also draw up prohibitions on Chinese investment in advanced U.S. technology, whether by acquisition, joint ventures, licensing or any other arrangement.

Even as OPEC has apparently achieved its goal of draining surplus stocks, the group seems set on keeping the cuts in place through the rest of this year. Meanwhile, fuel prices may face a correction as U.S. production continues to surge and the market has already priced in the potential of renewed sanctions on Iran as well as a further Venezuela production drop. We suppose bunker prices may continue the phase of irregular changes next week. 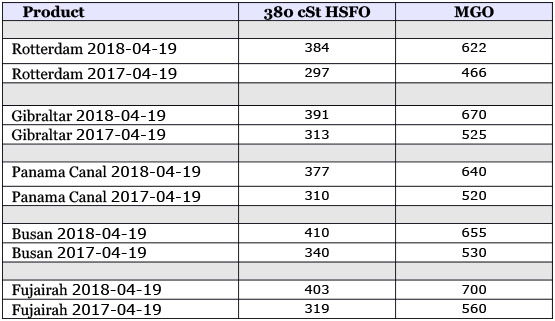