A global crunch for U.S. dollars that was a hallmark of the early moments of the coronavirus crisis appears to have passed, the latest milestone in a remarkable turnaround in financial conditions engineered by the Federal Reserve and other top central banks.

Data from the Fed on Thursday showed its peer banks around the world this week tapped it for the fewest dollars in nearly three months, and it was the main factor driving a surprise reduction in the Fed’s $7 trillion (£5.6 trillion) balance sheet – the first since February and the largest since the waning days of the financial crisis more than a decade ago.

The balance of the Fed’s foreign exchange swaps with other central banks dropped by $92 billion as of Wednesday to $352.5 billion from $444.5 billion a week earlier. The total amount outstanding in the swap lines, designed to ease a surge in demand for U.S. currency in the participating banks’ jurisdictions during the early weeks of the crisis, was the lowest since early April.

Coupled with other indications of slackening demand for the Fed’s bevy of emergency liquidity facilities, the reduction in currency swap line usage is for many analysts a sign that global financial markets are returning to near-normal after being upended by the coronavirus outbreak in February and March.

In that period, stocks plunged into bear markets at record speed, risk premiums in credit markets mushroomed and demand for greenbacks overseas well outstripped supply, making the dollar unbearably pricey for foreign governments and companies with dollar-denominated liabilities. The Fed acted swiftly to try to restore order, and along with facilities aimed at U.S. markets, expanded currency swap line agreements to nine central banks in addition to the five with which it has had standing agreements. 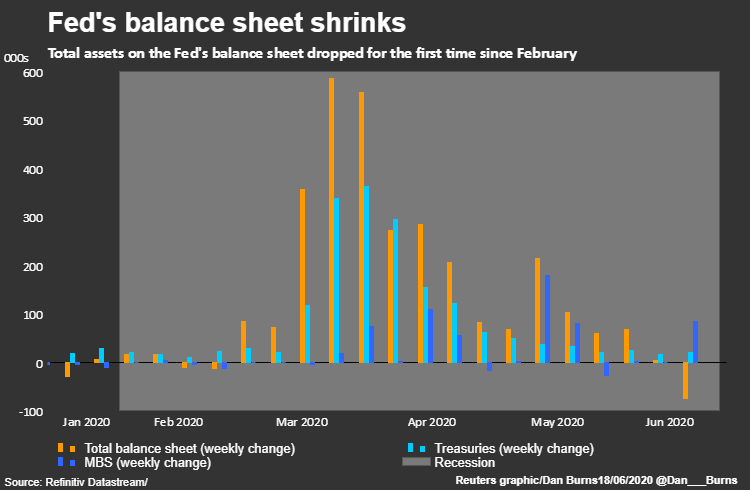 “Given the restored health of (dollar) funding markets, and the fact that the swap lines will still be there serving as a backstop, we expect this handoff from central bank liquidity to the market to be relatively uneventful,” said John Roberts, U.S. rates strategy analyst at NatWest Markets.

But the drop-off from here may be swift.

“We expect a more rapid decline over the coming months as the majority of the swaps will roll off,” Citigroup economists wrote in a note to clients on Friday.

In addition to the decline in swap line usage, several of the Fed’s emergency facilities have seen falling demand in the past several weeks. Outstanding balances in programs offering credit to primary dealers, commercial paper issuers, money market mutual funds and direct loans to banks to meet reserve requirements have all plateaued or fallen sharply since May.

Perhaps most emblematic of the turn is the plunge in demand for repurchase agreement – or repos. Amounts outstanding in these short-term funding deals between commercial banks and the Fed are at their lowest levels since last September, when a cash-squeeze forced the central bank to pump billions of dollars into the market.

The repo squeeze exploded onto the scene again in mid-March as state after state issued stay-at-home orders and mass closures of non-essential businesses in an attempt to control the spread of COVID-19.

On March 18, the Fed recorded a record repo balance of nearly $442 billion. On Wednesday last week, that had plunged to $79 billion after a one-week decline of $88 billion. It was the lowest level since mid-September when the Fed was first forced to intervene in that market. 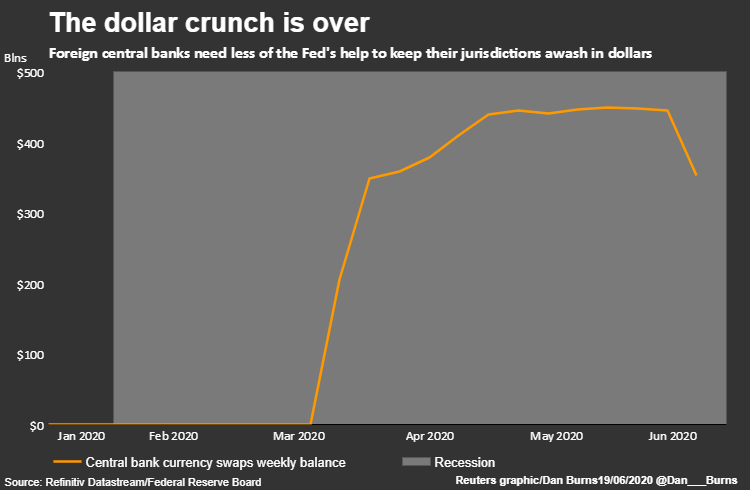 Zoltan Pozsar, managing director, investment strategy and research, Credit Suisse, said in a research note last week that if foreign banks “no longer need the U.S. dollars they took from the swap lines and stop lending in the FX swap market, the Fed will be there to step in with the repo facility.”

The waning demand has come as markets more widely have regained their footing after March’s big swoon. Stocks have recovered around 90% of their losses, companies are raising capital in the bond market at a record pace, and risk premiums embedded in corporate bonds yields are back to where they were in early March.

Dollar funding costs, too, have largely normalized. For investors in Japan and Europe, whose central banks were the largest users of the Fed’s swap lines since March, the cost to access greenbacks to fund transactions is back where it was in late February. 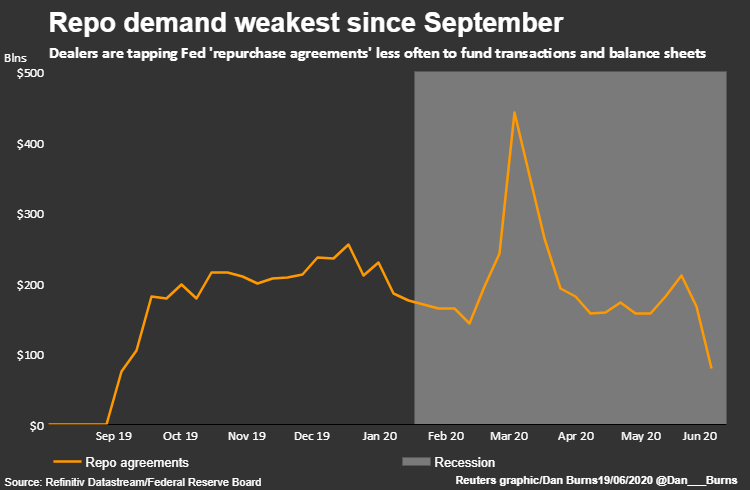 One potential upside to easing dollar-funding pressures is it makes U.S. assets such as Treasuries more appealing, which could support demand for U.S. government bonds amid a record $3 trillion borrowing binge by the Trump administration to fund pandemic relief efforts.

“The cheapening of USD funding has made it more attractive for foreign investors to buy long-dated US Treasury bonds,” NatWest’s Roberts said. “We see this as one measure that would support foreign demand for U.S. Treasuries.”
Source: Reuters (Reporting by Dan Burns and Megan Davies; Editing by Leslie Adler)