Global economic output contracted in August for the first time since June 2020, according to the latest PMI survey data. Although only modest, the downturn reflects an increasingly broad-based deterioration of output and demand conditions both by sector and region. Companies are also taking a more cautious approach to cost control and employment in the face of the worsening economic climate.

More encouragingly, price pressures have abated, with the rate of inflation of firms’ costs having now cooled for a third month in a row to reach the lowest for one and a half years.

The survey data therefore reflect how central banks are hiking interest rates into an economic downturn which, while bearing fruit in terms of helping lower inflation, is adding to the risk of a deepening global contraction and possible recession.

Manufacturing and services fall into decline
Global business activity contracted in August for the first time since the initial pandemic lockdowns of early 2020, according to PMI survey data compiled by S&P Global and sponsored by JPMorgan. The headline PMI, measuring output of both manufacturing and services, fell from 50.8 in July to 49.3 in August, dropping below the 50.0 no change level for the first time since June 2020. If lockdown months are excluded, the latest reading was the lowest since June 2009, during the global financial crisis.

Although at present the scale of the downturn remains far weaker than seen during the GFC, August saw output of both manufacturing and services fall into modest declines, reflecting an increasingly broad-based deterioration of global output and demand growth. 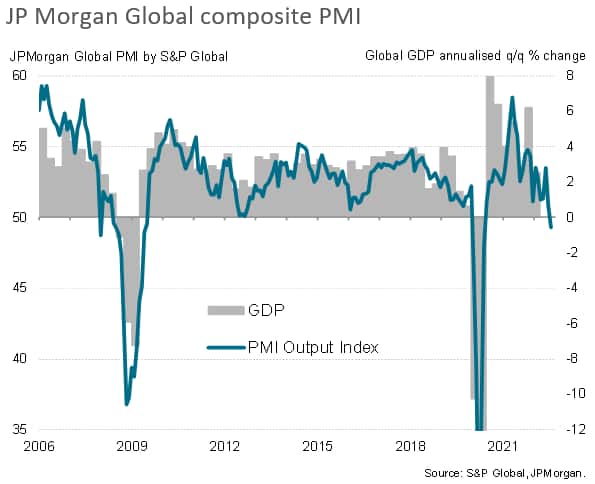 Downturns in all major developed economies
For the first time since early 2020, all four largest developed economies reported falling output. While the eurozone, UK and Japan all slipped into minor downturns, a steeper contraction was recorded in the US. All four reported lower manufacturing output levels, accompanied by either falling or largely stalled service sectors, with the US reporting by far the steepest service sector decline.

Growth trends meanwhile varied among the major emerging markets. While India reported strong and accelerating growth, enjoying one of its fastest expansions seen over the past decade, more moderate gains were seen in Brazil and mainland China, as in both cases robust service sector gains were offset by near-stalled manufacturing economies. In Russia, business activity barely expanded due principally to the impact of sanctions, which drove a further steep downturn in exports of both goods and services. 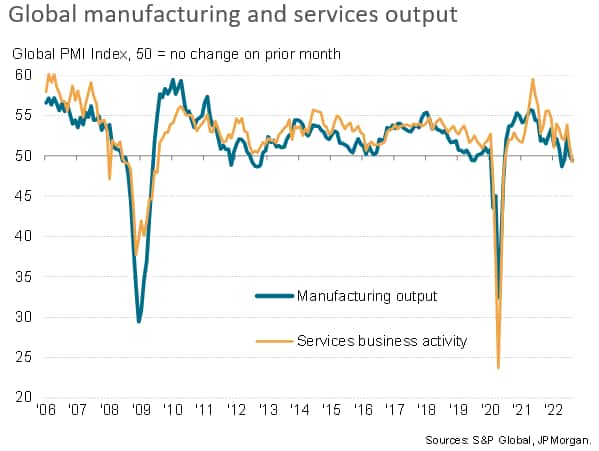 Falling demand
The main cause of deteriorating output trends was a weakening of the demand environment. New orders for manufactured goods fell globally in August, accompanied by a near-stalling of demand for services. Global exports of both goods and services also fell, leading the downturn in demand.

The principal cause of lost orders was higher prices and the cost-of-living crisis, as well as increased risk aversion from both households and business due to the darkening economic picture. Some countries also saw reports of higher interest rates hitting demand (notably in the financial services sector, and real estate in particular). 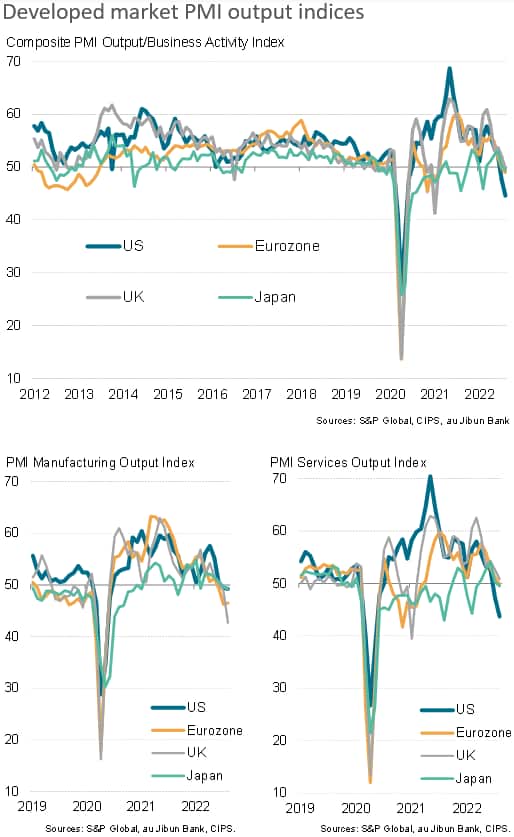 Excess capacity signals
Not only did inflows of new orders fall during August, but backlogs of work also declined, as the reduced influx of new work meant operating capacity levels were only maintained via the depletion of work placed in prior months.

Such a running-down of order book backlogs has two key implications.

First, lower backlogs are usually followed by a slowdown in hiring as firms take a more cautious approach to staffing levels. August saw global jobs growth slacken to the weakest since January as a result.

Mainland China reported the gloomiest labour market trend, with a further contraction of payroll numbers recorded in August. Employment growth slowed in all other major economies with the exception of India, which saw faster jobs growth. 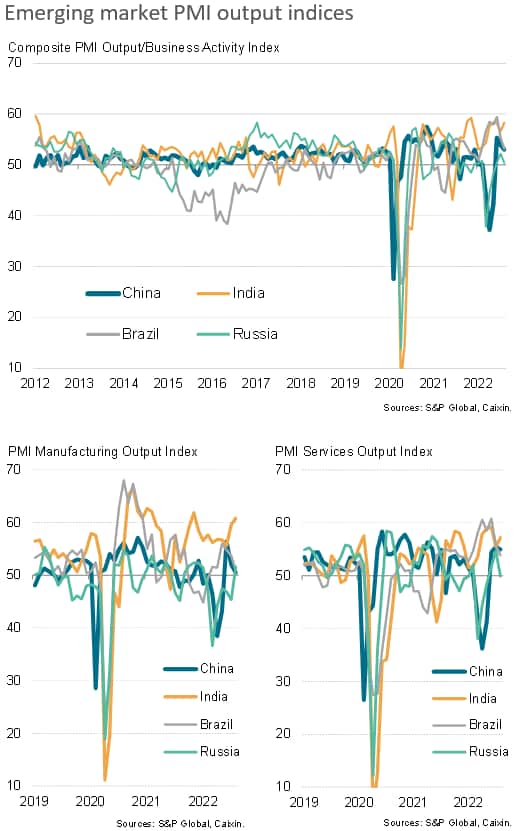 Price pressures cool
Second, the drop in backlogs of work speaks to a wider issue of the demand and supply imbalance, and the resulting impact on prices.

Whereas 2021 was characterized by demand running ahead of supply, with the latter constrained by pandemic-related raw material and labour shortages, 2022 is seeing a reversal of this imbalance: demand is now falling and supply conditions improving. Hence price pressures are abating, both for goods and services. 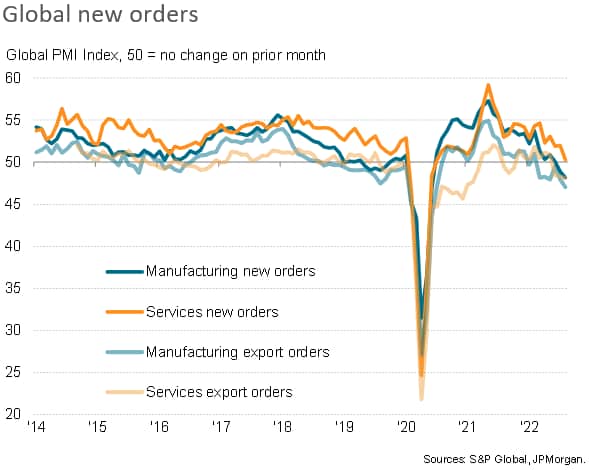 Global input cost inflation has in fact now eased for three successive months to run at the lowest since March 2021, albeit remaining elevated by historical standards. 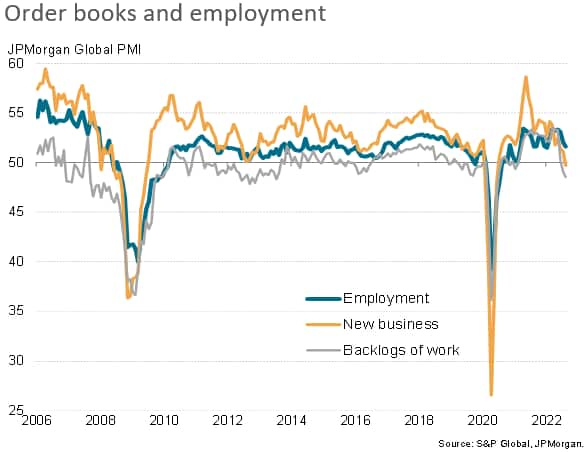 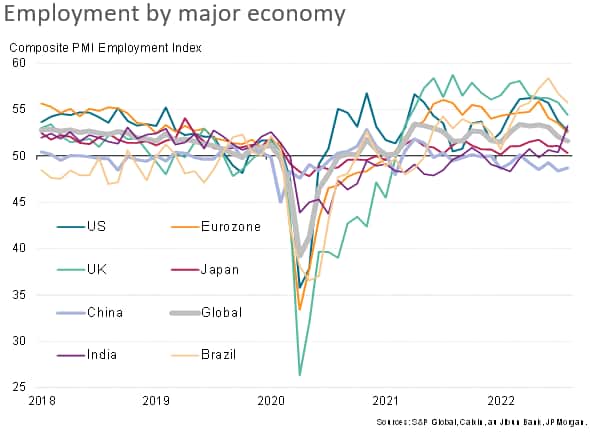 The August PMI surveys therefore suggest that global consumer price inflation should start to moderate in the months ahead, as lower cost pressures feed through to lower wholesale prices and eventually filter through to the consumer. 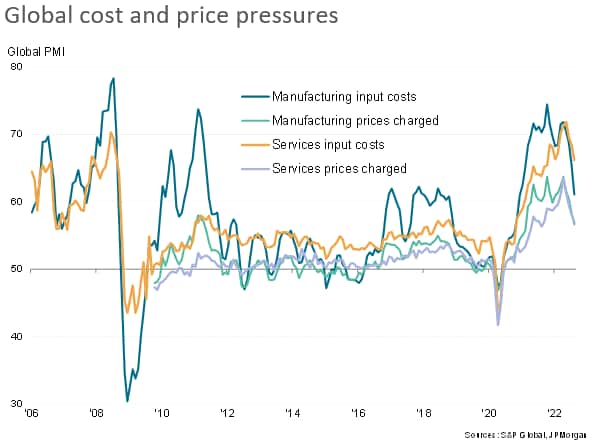 Hiking into a downturn
The cooling of price pressures has followed the most aggressive monetary policy tightening seen across the world in modern history, with policymakers at the FOMC, ECB and Bank of England in particular ready to implement further rate hikes in the coming months to further tame inflation expectations, even at a cost of lower output. 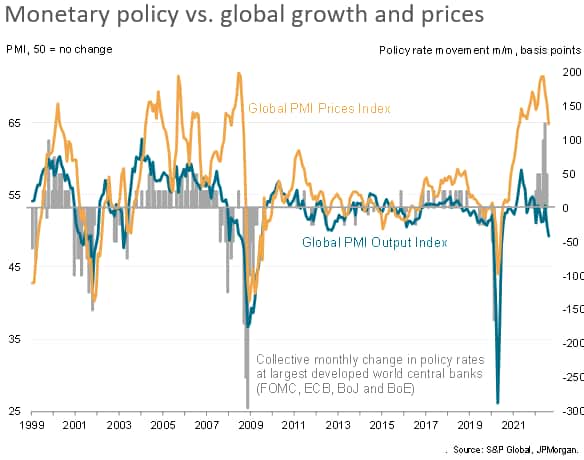 In this respect, the survey data clearly highlight the extent to which the global economy is starting to strain under the destruction of demand caused by high prices and tightening financial conditions, depicting an unprecedented scenario in recent history of central banks hiking interest rates aggressively in an environment of growing recession risk.
Source: IHS Markit by Chris Williamson, https://ihsmarkit.com/research-analysis/global-economy-slides-into-contraction-price-pressures-ease-to-1-year-low-August22.html